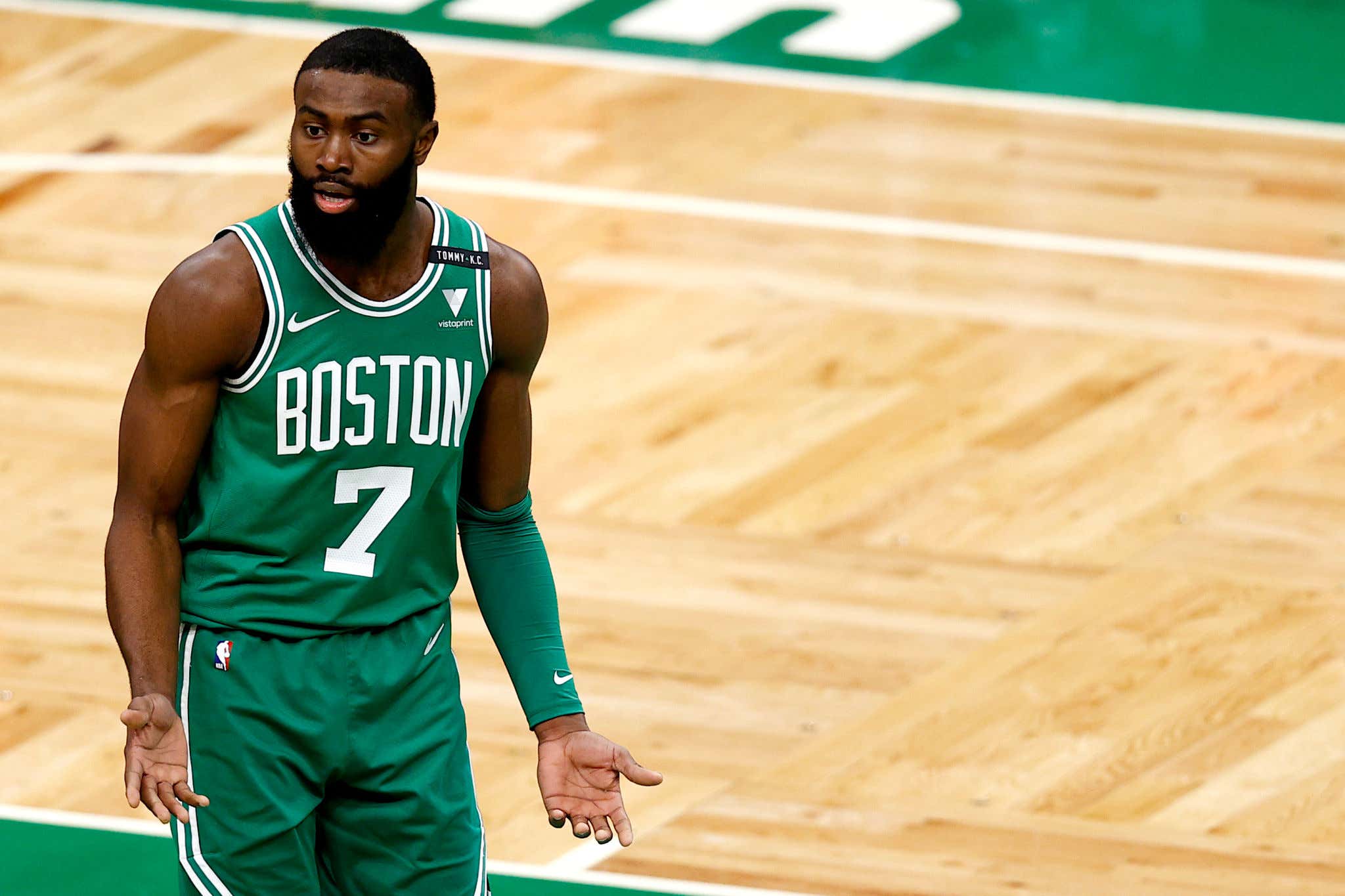 Coming off the Nuggets win, if you remember in that blog I talked about how seeing the Celts respond to a slump wasn't all that new. We've seen them drop a few and come back and beat a good team before. What really mattered was if we would finally see them build off a good win against some lesser competition and build momentum. That's where the struggle has been basically all season.

The answer? No, no they would not.

When the most consistent thing about your season so far is the fact that you are inconsistent, that's pretty much explains what happened. Down three starters sure, but given everything that's happened over the last month, a game where both of the Jays are playing, that's a game you need to win. You can't talk about how you will eventually turn it around if ya know, you are losing all of these opportunities against lesser teams that will help you turn it around. Especially when your two best players are playing.

Now, as always, perspective is important. It's not an excuse so realize this was a B2B and the Celts were without three starters (two if you don't want to count Smart since he's been out for a while). Some might call it a schedule loss. I dunno how to feel about that really. I can understand that, but last night was still annoying as fuck. Where I have trouble is some of the reasons for this loss have nothing to do with the fact that it was a B2B. The Celts need to play better, period. Not just the bench, but the best players as well.

Through 28 games we know that on certain nights this team can beat any team in the league. We also know that on any given night they can't beat the worst teams in the league. That's what being inconsistent is.  I'd prefer they stop doing it if we're being honest.

I wouldn't but this loss in the same category as what we saw against the Wizards. That was a team that quit. That's not what happened last night, so let's talk about it.

- Despite coming in a loss, it was just nice to see Jayson Tatum shoot the ball well. He's been in a brutal 6 game slump and frankly he needed to see the ball go in

This was the version of Tatum we all know and love. The one who not only was making his fadeaways and threes, but also the one that got to the line (11 FTA). His playmaking continues to improve and I thought he was much more engaged defensively last night. Of all his matchups against the Hawks, he allowed just 2 points. For someone who has had some issues playing with a full effort as of late, it was nice to see Tatum have his best game in what feels like forever. Hopefully, that's here to stay.

- There is no denying that there are holes on this second unit that need to be replaced, but that is most certainly not the case when it comes to Payton Pritchard and Rob Williams. They were great. Rob was active as hell, had some really nice rim protection and finishes at the rim

and he continues to make the case for more minutes. I'd say on the whole he's had a pretty good season, it may just be time to fully unleash him.

With Pritchard, I mean what more could you ask from your backup point guard. I'll take 11 points on 5-11 shooting off the bench in 22 minutes. His issue was foul trouble late which was unfortunate, but you know what you're getting with Pritchard. He was the best guard on the team yesterday. Together these two had 19 points for the second unit on 9-16 shooting. They showed up.

- Aaron Nesmith continues to look like he belongs. His motor is crazy, his defense is way better than everyone makes it seem, and it's time for him to be a regular in the rotation. While I think Javonte is very cool, there's no reason why Nesmith shouldn't be getting his minutes. He's most definitely earned more time.

- If you were to look at points in the paint in this game, it's not pretty. I'm talking a 60-46 advantage. Now to someone who maybe didn't watch the game you might see that and say "wow, where is the rim protection????". But that is misguided. Rim protection wasn't the problem yesterday. The problem was perimeter defense. There was no resistance up top. That's not on Rob or Tristan, that's on the guards/wings. When you do nothing to prevent dribble penetration, teams are going to feast on you in the paint. I mean the matchups tell you everything you need to know.

Javonte Green got the start at guard, in hopes that his length would maybe be able to slow down Trae Young. Well, Young went 4-4 for 11 points against Green, only making 1 three. He basically got wherever he wanted on the floor no matter who was guarding him. This was Young's shart chart last night 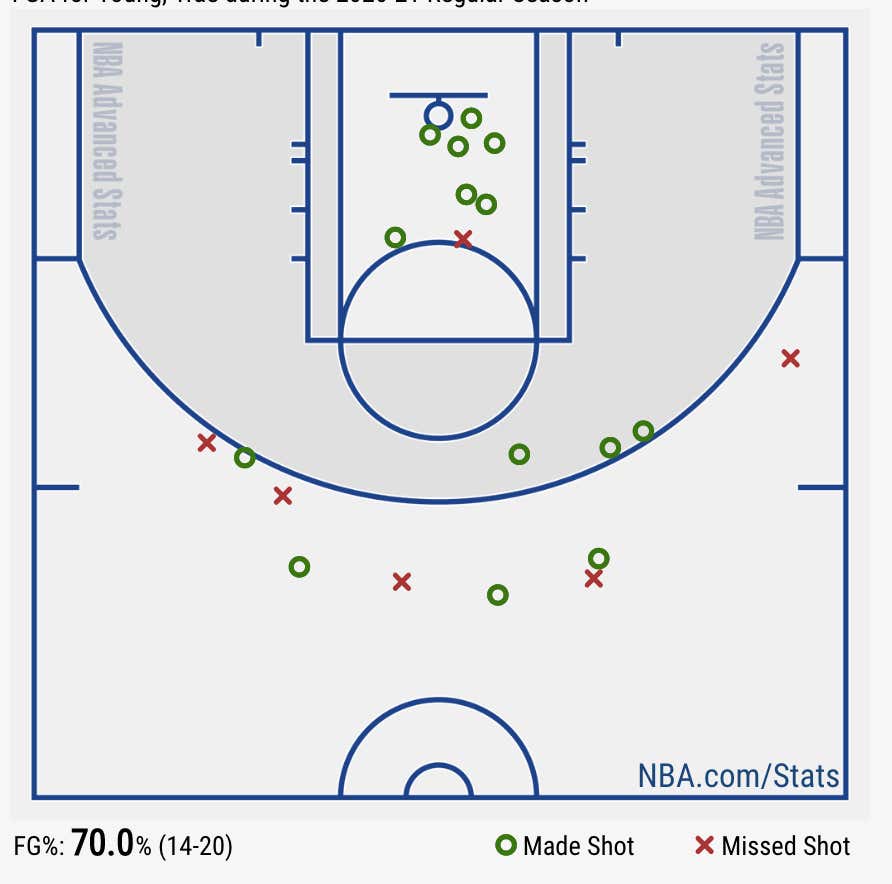 - Speaking of Jaylen, tough time for him to have a 6-20 night. Down guys, on a B2B, that's when this team needs both Jays to deliver. If we want to talk about them like the All Star/All NBA players they can be, that comes with elevated expectations. Instead, we had one of Jaylen's worst shooting nights of the season. He's been consistent enough for us to know it's most likely a down night, but when you desperately need his offense, off nights like that can't really happen.

We also learned that unlike Tatum + the bench which usually is OK, the same is not true for Jaylen. Him paired with the second unit had a 57 Ortg / 111 Drtg / - 54 net rating in their 4 minutes of action last night. It didn't matter what combination of bench guys you paired with Jaylen, they all struggled. Even if they were for low minutes, those minutes were very costly. At least now we know.

- I don't think it's an accident that against the Nuggets when we didn't see Grant or Jeff Teague the Celts looked better, and then against the Hawks last night we saw Grant play 22 minutes and Teague 9 minutes and well…we know what happened.

I understand that guys were out, but this is where I go back to Brad. It's not about him motivating, that shit is stupid. If you want to question him, this is where you have some juice. There was no excuse for Grant to play more than Rob in this game. He was a disaster from the minute he stepped on the floor. Even if you HAVE to play Grant, 22 minutes is way too much.

We'll get to Teague in a minute, but I saw both Carsen and Tremont be DNP-CDs. Are they better options? I sure as shit know they can't be worse! Carsen even gives you the option of maybe getting hot from three in a game where you needed additional shooting. Pritchard barely played in the second half due to foul trouble, but the answer cannot be 9 minutes of Jeff Teague when you have two other available point guards on the roster. It just can't.

- Everyone knows if you can't defend, you won't win. How bad was the Celts defense last night?

Oh that's fun! Only one of the best shooting performances over the last 10 years. Christ is that annoying. I don't think it's crazy to say a lick of defense would have made all the difference in the world in this game. The Celts never held the Hawks to under 28 points in ANY quarter. Who are you beating with that type of defensive effort? Nobody, that's who.

It just didn't feel like the Celts made the Hawks feel them defensively. They were reactionary. Sure you have to credit the Hawks for knocking down shots, but it's not exactly hard for an NBA team to make wide open looks (unless you're the Celts amirite?). Their defense has probably been their biggest issue all season, and they won't turn around shit until they figure it out on the defensive end.

Yes, missing Smart and Theis impact things here, but there were enough good defenders available for this team to hold a Hawks team to better than 57% shooting. Don't let those guys off the hook.

- Let's talk about the fourth quarter. Probably not the best idea to start the most important quarter of the game with three straight turnovers. Worst part? They were coming from your best player.

Of the team's 16 turnovers, 6 of them came from the Jays. Tatum's brutal fourth quarter turnovers as the team is trying to make a comeback just can't happen. It's felt like their handles the last few games have been pretty brutal, and that's a bit of a problem given their high usage.

Add to it that nobody could guard Young in that quarter (16 points), and it was just a disaster all around.

- Which brings me to Jeff Teague. I'm sure he's a nice guy. This isn't personal. I just need him off my favorite basketball team. Hand up, I loved this signing when it happened. In theory, it was an upgrade over Wanamaker with a player that most thought could give this team something off the bench. Holy fuck was I and a whole lot of other people wrong. He comes in and immediately turns it over. He can't make a shot, he finished with 3 TOs with two more coming in the fourth quarter, and he's giving you nothing defensively.

I'm sorry, but there is no way this is better than what someone like Isaiah can give you. It just can't be. There is no way Ainge can look at Teague's play and think it warrants a roster spot. Eat the dead money if you have to, that has to be addressed. If he's not going to be able to kill in during the non Kemba games, well then why is he even on the roster? It's been a disaster signing ever since the home opener. He doesn't look like a functioning NBA player. I don't want to be mean, but those are simply the facts.

This is why back up point guard is so high on my list for the trade deadline. We saw last year what no bench guard depth did for the playoffs. That has to change and guess what? It won't even take a lot to get better! Literally anyone would be better.

We're still waiting for this team to show us any signs that they can play anything that resembles a consistent brand of quality basketball. They've been fortunate that the East is pretty bunched up at the moment, but the way they are playing is not good enough. I dunno who could argue it is. With Theis and Kemba hopefully back tomorrow night, I imagine that'll make a difference. Even still, this shit is annoying and it has to stop.