Statues of four U.S. presidents among 41 under the microscope by Chicago committee.

Mayor Lori Lightfoot is confronting the “hard truths of Chicago’s racial history,” launching a public process to review the fate of 41 statues and other monuments, including some of former presidents Abraham Lincoln, George Washington, Ulysses S. Grant and William McKinley.

Six months ago, Lightfoot ordered two statues of Christopher Columbus “temporarily” removed in the middle of the night after receiving “intelligence that gave us great concern” something bad was about to happen.

At the same time, the mayor argued Chicago statues of Columbus in Grant and Arrigo Parks vandalized repeatedly since the death of George Floyd should not be torn down, but rather used to confront the nation’s history and trigger a “reckoning” that’s long-overdue.

City Hall then launched the Chicago Monuments Project and created an advisory committee to conduct a comprehensive review of more than 500 Chicago statues and monuments, with an eye toward identifying those that were offensive, problematic or not representative of city’s values of equity and justice.

Reasons for making the list include promoting narratives of white supremacy; presenting an inaccurate or demeaning portrayal of Native Americans; celebrating people with connections to slavery, genocide or racist acts; or “presenting selective, over-simplified, one-sided views of history.”

Besides five statutes of Lincoln, others on the list include the General John Logan Monument in Grant Park; the General Philip Henry Sheridan Monument at Belmont and Lake Shore Drive; a statue of Benjamin Franklin in Lincoln Park; the Haymarket Riot Monument/ Police Memorial at 1300 W. Jackson Blvd; the Italo Balbo Monument in Burnham Park; and the Jean Baptiste Beaubien plaque at the Chicago Cultural Center.

I know a lot of you think I'm going to tear Mayor Lightfoot to shreds over this.

That I am triggered, by how triggered this many people in the City of Broad Shoulders have become.

In fact, I couldn't agree more with the Mayor.

This issue is so critical and important that it should be moved to the very top of the priority list.

We definitely DO NOT need to worry about the 72% increase in murders in this city over the past year. (344 to be exact)

We definitely DO NOT need to worry about getting small businesses re-opened.

We definitely DO NOT need to worry about the out-of-control carjackings taking place over the past year with no end in sight. (Chicago is on pace to see 1800 carjackings in the last year)

We definitely don't need to worry about our dwindling population. One of the only cities in the country that has continued to decline year after year. Yet the shot callers can't seem to figure out why...

We definitely do not have worry about being recognized as "the most corrupt city in the United States".

And we definitely don't need to worry about using taxpayer funds for studies like this. I mean we're only $86.9 billion in debt as a city. That's not that much when you really think about it.

What we do need to focus attention on, and worry about, are statues.

Statues of dead people, that 99% of the uneducated population wouldn’t even know or recognize the names of without the help of google.

The same names that would mean absolutely nothing to them if not for "projects" like this that let everybody know why and how these people were bad, and why they should be erased from history.

Can you believe there are FIVE statues of that bastard in this city? I know the state is literally nicknamed, "The Land Of Lincoln", but five statues is a little much don't ya think?

The man didn't do much to be recognized and honored when you really think about it:

Was self-taught, and as self-made as they come.

Saved the country from dividing, and persevered The Union.

Issued the Emancipation Proclamation, abolishing slavery and freeing slaves in the United States.

Issued the Gettysburg Address. Only one of the greatest speeches in the history of humans.

Big deal. The Mayor's little pet project labeled these five statues and the other 36 "problematic" because

And Chicagoans have pointed out the city has extremely few monuments to women and people of color.

(Fun Fact - Lincoln had a history of arguing against slavery even before he was a senator, and actually lost his second senate race because of his outspoken opposition to the expansion of slavery into the western territories in public debates held before the election.)

But why let facts get in the way of things? That's not how the outrage police operate.

My issue is the Mayor's Chicago Monuments Project committee made a glaring omission, that I, as a triggered Chicagoan, want to be righted. And I want it made right right this instant.

This reprehensible statue that stands at the entrance of Oz Park in Lincoln Park needs to go. If you've ever lived in Lincoln Park or driven through, you know which one I'm talking about. I don't even have to say it.

How the city ever at a point, thought it was smart to erect a statue of a spineless, HEARTLESS, man like this just boggles the mind. 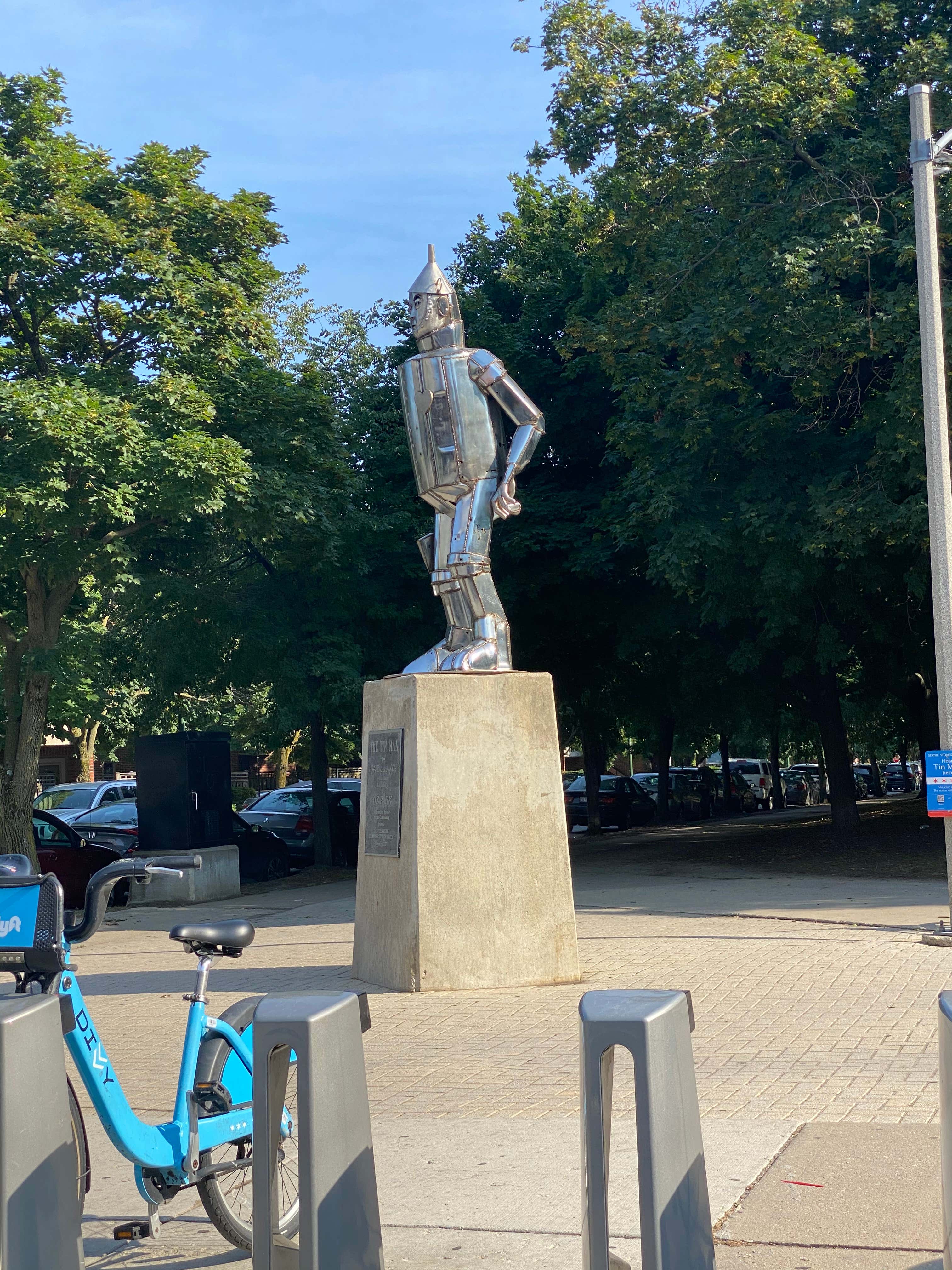 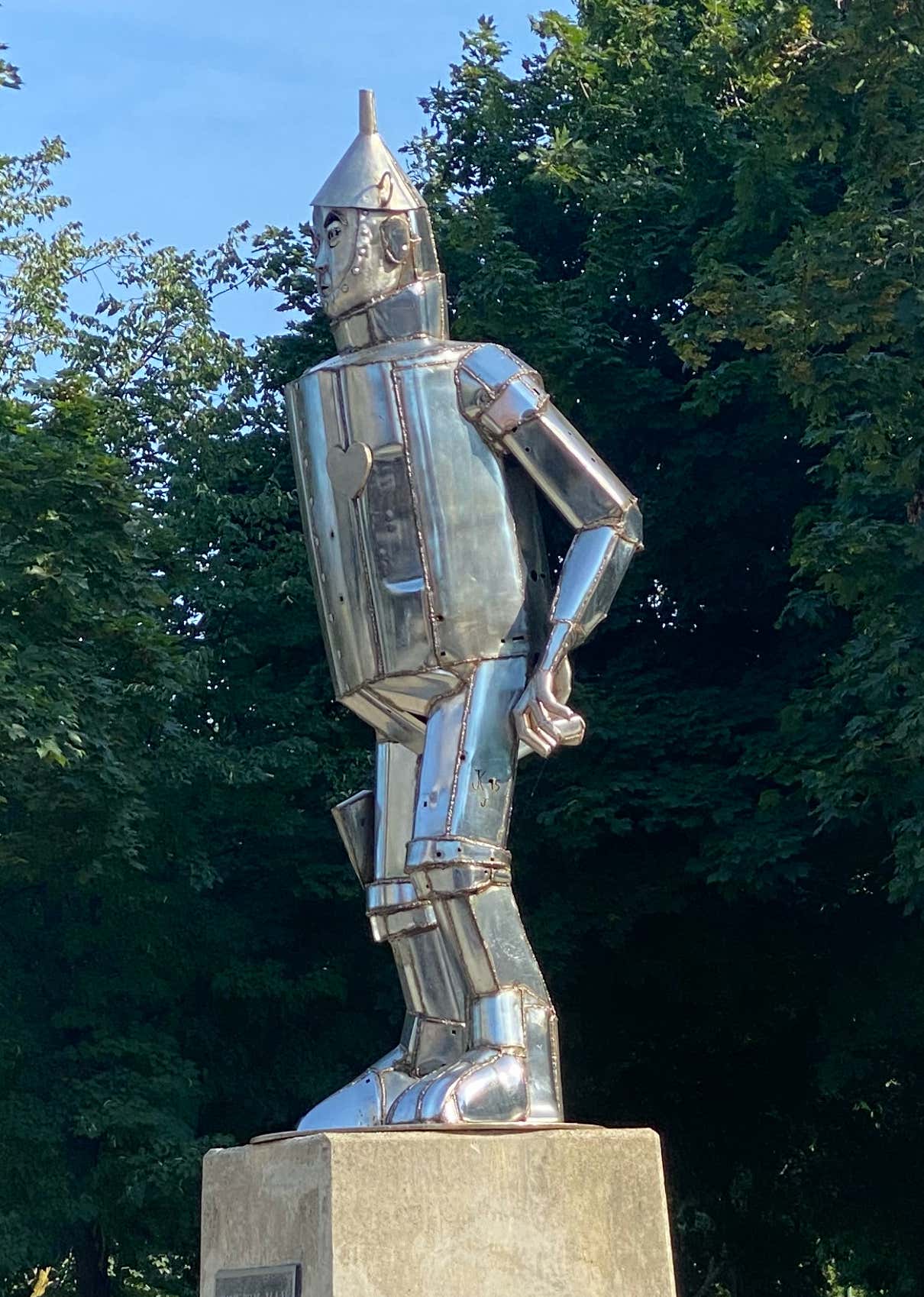 Back this summer when anarchists were attempting to topple the Columbus statue downtown, I couldn't come up with any ways that I, somebody born 500 years after the guy, could find to be personally offended by, that he did. I used my brain and understood that yes Christopher Columbus and his 3 ships of western Europeans from Spain and Italy were pretty ruthless to the indigenous people inhabiting this continent. The Native Americans were treated horribly no doubt about it. But it's no secret that 500 years later they are still treated fucking terribly. Why aren't these people that are apparently so passionate about indigenous people expending their energy on helping them to get better land, schools, health care, and infrastructure for their reservations today? Strange.

So I looked elsewhere for things I too could be triggered and outraged by, and on one of my trips to Dairy Queen, while waiting for my order to be ready, boom. This monstrosity was staring me dead in the face.

This callous pussy deserves no statue. In fact, I think we should take a page from the anarchists playbook and just flat out erase him and his whole sordid Oz story from the history books. (Throw in Wicked too while you're at it.)

So please, join me by heading to https://chicagomonuments.org/ and demanding that they add the Tin Man statue at Oz Park to the list of problematic statues.

If you have anything else we can find to be outraged about please let me know. The City needs every dollar it can get so if we can help them by doing the leg work we might get to be in one of Lori’s next hip social media videos.

p.s. - In all seriousness, I can't recommend reading or watching anything you can get your hands on about Abraham Lincoln enough. There are so many stories involving him that will make you say "wow". One of my favorites comes from the Mike Rowe (one of my favorite people on the planet) podcast That's The Way I Heard It and it's about how he was challenged to a duel by James Shields (the Senator, not the shitty pitcher). Hamilton style. Lincoln was publicly criticizing him through newspaper editorials under a pseudonym, and convinced Shields to not use pistols, but swords instead. Duals were illegal in Illinois, so they had to go across the border to Bloody Island, Missouri (real name). Lincoln showed up and towered over Shields by almost a foot. He had super long Rajon Rando like arms so his reach was even more advantageous. He took a few practice swings at a tree and took down a few giant limbs before turning around to face Shields who by that time had extended his arm asking for a truce. What's even crazier is James Shields would go on to not only become great friends with Lincoln but one of his biggest public supporters. I highly recommend listening to the podcast episode, its told much better.