The NBA scoring swings just don't get enough mainstream media attention in my opinion. I distinctly being a younger man in his early 20's learning the hard way that a 20 point lead with 3 minutes left in a 3rd quarter means absolutely nothing 9/10 times. They don't teach that to you growing up but then you start racking up gambling losses and learn real quick: nearly every NBA spread comes down to those final 3 minutes. You are powerless to the peaks and valleys of an NBA scoreboard roller coaster. Without a doubt the easiest sport to gain fake confidence and thus also the easiest sport and league to hold out hope when your team is getting their absolute tits blown off their chest. 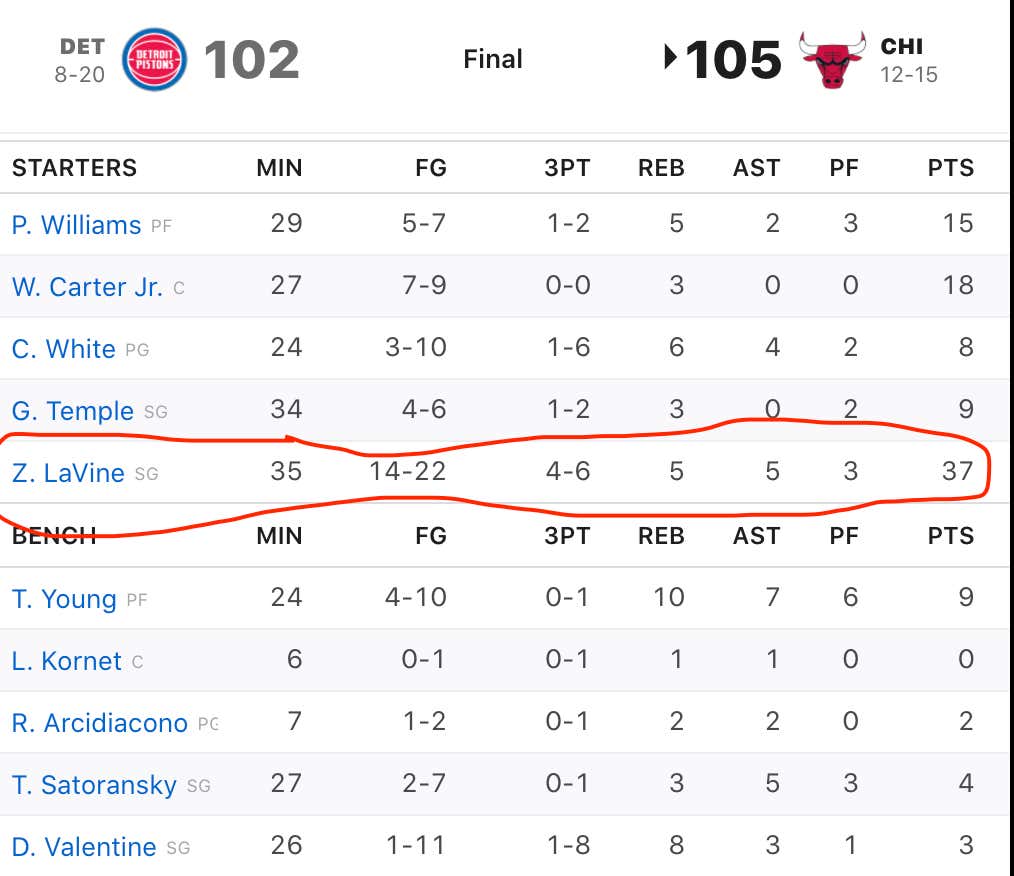 Zach LaVine is out here to score some mother fucking points and let me tell you folks: not much can stop the guy. Trae Young is averaging twice as many free throws while taking 20% less shots from the paint. Honestly can someone tell me how that works without inciting collusion against Zach LaVine? You can't. I want an investigation.

End of the day, it doesn't matter. Bulls get another win and move to 12-15 which could just as easily be 17-10. Everyone knows that but I won't belabor the point. Mix in a healthy Lauri and some momentum heading into the break and we could be talking about a very confident 7th-seeded Bulls.

- Patrick Williams is only 19 and he's out guarding Kawhii (while getting roasted) one night then burying dagger threes the next. What a ride for the rookie from FSU who continues to pile up big minutes under Billy D. With all the uncertainty about the roster the next 2-3 years, it's pretty safe to assume he's going to be our guy throughout. You hope his few notable late moments wash away the sting of a -14 +/- through the first 3 quarters. Let the fucking kids play right?

- Credit to Billy D for basically always have these guys coached up. I would personally subscribe to an exclusive coach's cam only that just followed Billy D pacing the sidelines and making subtle adjustments through eye contact and stern hand directions. He's definitely a screamer when he needs to be but there's a much stronger dad vibe to his attention grabbing. A simple hands-on-the-hips with an adjoining head nod has been known to tighten up most Bulls defenses this year. And just like that he's quickly becoming one of my favorite coach's in recent Chicago history. Like even now I'm still surprised that Billy Donovan is coaching my Bulls.

- Short list of guys I'd feel more comfortable with: Pop and maybe Steve Kerr but honestly I'm throwing BD into the Tier 1 group. I know he hasn't earned it at this level but he's on my list and you'll just have to deal with it.

- Bulls 2nd unit is just so good and balanced comparatively. I feel like a lot of teams have it flip flopped from the Bulls. All the young guys are in the 1st group getting worked up and down the court trying to hang on for dear life. Then we bring in Sato and Thad and they just WORK the other team's 2nd group. Garrett Temple spreads the floor (even though he starts) and while Denzel sucked tonight (1-11) he was still a +9 which says something about the 2nd unit he's running with. If that's the strategy - great. Sound a lot like the Hawks.

Overall just a great win on a weird night under weird circumstances and shitty travel home from Indy. They get tomorrow off then regroup Friday for a Sixers matchup that should get a lot of attention. It's one thing to grind out shitty wins against the Pistons on short rest. It's another to come back and play the Sixers tough.

Personally I'm too invested at this point to see anything other than Red. Naturally that means I like the Bulls.