WOW! Deke Zucker tweeting something to fit his simp narrative? #THISLEAGUE!!!!! But not only that, get a load of noted courtside seat basketball observer David Portnoy saying "Ben Simmons hasn't done DICK."! And he must be RIGHT! I mean, Lord Portnoy started Barstool Sports! I repeat, Barstool SPORTS! Just look at our Lord And Savior go on the Jim Rome Show while being an expert on, among other things...SPORTS!

That's one BAD MAMMAJAMMA!  As the biggest #TeamPortnoy guy in the world, what Lord Portnoy says - GOES! Not only does Ben Simmons never DO DICK, but Smitty is a F-R-A-U-D FRAUD!

I KNEW IT! Where does Smitty GET OFF defending Ben Simmons when he FOR SURE trashed him in the past! Sure, at Barstool SPORTS you can claim you bet MEGA UNITS, not before it or even during a close contest, but at the END when the outcome is basically decided, but you can't defend a hometown star when you FOR SURE trashed him in the past! Dumdum Fortnight Boy thinks everyone forgets what he says the instant he says it, so I'm here to EXPOSE him for the hypocrite he is! Look at all of this vitriol HATE by Smitty directed towards Ben Simmons over the last half decade! 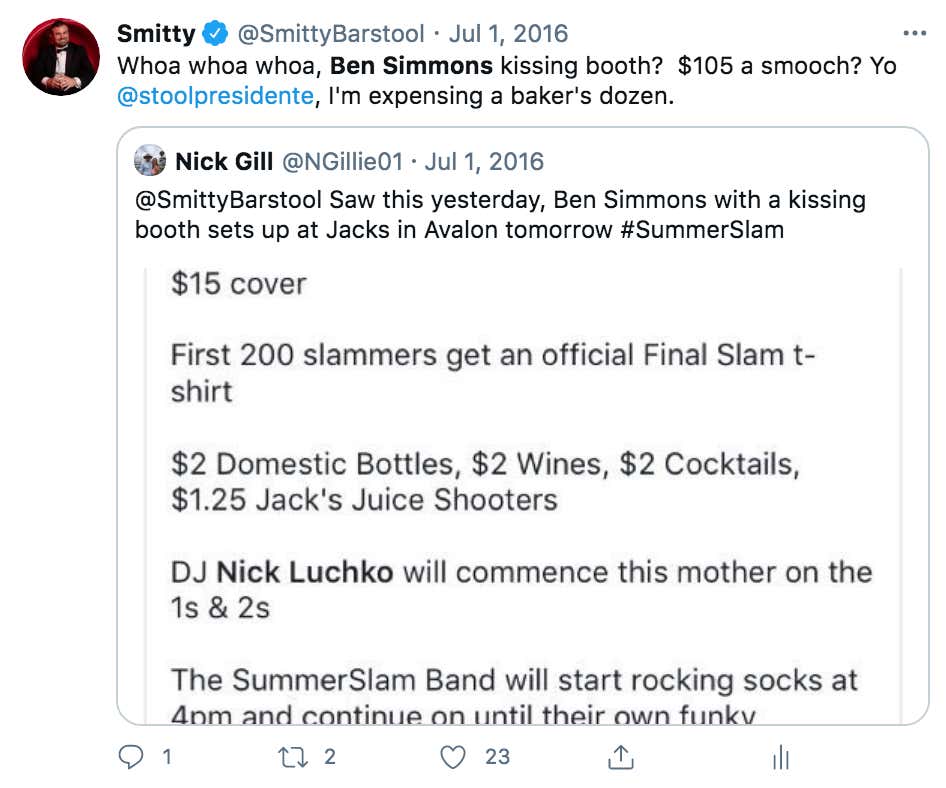 What a FRAUD! Comparing Ben Simmons to or greater than God multiple times? Yeah, only cause Smitty thinks Simmons is the ANTICHRIST! Read the Bible one time, heathens! I bet Smitty probably only wanted to kiss Ben Simmons in '17 to give him some sort of plague and run him out of town, too! Stick to video games ya DINK!

Oh well! Follow the true ones who are UNDEFEATED on takes when they're allowed to make their picks and arguments when the outcome is decided! #THISLEAGUE

As for Smitty, keep on being a FRAUD stan for Ben Simmons at your useless Philly Podcast him and Rone have that - HA - isn't even an official Barstool podcast!!! Who cares if people listen and like it, imagine being LOSERS who can't even just get a Barstool podcast handed to them for no reason whatsoever and who actually try to earn their keep! LOLz!!!!!