I could just as easily sit here and bitch about how Illinois let a very bad Northwestern team hang around all 2nd half. I could very easily complain my way to a few hundred words and a below average night of sleep. I've been there before and it's in my wheelhouse but quite frankly that would be a waste of time. Fact of the matter is Illinois survives another threatening conference game and that's the positive.

Here's another: they now get to 11-3 and thus however many games behind first place Michigan. Before tonight it was a 0.5 game lead and science/math says a win tonight means they're tied for the conference lead. But Michigan is 9-1 in conference with a handful of postponements and now I'm getting confused. So let's just agree that Illinois has a good look at a Big Ten championship as we get deep into February and that's outstanding news.

But really deep down the biggest thing to me is Ayo showing up those last 2 minutes.

I spent a lot of time on the IG live pregame show talking about how Ayo has to be mentally exhausted with having to shoulder the team down the stretch time and again. You imagine heading into tonight he would just like to take a night off. Maybe get a deep dish from Papa Del's on the way home and just relax because he's been doing so much. Tonight's a good chance to rest those legs with a 5 game/9 day stretch looming into early March.

It would be easy for him to check out under these circumstances and honestly he did for most of the game. Not pointing fingers but just as bad as the IU game a few weeks back and that's completely understandable. The frontrunner for the National Player Of The Year is allowed a night off especially after willing the team to an OT win over the weekend.

AND EVEN SO he still found the strength to bury Northwestern at the very end:

There's literally nothing you can do about that shot. It's actually elite. He can pull up in your face and do things you traditionally don't see from a college basketball player. It's not time to speculate about his future but to me this guy is just the total package in the Big Ten in the same way Evan Turner did everything. There's your comp. One of the most dominant Big Ten players of my life.

Moving on you really love the way the schedule shapes up even if it's stacked with short rest. Some very winnable games and a chance to run the table if they can get hot. Not demanding perfection but they have the tools to do it and that's not news to the team. Everyone walking around that program knows they can win a national title. Rico Bosco said so himself on Red Line Radio last week. 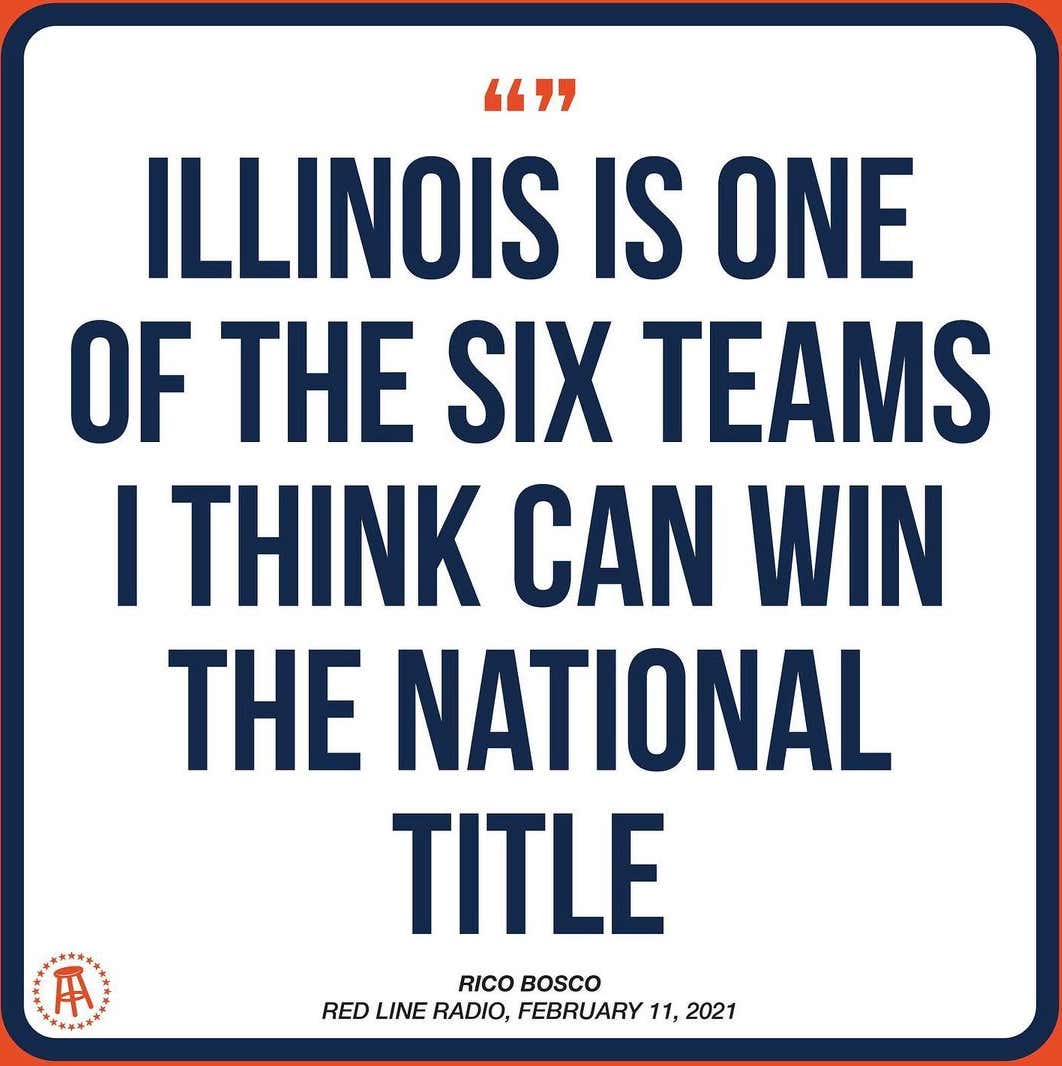 You can catch full interview here:

In other programming notes I'll be on clubhouse doing daily sports stuff. It's a new app where you can do Q&A and hang out and have good conversations about stuff. Seems like a natural fit to get more shine to Illinois basketball so keep your eyes peeled on that.

We'll also be in studio tomorrow for another Red Line where we'll spend more time on the boys. It's about to be that time of year and I want everyone rolling into March on the same page.