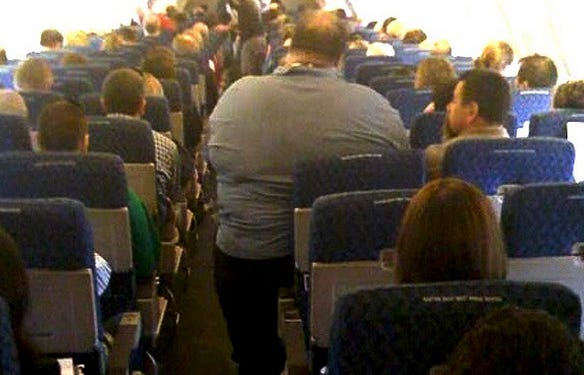 Breaking 911 – James Andres Bassos is suing Etihad airways after he claimed he has suffered back pain as a result of sitting next to an obese man on his flight. He said that during the dlight from Sydney to Dubai, he was forced to contort his body for extended periods of time because of the “grossly overweight” person in the next seat. He also says that he complained to airline staff during the flight asking if he could move seats, but claims airline staff refused. After half an hour, he complained again and he got moved to a crew seat. The court then heard that he had to return to his original seat later for security reasons, the first time for another hour and then for the final 90 minutes of his flight. He alleges that as a result of the flight he has sustained a back injury and has also aggravated an existing back condition and is claiming damages for personal injuries.

Fat people and planes do not mix. I’d rather sit next to a crying baby than a big fat fuck. Fat people can’t breath, they’re messy, they generally smell terrible because they can’t wash between their fat rolls, just a mess. And the last thing (ok, second to last thing if you catch my drift) you want to see walk onto your airplane is a fat person. Oh yea sure, this metal tube is just going to fly through the air at a million miles an hour, let’s bring a 500 pound bucket of lard on board too. No fucking thanks. Fat people shouldn’t only have to buy multiple seats but there should be a weight limit to get on the plane at all. How many more backs will have to break until we say enough is enough? Hope this guy wins every lawsuit he files. Set a precedent and start a revolution.