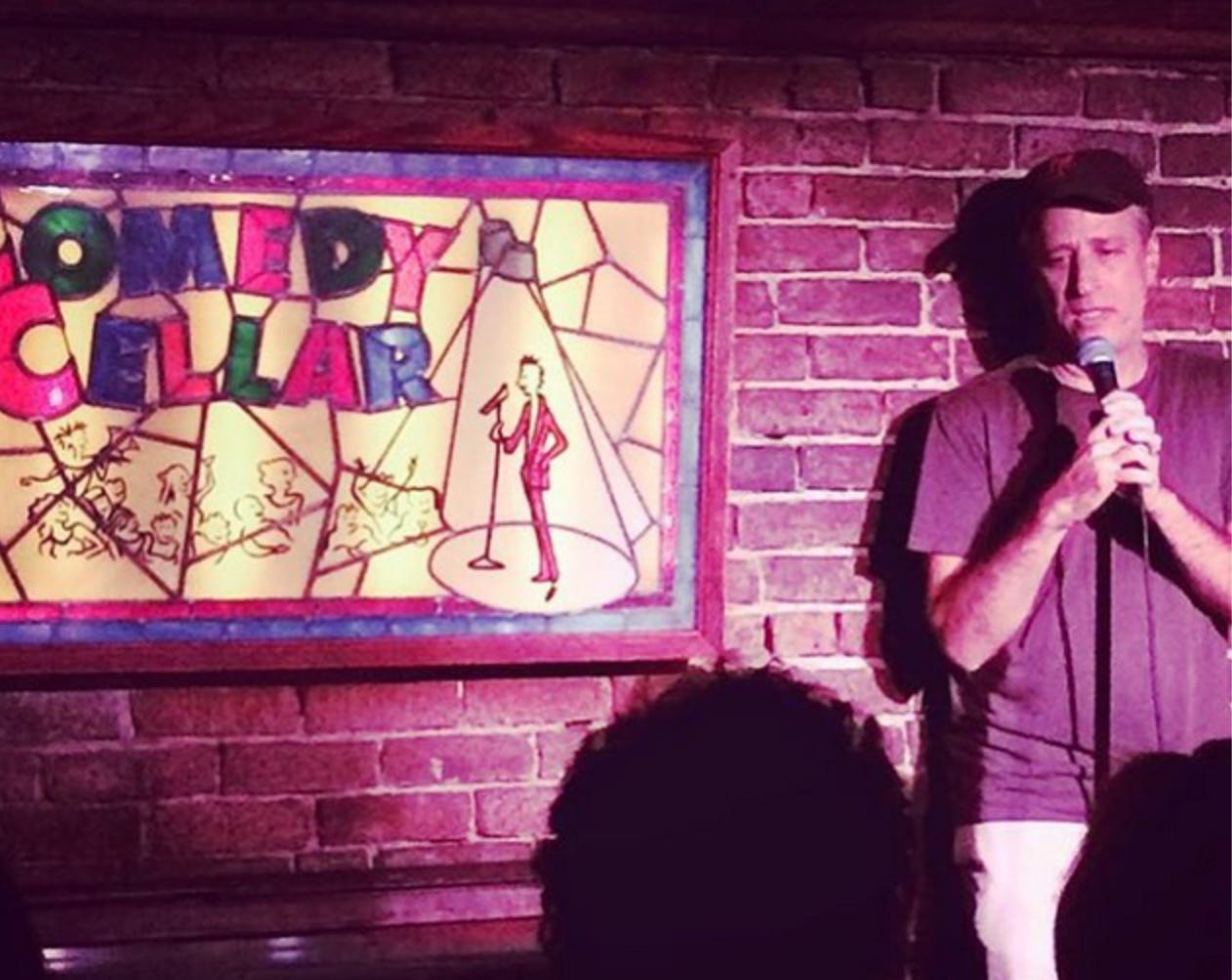 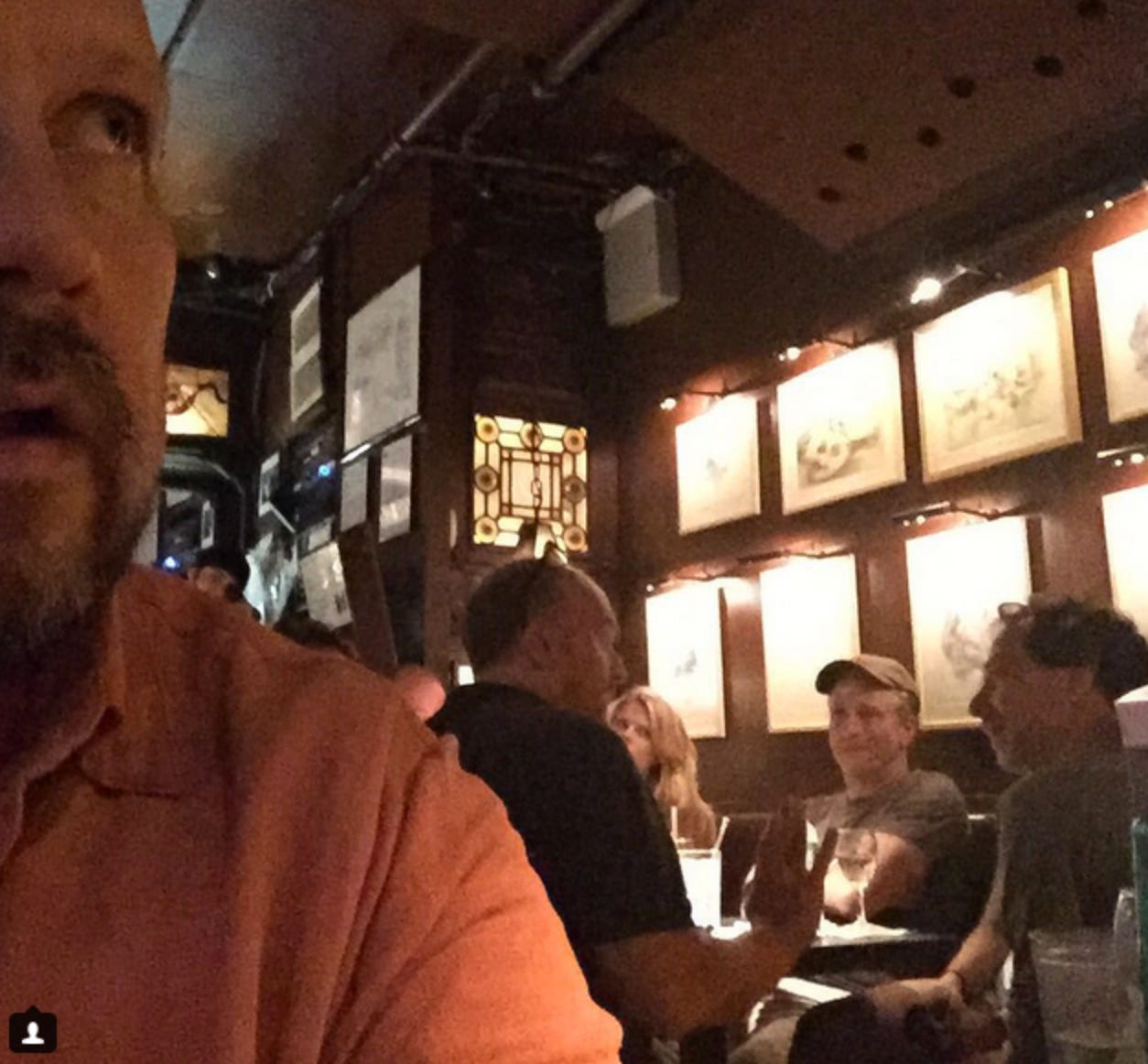 The Comics Comic – As Comedy Central viewers watched Jon Stewart on The Daily Show concocting a fun story about why he’d ever have a secret meeting with President Barack Obama, patrons at The Comedy Cellar in New York City were privy to an even rarer treat Wednesday night — watching Stewart onstage doing stand-up comedy. Stewart followed Louis C.K. in a twin killing of twin-unbilling, as neither comedy star was listed on the comedy club’s announced lineup Wednesday. “I took this guy to the @nyccomedycellar tonight and he couldn’t resist the mic,” wrote Rory Albanese, former longtime executive producer for Stewart on The Daily Show, and current showrunner for The Nightly Show with Larry Wilmore. “The Cellar is where it all began for Jon. This was an awesome moment.” Or as Stewart himself shouted after getting offstage, “I’m alive!” Stewart held court earlier Wednesday night at “the comedians’ table” in the Olive Tree Cafe above the Cellar, reminiscing about his younger days at the Cellar before he hosted any late-night TV shows, when original host/booker Bill Grundfest was in charge of the club for owner Manny Dworman. Then Louis C.K. arrived to work on new jokes, and when Stewart joined other comedians downstairs to watch (including later drop-in comedian Mike Epps!), Stewart passed by his old headshot on the staircase wall and pointed out how he young he’d been then. He seemed even more excited watching the crowd watch CK than you may be about reading this. Would Stewart like to go up next? Yes, it turned out. Very much so. Even if he just talked for 10 minutes, the prospect looked too juicy to pass up. Even if he was following CK. Perhaps because he was following CK. It’s fascinating to see and to know that a star goes through the same emotions before, during and after shaking off the proverbial rust of not having gone onstage as a stand-up in far too long. “It’s been 20 years!” Stewart exclaimed. Well, maybe not that long. Club owner Noam Dworman told The Comic’s Comic he remembers seeing Stewart drop in closer to a decade ago when he needed to test out bits before a big charity function. Nevertheless. It had been ages. “I could do this again,” Stewart said offstage afterward. We were all hoping you’d say that. Stewart’s final show as host of The Daily Show is a week from today, on Aug. 6, 2015. Comedy Central is urging fans to show their support with pictures, videos and more via the hashtag #JonVoyage. It’s encouraging to know Stewart already may have tapped back into an old outlet now that there’ll be a large opening in his booking schedule.

Love hearing stories like this when ultra famous successful people will still unexpectedly pop in at NYC comedy clubs. Stand up comedy is probably the hardest thing in the fucking world. I’ve never stood up there and done like a “look at me and laugh out loud routine.” Ive just done the live podcasts, which are infinitely easier and completely different. And even then, the moment you look at out a crowd and its just like “Ok, entertain them and DO NOT fuck up or everyone will judge and ridicule you” its terrifying.

So of course some of the most talented people in the world you see on TV cut their teeth doing that. Theres a reason they so incredible on the big or small screen and its because they cut their teeth doing the hardest thing ever. Its also the same reason they’re the type that will still pop into an 80 person comedy club because they probably remember the days of bombing and end up being pretty humble guys.

Or at least it certainly seems that way. Jon Stewart and Louis CK, hell of a duo on an unexpected random Wednesday night.

PS – If you didnt see it the other day, this is Smitty’s stand up from a few years back. Damn good. Like I said this shit is HARD and Smitty did a real good job with it