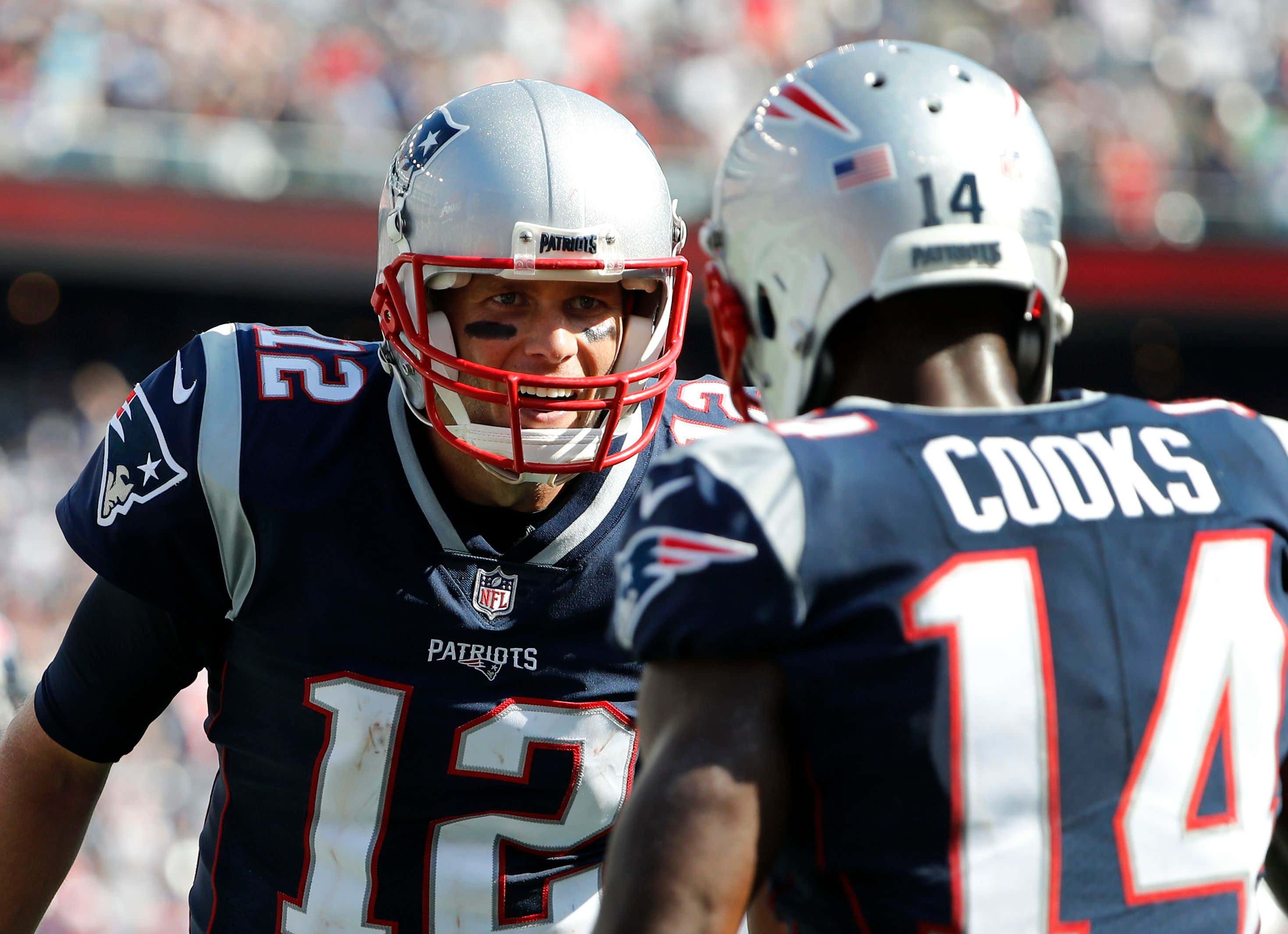 I think that now, 3 1/2 seasons after the fact, I can say without fear of contradiction, that the 2017 trade of Jimmy Garoppolo from New England to San Francisco for a 2nd round pick, is the most debated, examined and controversial trade of a backup quarterback with six quarters of NFL experience in the history of mankind.

Here we are in 2021, still talking about it. And still getting new perspective and insight into it. Today from Albert Breer in MMQB. Who offers up that the key to the whole matter is Brandin Cooks of all people.

Cooks was a one-year rental in that 2017 season. And I have to admit, always struck me as one of the strangest acquisitions of the Bradichick Epoch, as they traded a 1st rounder for him (No. 32). He produced a 1,000 yards on a Super Bowl team. He made this catch on a throw that is on the short list of a very, very long list of indescribably clutch throws from Brady:

He might have won a ring had a concussion not knocked him out of the Super Bowl against the Eagles. But then was immediately traded to the Rams for another 1st rounder (No. 23). Which seemed like an odd choice at the time. Which most Pats fans chalked up to the team not caring for his style of play and accusations he was a guy who went down on first contact and was too soft. But if Breer is right, there's much more to it than that:

Speaking of the Patriots’ rebuild, I think Belichick’s actually been forthright in saying things went sideways when Brady found a way to maintain his level of play. And my smoking gun in the whole thing is Brandin Cooks. My understanding is Cooks was initially acquired, in 2017, as a piece for Jimmy Garoppolo, not Brady—with the feeling being that the Patriots would play more of a downfield game once Garoppolo became the quarterback, presumably in 2018. And that played out. Cooks was a good player, but a bit of an awkward fit for Brady stylistically in 2017. Brady, for his part, didn’t drop off, even a little. That year, he was the NFL’s MVP. That, of course, hastened the trade of Garoppolo to San Francisco and, months later, the trade of Cooks, who simply didn’t carry the same value to the team that he would’ve had the team morphed its offense to what Garoppolo did well in 2018. Beyond that story just being an interesting one, it also shows how Brady’s play wound up bastardizing the rebuild a little. At that point, the Patriots were older, and had a bunch of heavy contracts tied to those players. With Brady proving he could still win championships, the expected rebuild got pushed back a year, then, after Brady won his sixth title in 2018, two years. Eventually, the dam did break. But the Patriots got another ring out of it, with the downside being the contract debt they built up in keeping those teams together (also, drafting well could’ve solved some of this, and the Patriots didn’t draft well). And while it was a zillion percent worth it, the Patriots did pay the price in carrying around $30 million in dead money last fall. Now, with the books clean, we get to see if Belichick can build back what he initially expected to build back two or three years ago.

There's a lot to unpack here. And I'll begin with Cooks. It's been suggested by some that Brady was pissed off at the trade in 2018 and that it was the beginning of the end of the relationship. Which is understandable, given that it happened around the time he started saying things like this:

And they ended up using the pick they got for him on LT Isaiah Wynn and their own pick on RB Sony Michel, as opposed to Cooks' replacement. Leaving Brady to carry the passing game with a PED-suspended Julian Edelman, a limited Gronk, a substance abuse-suspended Josh Gordon, Chris Hogan, Cordarelle Patterson, Phillip Dorsett and James White.

But this is saying that Cooks was more than a cause of the divorce, he was brought in to be a fit with Brady's replacement. Remodeling the house to please your second wife while you're still married to your first. Now we're left to wonder if Brady was told about it, and that's why he was still so pissed off even months after Jimmy G was in San Francisco and the future still belonged to him.

Secondly, Breer is saying what I've been saying for those 3 1/2 years. The reason Belichick did not make the transition to Garoppolo is that he couldn't. Brady made it impossible with his play. And if you value that sixth ring (so much that you want to read all about it, shameless plug), you should thank your deity that Belichick made that call when he did.

That said, trading Cooks was still a total miscalculation. It indicates the Patriots thought Brady was incapable of throwing deep. Which might explain why they spent the exact same amount of draft capital on N'Keal Harry, a more physical, possession type receiver who is currently in the on deck circle of Official Draft Bust status. But both moves were gross mistakes, given that according to Pro Football Focus, this year on passes of 20+ yards in the air Brady finished:

The Pats would've been better off keeping the Brandin Cooks they had and picking up another, rather than assuming Brady's aging arm was going all cooked spaghetti on them.

Mostly though, this is a solid, objective take on how we found ourselves in the position we've been in. The 2020 season was the bill coming due for staying in the hunt during the previous three years, if not more. And that bill was $30 million in dead money. If Harry had been DK Metcalf instead of his whole career adding up to about one month of DK Metcalf, and if the two rookie tight ends had done anything at all, it would've mitigated a lot of the awfulness. But they haven't. And here we are.

The good news is that the Pats continue to free up more money:

Which will serve them well as they look for the next Jimmy Garoppolo/Brandin Cooks hook up. Or, God willing, that same one. Because Garoppolo is not out of the realm of possibility and Cooks has never not been available. Or productive.