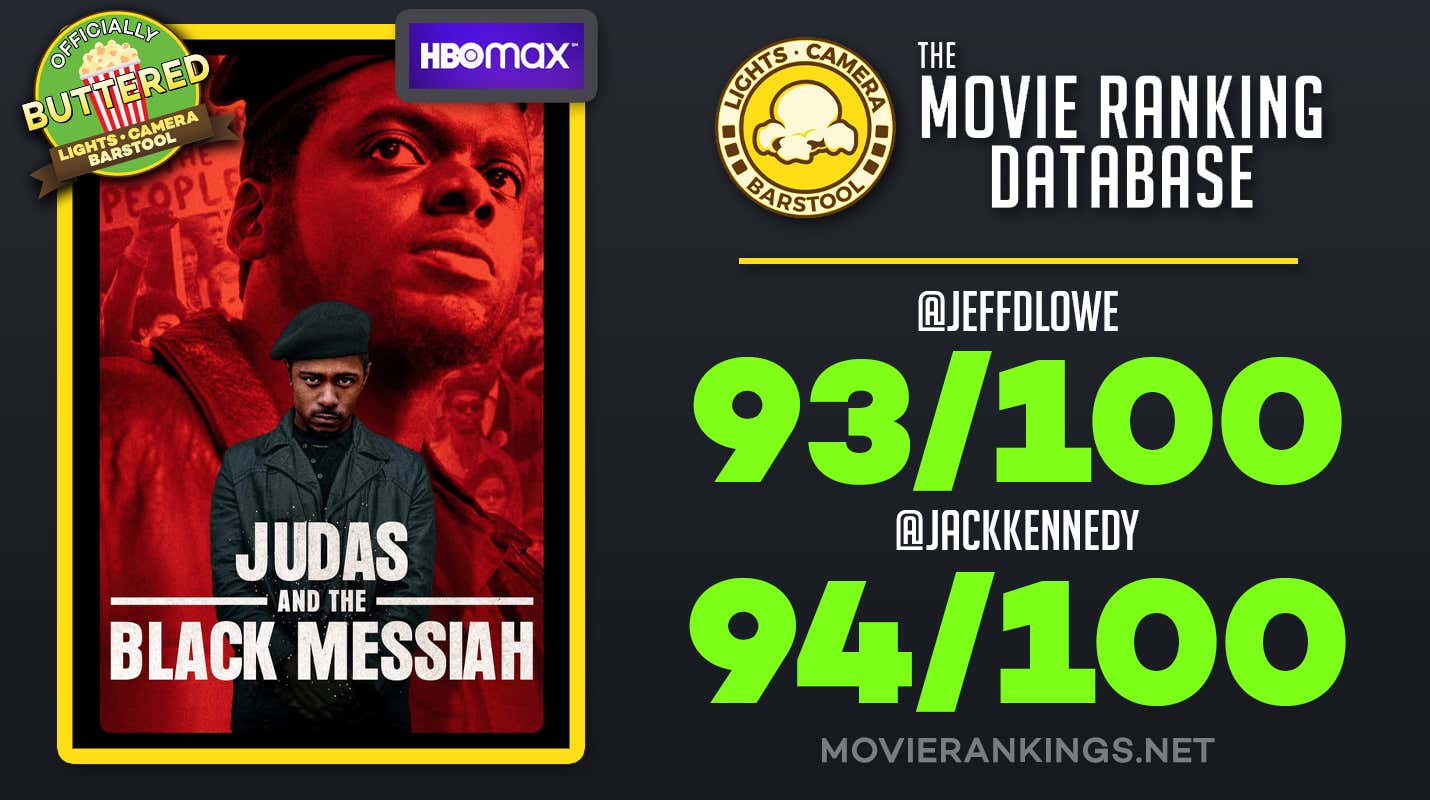 We reviewed this new movie on our latest podcast episode…

…and boy, oh boy, was it fucking excellent.

Offered a plea deal by the FBI, William O'Neal infiltrates the Illinois chapter of the Black Panther Party to gather intelligence on Chairman Fred Hampton. (via Google)

JeffDLowe (93/100): Living up to its lofty pre-release hype, 'Judas and the Black Messiah' is a home run right off the bat of incredible performances by both Daniel Kaluuya and LaKeith Stanfield. A movie that should be seen by all, we already have an early candidate for one of the best 2021 releases.

One of the more challenging things for a BioPic & True Story is presenting itself in a way that can be intriguing, and hold deep meaning, despite the fact viewers may possibly know all of the details going into it. The story of Fred Hampton is one I already knew all about, so nothing that played out in 'Judas and the Black Messiah' surprised me, but it speaks volumes that my heart was still racing as it all unfolded.

The team behind this movie, especially director Shaka King, should be commended for the way in which this story was told. With such a heavy subject matter at hand, everything is laid out to the audience with incredibly deft care. No moment or speech feels played up in a cheesy way that might undermind its significance or importance. The emotion drips off of the screen, and the tension built up through some fantastic narratives and characters (no spoilers, but what they did with Jesse Plemmons' Roy Mitchell adds a fantastic element to the movie) will have you on the edge of your seat.

It's hard to argue against the biggest reason for all of this working being the performances turned in by both Kaluuya and Stanfield. They're both excellent, and the push-pull development of Stanfield's William O'Neal is key to the emotional rollercoaster the audience is put through (Stanfield is one of the best actors in Hollywood when it comes to scenes that require him to be flustered). But we have to talk about Daniel Kaluuya above all, an actor who just simply cannot miss. His presence on-screen in this movie as Fred Hampton is simply breathtaking. Kaluuya's command during every moment, especially Hampton's speeches, is some of the best stuff I've seen in any movie over the last few years. From 'Get Out', to 'Widows', 'Queen & Slim', and more, Kaluuya is easily one of the best five actors in Hollywood right now in my eyes.

'Judas and the Black Messiah' is one heavy movie that everyone should make sure to see, not just because of the importance (and relevance) of the subject matter, but also because it's just a damn good movie.

KenJac (94/100): Going into this movie, I was afraid that there was almost no way that it could live up to the hype built around it. I’m very happy to say that it definitely meets those huge expectations and then some. Daniel Kaluuya and Lakeith Stanfield put on a fucking clinic on the acting side while director Shaka King did some incredible technical work on the directing side. Whether or not you are familiar with the story of Fred Hampton, this is a great movie that tells a comprehensive and important story.

As I mentioned, Daniel Kaluuya and Lakeith Stanfield are outrageously good in their roles as Fred Hampton and Bill O’Neal, respectively, Kaluuya, who I feel can play nearly any sort of role at this point, really immersed himself into the role of Fred Hampton and made it his own. He’s fantastic in the intimate, tense moments, and even better in the big ones. He does one speech in a church that made me feel like I was actually there. Stanfield is also fantastic in a role that is obviously layered, as he is playing someone who is acting like someone else. His paranoia, desperation, and inner battle really come through in a huge way which makes the finale that much more heartbreaking.

On the technical end, I was really impressed with director Shaka King and cinematographer Sean Bobbitt. With the former, I was not overly familiar with a ton of his work. I never watched his only other movie, ‘Newleyweeds’, and only watched some of ‘Shrill’. I think the way he was able to tell this story, as both a split biopic for Hampton and O’Neal to a lesser extent, was exceptionally well done. One aspect I really enjoyed was how he used Jesse Plemmons FBI character. Instead of using him as “the good guy in government”, like a lot of lesser movies would, he was someone who saw the corruption and evil and decided to join it. The FBI was doing some truly evil shit in that time period, and seeing them portrayed for what they were and not given some savior or redemption was hugely refreshing. Trillballins pointed out a good recent example of that in ‘The Trial of the Chicago 7’, which used JGL’s attorney for exactly that purpose.

I also want to quickly shout out cinematographer Sean Bobbit, who is a frequent collaborator with director Steve McQueen and worked on ‘The Place Beyond the Pines’, ‘12 Years a Slave’, ‘Widows’ and more because I really enjoy how he shoots movies. The small moments feel as important as the big ones, and his use of long takes is always greatly appreciated.

This is an awesome movie that deserves your time and attention. Honestly, it’s probably the biographical movie I have seen in a long time. It will shock you, break your heart, and simply make you feel.

--
The movie is Officially Buttered with relative ease! You can head to Lights Camera Barstool right here to listen to our latest episode where we interview Jay Duplass of the Duplass Brothers, draft the Best of 2000s Television, breakdown the Snyder Cut 'Justice League' trailer, and review 'Judas and the Black Messiah'.