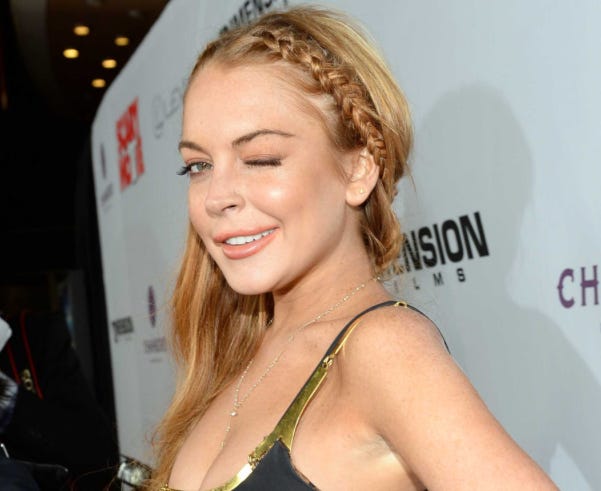 (Source) It seems that Lindsay Lohan is up to her old tricks! According to Life & Style, the European traveler, 29, sat down for dinner at Sea Satin in Mykonos, Greece— but didn’t want to pay up! “She invited about 10 guy friends to dinner…and ordered crab legs and lobster— the most expensive things on the menu,” an insider told the magazine.

The rehab alum, who has been spotted drinking again in recent months, was reportedly on her best behavior until the $1,300 check arrived. “Everyone, including Lindsay, split without paying!” the insider revealed. “She told the guys…not to worry about the bill.” The restaurant allegedly spent three days looking for Lohan, and one of her friends eventually covered the pricey tab. Possibly until now, the actress had been staying out of trouble since her relocation to London and frequent trips around Europe. She officially completed her eight-year probation stint in May following numerous run-ins with the law.

And this is exactly why Lindsay Lohan is still hot. She may not look like she used to, she may not be all that famous anymore, but what she lacks in those two departments she more than makes up for in the outlaw lifestyle. I don’t want to say these guys are morons for thinking that a lavish dinner with Lindsay Lohan wouldn’t end up as a dine and dash and the restaurant conducting a 3 day manhunt but yeah, they’re morons. When you go out to dinner with Lindsay you have to expect to tangle with the law at one point or another, that’s just how she rolls. Fuck the article itself called her a “rehab alum”. The school you went to isn’t “rehab” by accident, there are some serious hours put in to becoming a proclaimed “rehab alum”. Once a Bad Girl always a Bad Girl, and now that she’s back on the sauce, watch out. There is no stopping Lindsay Lohan once she gets rolling, except maybe bankruptcy because I can’t imagine that she has any money left and that’s probably why she’s not paying for her dinners. But other than that, there is literally no stopping Lindsay Lohan*.

*And the law, I forgot about the law, the law has stopped Lindsay quite a few times as I’m pretty sure she’s been on probation since she was 14.