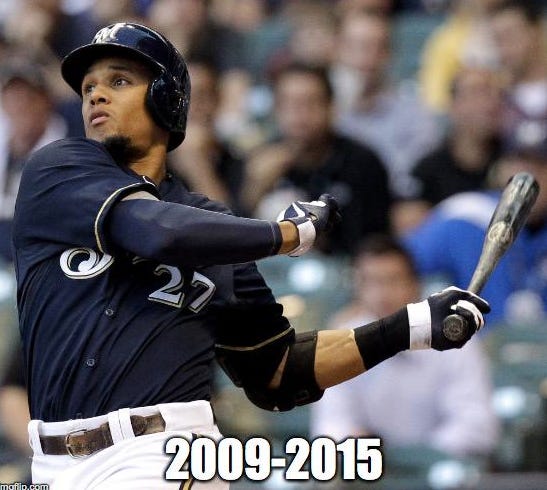 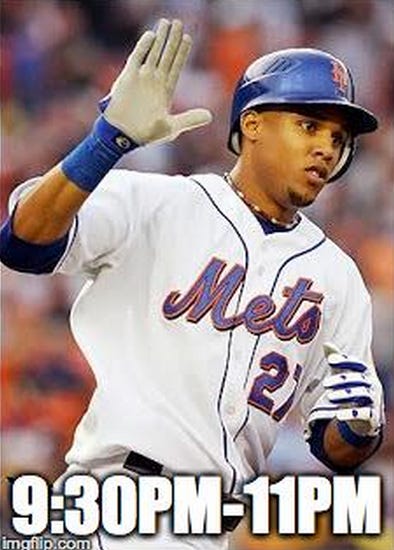 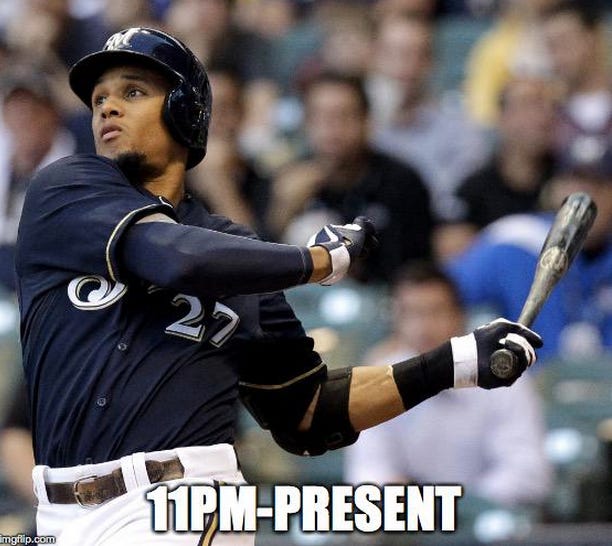 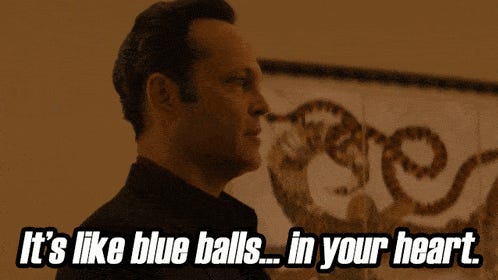 Mets life. Its like Blue Balls. In your heart. Last night a trade was reported as done, Gomez for Wheeler and Flores, pending physicals. Now usually of course pending physicals is just kind of a formality, the deal is basically sealed. But when one of the main pieces being moved is currently in the middle of Tommy John recovery, thats naturally gonna muddy the waters and things are gonna take longer than usual. After all the hoopla and all the celebrating on social media, we learn there is no trade because of a failed physical. Except the twist here is some outlets are reporting it was the Mets that said no, not the Brewers. That it was Wheeler and his TJ arm, it was Gomez and an injured hip. So now its a lot of finger pointing. A lot of the blame game. So…who were the real culprits of the Carlos Gomez/Mets trade falling through? 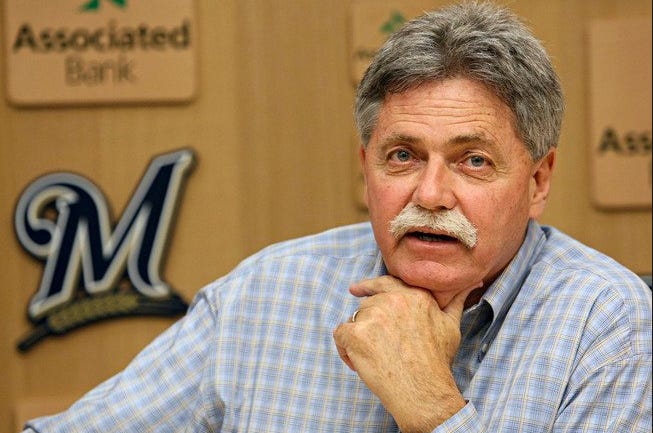 Last on this list is the Brewers. I refuse to believe they engaged in talks focused around a guy coming of TJ surgery, let a trade progress to the point that credible sources were reporting it as done and player were saying their goodbyes, and then were shocked by his physical. That doesnt make any sense. What the fuck did you expect? Its like the Brewers just googled Wheeler and where like “Holy shit! This guy had Tommy John surgery! The deal is OFF.” Now I know Wheeler’s TJ was more complicated than most. I know that you can progress well and you can progress poorly from surgery. But no way a trade reaches those lengths for a guy who everyone knows is injured and then gets called off for said guy being injured.

5. Wilmer Flores Crying on the field:

I dont know about you, but if I’m Doug Melvin and I see this guy weeping in the 8th inning I’m calling that shit off. There’s no crying in baseball! Plus you’re leaving the worst organization in the world. Unless those were tears of joy that is NOT a ball player I want on my club. On a real note – I know its an emotional time, I know in the moment the Mets seemed like assholes for leaving him in even though there was no trade (Even if there was no trade, it seemed like there was and in a blow out game if he’s that over emotional he needs to be sat down regardless) I know it can all be upsetting. But people were acting like the kid’s family was slaughtered. Lets all relax. Not like hes never gonna play again. He would still have gone on to play a game and make a zillion dollars. The dramatics were crazy. You woulda thought he was a dead lion. 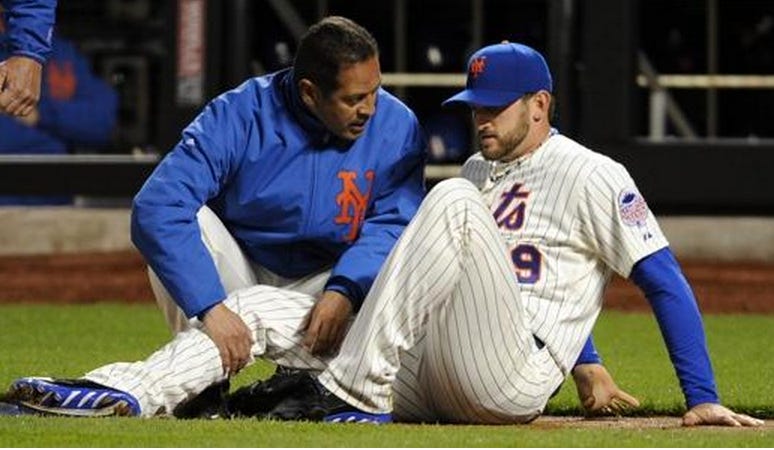 The Mets medical team and Ray Ramirez might be the most incompetent training staff in all of sports. There is no way they are equipped to navigate a trade like this. There’s a part of my brain that says it makes perfect sense that Gomez’s hip is in bad shape. His 2015 season is WAY down from his 2013 and 2014 production. He had been injured this year and I just chalked up his down season to being banged up and having a general bad year, but with him under contract for 2016 it wasnt something too concerning. A bounce back when healthy seemed likely and even his injured 2015 production was an upgrade. BUT, it makes sense that something is really wrong with his hip.

But the other part of my brain, and my heart, and my plums, knows the Mets probably fucked this up. Show Ray Ramirez an MRI of Carlos Gomez’s hip and he’s like “Whoa this guy’s elbow is FUCKED! Call this trade off!” There were some tweets flying around that the Mets sent the Brewers an MRI of Wheeler’s LEFT arm, not his injured TJ arm, and thats what nixed the deal. Although unsubstantiated and probably untrue, its entirely possible and fucking hilarious if they did. Bottom line is the Mets medical staff does NOT get the benefit of the doubt here so fuck them, they probably screwed us. 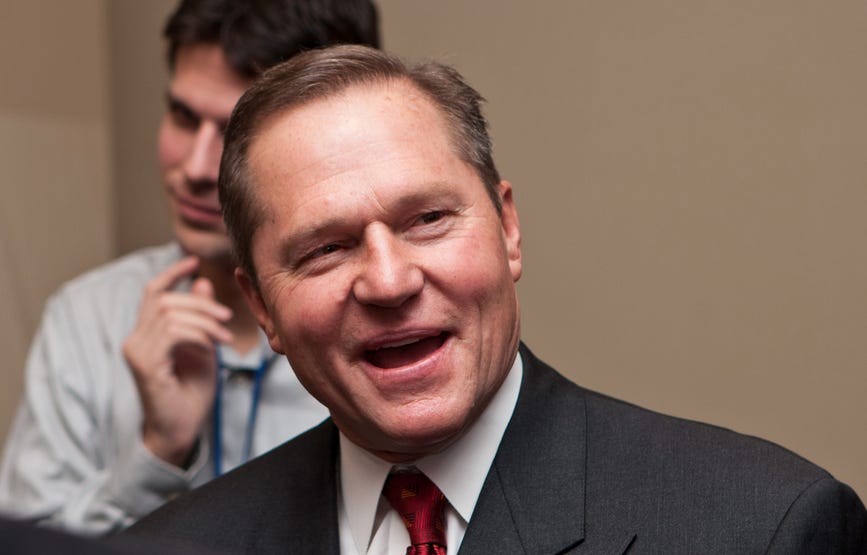 You think Scott Boras wants any of his clients going to the New York fucking Mets? You think he wants to deal with the nickel and diming Wilpons? For sure not. Dont know how, but some how, some way, Boras got his paws in on this and made it all fall apart. In all seriousness, the accusation that Gomez hip is injured – injured to the point of vetoing a GREAT trade – doesnt hold water for me when hes a guy who belongs to the Super Agent. This quote:

“There is nothing at issue with Carlos Gomez’s health,” Boras said. “He is playing every day. That is proof of his health. He is fine.

“He will be in the lineup of the Milwaukee Brewers tomorrow. That is the evidence that you can have that [Gomez is healthy].”

Says it all. Boras is like “These guys  could be worth hundreds of millions of dollars, you think I’m gonna let them play severely injured??? Get the fuck out of here!” Thats why my final stance on this deal is – no matter what may have been seen in Carlos Gomez’s hip, if hes good to go for the Brewers he should be good to go for the Mets. Especially when they traded an injured dude and a utlility infielder for him 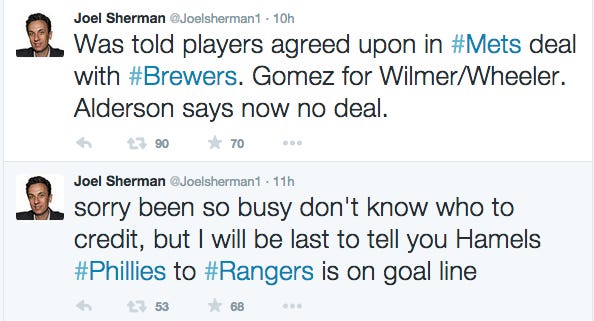 I believe Joel Sherman was credited with first breaking the news that a deal was agreed upon. This little back to back string of texts tells you everything you need to know about social media and beat writers these days. Obsessed with getting there first. Obsessed with the credit. Obsessed with the followers. No time to think, just firing off tweets. Its not just Joel Sherman, there was a ton of guys in the mix. Ken Rosenthal reporting the Brewers said no, USA Today reporting the Mets said no. Its a clusterfuck with no accountability and we’re just sitting there as fans believing everything we read. Happens in sports, happens during violent tragedies like the terror attacks and school shootings, happens all the time. And theres no repercussions. Its like weathermen guessing the weather. Now, in all these guys defense, they all reported that the deal was pending physicals and it was the physicals that fucked this up. So technically they didnt get it “wrong.” But reporting these things as “done” when they clearly were far enough apart on physicals that it never happened is fucked up. But whats more likely? That all these credible sources were completely duped and wrong and jumped the gun on the ONE trade that falls through because of physicals? Or maybe, just maybe there’s something more at work… 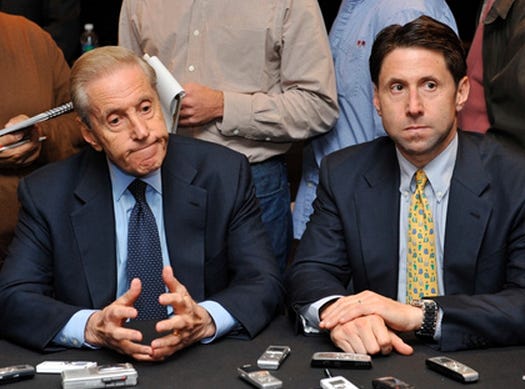 This is the Wilpons DREAM. They usually float rumors that they are “in” on free agents or “fielding offers” for trades just to placate the fan base even though they have NO plan of ever pulling the trigger. But this. This is next level blue balling. Pulling off a heist and then nixing it because of phony, fabricated hip injuries. Can tell the fans they tried. Hell, they had a deal in place! But they cant make a move for an injured guy! I know they were the causes and anyone who doesnt think so is a buffoon. These motherfuckers are the root of all evil and this is their latest scheme yet. Get all the credit for making a big move without having to bring in the big Boras client. Keep all those young cheap players under the control of your Jew Spell. I see right through you assholes.