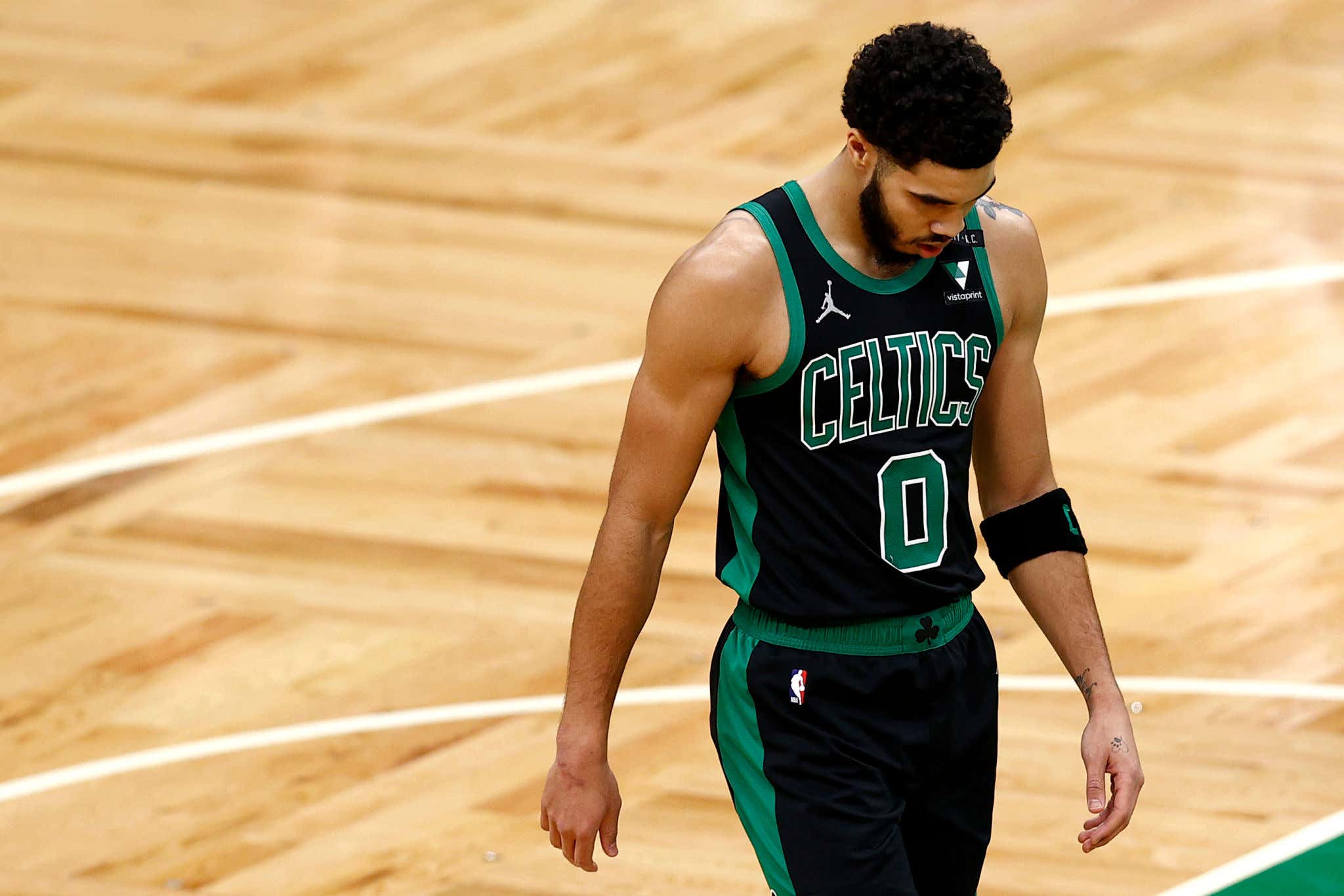 In most cases, losing to a 6-19 team at home while your two best players were active would be so embarrassing it would bring shame upon your family. Luckily, losing to the Pistons is basically confirmation that you're a contender. How does that make any sense? Well it doesn't, but at the same time it does. They only beat the best of the best. So could you make the case it's actually an honor to lose to the Pistons, and the fact that the Celts have lost twice actually double confirms their contender status?

Yeah, I didn't believe a word of what I just wrote either. But I had to give it the good old college try.

Here the Celts were, riding some momentum after a nice win over the red hot Raptors, finally get some games in their own building after 15 road games, and instead of building on that momentum and taking some steps forward. we continue to see this team take one step forward and two steps back. I'm not really going to put any stock into the B2B excuse because guess what, the Pistons were also on a B2B. They played Thursday night just like the Celts did and only one team came to play Friday night. It is a little weird how the Pistons appear to be this devastating matchup. The Celts are tied with the Sixers and Bucks with 4 losses against teams under .500 (BKN has 11), and two of them have come against this team.

We know this team is capable, we've seen them do it. But what we haven't seen them be is consistent. Now on some level that makes sense, their lineups have been anything but consistent due to covid and injuries and all that shit. But at the same time you don't need your best players available to show consistent effort.

The only consistent thing about this team is that this blog is going to exist whether they beat the best team in the league or once again can't pull out a win against a team with the worst record in the NBA. Let's begin.

- It's not often we see the Jays go for 60 points and this team lose. In fact, I bet you can count those losses on one hand. From an offensive production standpoint, they delivered. Tatum carried the load with 33/11/7 and actually got to the line 13 times which was nice to see.

He had 20 of his 33 in the second half including 15 points on 4-7 in the fourth quarter when the Celts were trying to claw their way back into it. Down the stretch, Tatum was there. While he wasn't perfect, there isn't a ton to complain about when it comes to Tatum's night.

Even on the defensive end, he was fine. He matched up with Josh Jackson (13 possessions) and Jerami Grant (11 possessions) for most of the night and they had a combined 2 points. Tatum gave them enough to win.

- The same is true of Jaylen. His 27/6 came on a more efficient 11-21 shooting and he too did a decent job getting to the line with 7 FTA. Probably should have been more given how aggressive he was in terms of attacking the rim.

Same story on the defensive end. Jaylen guarded Wayne Ellington (13 possessions) and Josh Jackson (10 possessions) and allowed 2 points. Where he struggled a little bit was with Saddiq Bey (8 points on 7 possessions), but a lot of that was because of his rotations. Not because Bey was lighting him up one on one or anything.

The points is, your two best players played well enough to put the team in a position to win. This game was mostly a case of them not getting much help.

- Semi did look great to start this game getting off to a 9 point start on 3-5 shooting. He's feeling it right now. But of course, he had to injure his knee on a drive to the rim and only played 23 minutes. Because of course if a guy on this team is playing well, he has to get hurt.

- That's it. That's all you're getting in this section. I didn't even want to write it to be honest.

- Let's tell the truth for a second. Last night was a prime example of the bill coming due on Semi's performance against the Raptors, and it came in the form of Saddiq Bey once again tearing this team a new asshole. I can't even be mad that he had a career high 30 points off the bench and set an NBA rookie record by going 7-7 from three. This is how Raptors fans must have felt the other night. Not only that, but he's killed the Celtics in all three games this year so it's not exactly "random". Did you know he's 14-18 from three against the Celts this year? He has only 45 3PM on the year and 31% of them have come against this team.

if that's what happens when this team puts a huge emphasis on something, that's not great! Mostly because nobody did a goddamn thing! Oh, and obviously the salt on the wound here is the fact that this team could have drafted Bey, but they took a different shooter who can't even get on the floor. Also not great! That's not totally fair since we all know Bey probably wouldn't play if he was on the Celts because that's what happens to rookie wings for some reason, but still…..that's annoying.

- One thing that really annoyed me yesterday was after Pritchard's great performance against the Raptors, there was a whole lot of this floating around Twitter and Boston sports radio

I cannot stand this shit. No, we can't just enjoy a good performance from a promising rookie, there always has to be shit like this. Well, in his first career start Pritchard went 1-5, scored 2 points and was basically a non factor. I blame polls like that. I also think that maybe when guards are out, the answer is not spot starting Pritchard. Let him thrive in his role as a backup point guard. There's no shame in that. Start Carsen, go a little bigger and start Grant and have Tatum play point forward. I get why Brad tried it but it did not work in the slightest.

- Not the best showing for Daniel Theis who has been pretty rock solid for the last few weeks. When this team desperately needed someone outside the Jays to show up and be efficient, his 4-12 (0-4) didn't help.I also didn't love this shot right here

It's tough because Theis has been nails from three basically all year, shooting at 46%. But given the situation, the fact that Tatum had been playing well in the fourth, I didn't love that shot. It certainly didn't help that Bey went right down and made the game sealing three right after this. Truly a make or miss league. I understand that most of us don't like that shot because of the result, it technically was wide open from a spot Theis normally hits, but he hadn't made that shot all night and that was a huge moment.

- I'm also not ruling out that we could be seeing Tristan Thompson come back down to earth a little bit after he was so good on the West Coast trip. His last two games have been pretty "meh", and considering there was no Rob last night his minutes were important last night. A total of 4 points and 2 rebounds on 2-5 shooting isn't exactly what I was hoping for.

- Like so many losses this season, shit came down to a terrible third quarter. Tough to win when you come out and do shit like this after the break 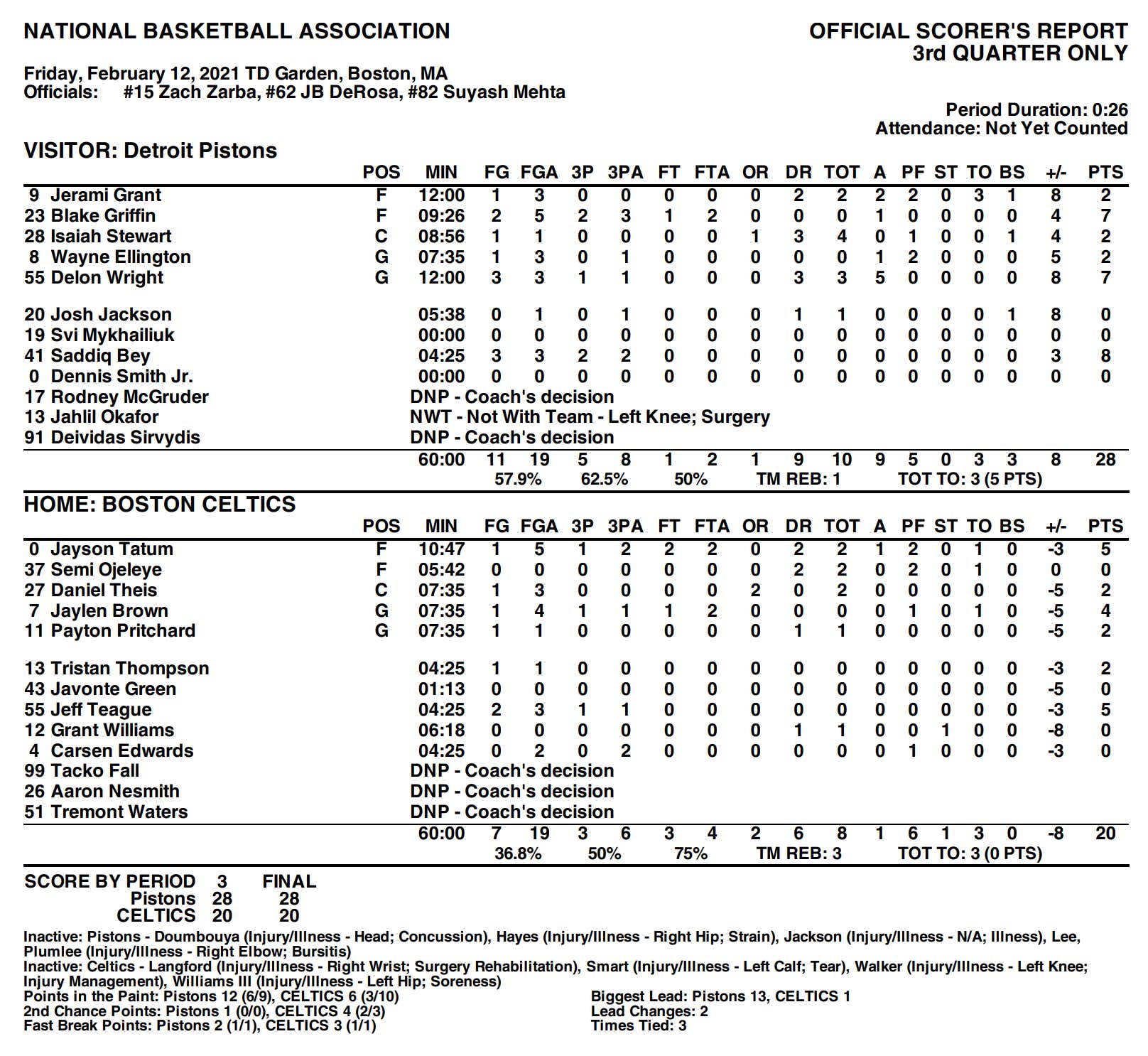 that is just so bad, on both ends. No defense whatsoever combined with an abilitity to actually score, and this is where the game was lost. I mean, Saddiq Bey nearly outscored the entire Celts starting five by himself. That's a problem.

- Part of what is supposed to make Grant playable is his defensive versatility and his ability to guard the perimeter. That most certainly did not happen last night. Guy got carved up repeatedly. I feel like we're seeing guys either score at will against Grant when he's in space, or he fouls. That's it.

- People might think I'm crazy, but this game was a prime example about why I'm so adamant about backup point guard needing to be addressed at the deadline. We can't have a situation where our options are Jeff Teague and a rookie. We just can't. Yes I know Kemba is out and Smart is out, but Kemba is going to be on load management all season and who knows when Smart will beback and how much of a load he'll carry.

It's no surprise that when Teague came in he immediately turned it over and the momentum changed. He could guard anyone, and for some reason, we only saw 4 minutes from Carsen in this game. I don't get it. This game was lost due to the second unit's inability to do anything that even came close to playing decent basketball.

Here's the thing though. Everyone has to be patient. There's no point in screaming for Ainge to do something right now because it's still WAY too early for other teams to be sellers. The deadline is still 5 weeks away. Nobody is going to trade since there are so many teams that aren't in sell mode just yet. That will come over the next 5 weeks. Even if Ainge wanted to make a trade tomorrow, there has to be a trade partner, and right now that team doesn't exist. It will,  it just won't happen until the end of March most likely.

- But there's no denying that something needs to be done. It doesn't even have to be a monster move either. Use the Kanter TPE and trade other pieces for bench help. That alone would make a difference. Even if you don't want to use the Hayward TPE right now, you can still find ways to add and improve this bench and we've had a large enough sample to see that things have to be upgraded. Especially with guys being on load management.

- Missing 8 FTs including 3 in the fourth quarter when things were close pretty much sums up how this game went. When this team plays like shit, it infects everything they do.

- Numerous times in the fourth quarter the Celts had the lead down to 5 and all they needed were some defensive stops to flip the momentum. Instead, they fouled. It is a little concerning that when they need stops, this team cannot defend without fouling. That's been a problem all season if we're being honest. I can't really remember that being as much of an issue as it appears to be this season. The elite teams in this league defend without fouling. The Celts rank 23rd in the NBA in fouls (that's bad), and are 28th in fourth quarter fouls (that's even worse).

You look at the fact that 6 of their 12 losses have come by 6 points or less, and a lot of that has to do with the fact that they cannot get stops in close games. They foul.

The good news is MIL also lost last night and BKN has to deal with Steph Curry tonight, so big picture the Celts are still in OK shape in terms of seeding. They are still right there, but they need to get their shit together. They need to find ways to avoid performances like this, no matter who is active or not. They keep blowing prime opportunities to gain ground because they can't stop being inconsistent, and that my friends is annoying as fuck.