No, no I didn't. Last night Dallas and I had another installment of #LetsGetRipped on the Starting 9 instagram. Just some guys talking baseball and opening cards. We got our hands on the new Topps 2021 Series 1 that came out this week, super excited to open these. We were guaranteed at least 1 auto and 2 relics (jersey, hat patches, those types of things) in a box and they're hot in the street so we decided to break these bad boys open. Obviously the big guys in the set are any of the big rookies this season, and some old reliable guys like Mike Trout and Ronald Acuna Jr, you may have heard of them.

I'm flipping through one of my packs and tossed aside a cool looking Max Scherzer card. Immediately my heart stopped. I got a lump in my throat, I thought I had just landed my white whale. I thought my daughters college tuition was all paid for. I thought I could buy as many Slim Jims as I wanted. I was going to be a rich, rich man.

My eyes immediately went to the 1/1 in the corner, then I saw the autograph, then I saw the patch, then I saw the Mike Trout face. For that split second I was on top of the world. Then I remembered that Topps is doing this INSANE thing where they replicate older autograph cards. IT'S A PICTURE OF A CARD! Just a reprint! I mean what the hell is that? Dallas almost lost it too! This would have been a huge hit, instead it's literally worth pennies. Crushed. I was just crushed. Cruel and unusual punishment is what that was. You can actually hear the second my soul leaves my body. I mean at first glance this 100% looks like the real thing, just look. 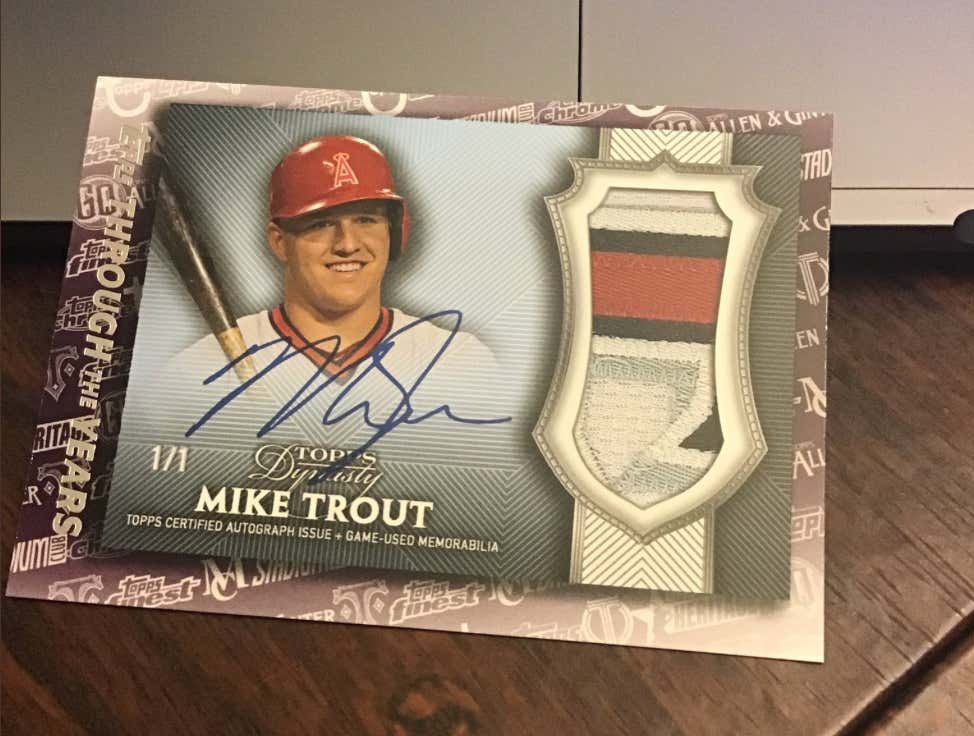 We kept ripping throughput the night and got some great cards out of these new Topps boxes. Highly recommend picking some up if you can find them. Good cards to get you back into the hobby. Dallas had ripped a Cal Ripken Jr. signed card from Topps Chrome Black a few days earlier and decided to throw it right in my face while I was going through my cards. Was in front of me for almost 2 minutes before I looked up. Whole chat was going crazy trying to get my attention, but I was knee deep in cards so I was in the zone. Awfully nice of him to flaunt that one for me.

Dallas had some other really nice pulls out of the Topps Chrome Black, a sick Ronald Acuna Jr card in the throwback unis.

A pretty cool JD Martinez card that I'm sure Jared would pay top dollar for.

And the best was this 1/1 Mark McGwire signed card. Only 1 made and Dallas got it. He talked about how he loved Big Mac growing up and now has one of the rarest cards of his. Pretty awesome how that turned out, especially him being in the Athletics uni.

Last night's rip was great, had a lot of time chatting it up with people in the chat. This is a hobby that is exploding, it's only going to get bigger. This kind of stuff is what makes the hobby great, people shooting the shit about the different cards, making trades with others, thinking you pulled a monster card, it's all great. Lots of money to be made in this hobby too. Give it a rewatch if you want, or feel free to jump in the chat next Friday when we open some more cards! Hopefully next time I won't get blue balls from a card.