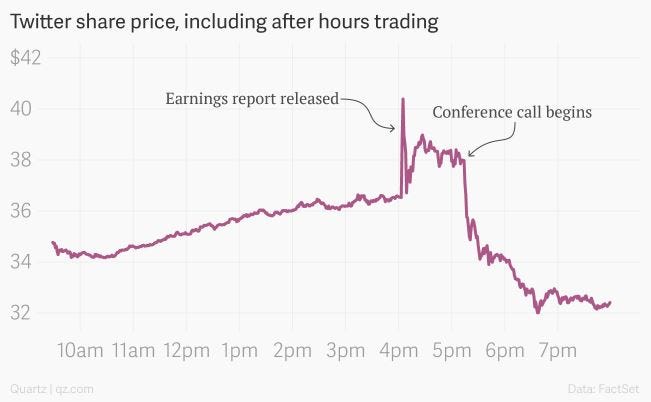 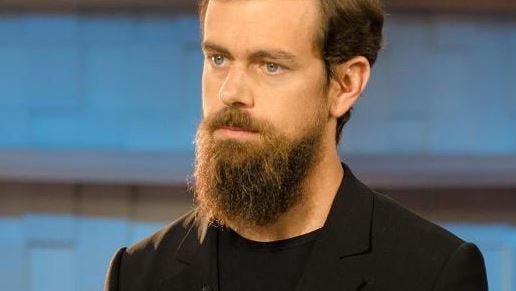 Can I get a freaking CEO who is not in a Grunge band?

Qz.com - Twitter’s change in top management—ex-CEO Dick Costolo stepped down in June—was meant in part to give the shares a lift. But the installment of Twitter-cofounder Jack Dorsey as interim CEO has been less than salubrious for the stock, which is down roughly 12% from where it was when Costolo left the corner office. After Twitter revealed its second-quarter numbers following the close of the regular trading session yesterday (July 28), there was an immediate spike in the company’s share price. News of the slightly-better-than-expected results sent the stock up more than 10% in after-hours trading. Then the conference call began.

What was said? For starters, there was Dorsey’s reminder that the road ahead for Twitter is both steep and long. “We’ll take the necessary time to build the service people love to use every single day, and we realize it will take some time to show results we all want to see,” Dorsey said in his opening comments to investors. The share price trended steadily lower as the call continued. At its worst moments, it was down roughly 13% from the day’s closing price.

Not all of the comments that spooked investors came directly from Dorsey. Speaking about the closely watched metric of monthly active users (MAUs), CFO Anthony Noto had this to say on the call: “We do not expect to see sustained, meaningful growth in MAUs until we start to reach the mass market. We expect that will take a considerable period of time.”

These fucking idiots.   SHUT YOUR GOD DAMN MOUTH!    How fucking hard is that?  I mean Jesus Fucking Christ.   Nobody wants to hear about how user growth is slow and it’s gonna take a considerable amount of time to grow.   You keep that shit in the fucking locker room.  You don’t go blabbing about it to the media on a god damn conference call.   I mean holy shit what the fuck are we doing around here?  You beat earnings.  The stock was flying.  Then you open your fat mouth and next thing you know I’m stuck vacationing on the Vineyard like a welfare case.   Seriously who the fuck tells the world that growth is gonna suck forever?  What type of message is that?  What type of leadership is that?   Tell me it’s sunny when it’s fucking raining outside. That’s Wall Street.   Nobody tells the truth.   God dammit Twitter wake up for me one time.

PS – The joke is gonna be on twitter because the lower they go the more stock I buy.  I just keep doubling down.  I’m gonna own the whole god damn company soon and fire everybody.