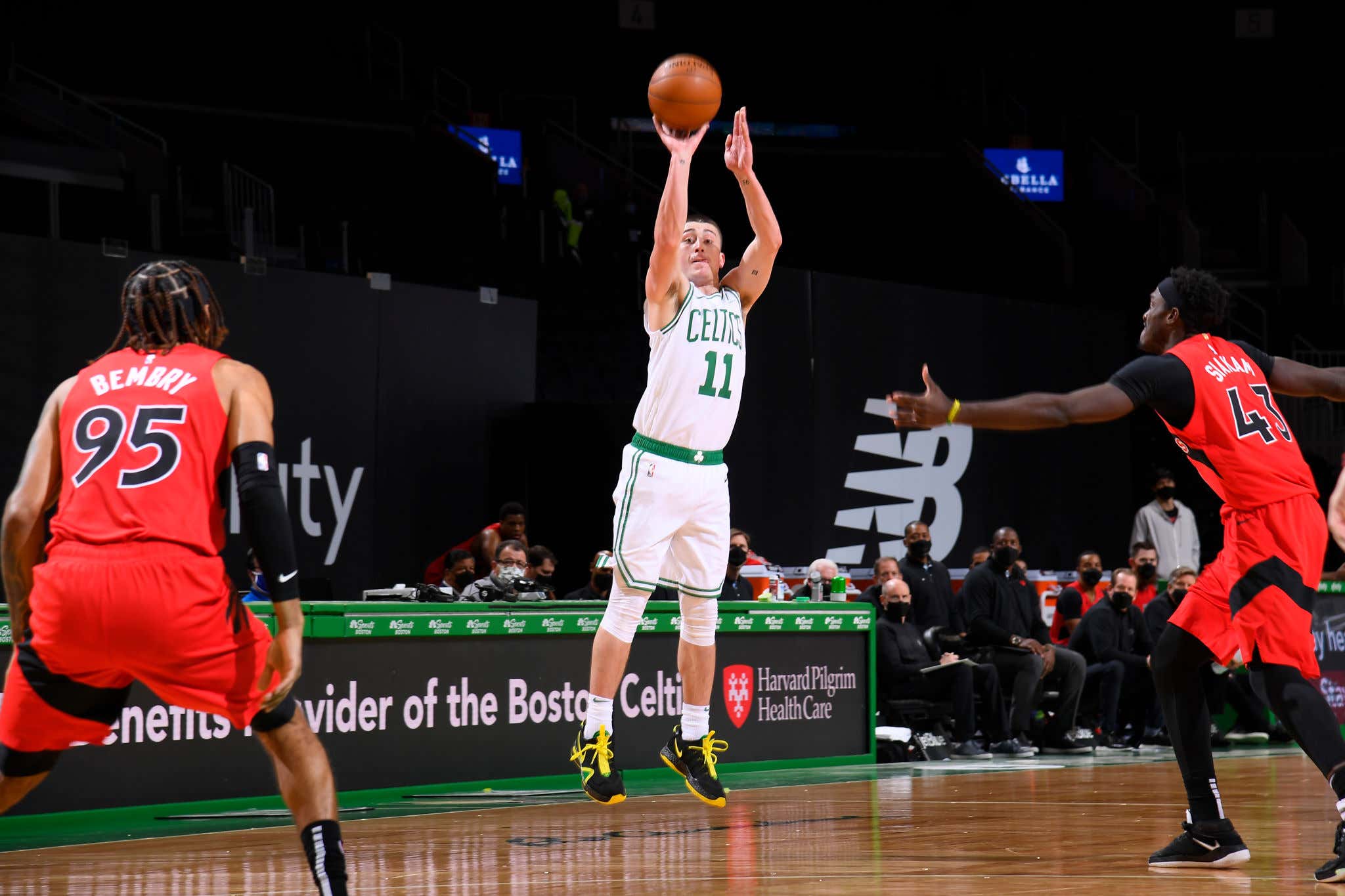 Normally when you finally come home from a 5 game West Coast trip, you have a few days off to recharge. This year, with all these postponed games, that's just not an option. For example, last night was supposed to be an off night for the Celts, but instead they had to change things up a bit and play in an effort to make up games (they also play tonight). Not only that, but they were facing a red hot Raptors team. A group that had won 5 of their last 6 and had a total of 5 straight games scoring at least 120 points. Not exactly a cupcake game by any means. Despite starting the year at 2-8, the Raptors have started to turn a corner and currently sit in the 6 seed. Any time these two teams play, it's always a battle that historically has taken years off our lives. I'm pretty sure we were all relying on needing huge efforts from the Jays and then Kemba to not be completely terrible in order to beat a team like this.

Then things got really, really weird.

Sometimes you watch a team get a prayer performance from a random player on their roster and it completely changes the game. That shit is so infuriating. I know this because 9 times out of 10 we are witnessing it happen against the Celts. Sort of like Joe Ingles scoring 24 points, making like 5 3PM and taking a career high 10 FTA. That makes your blood boil because you know chances are a performance like that won't happen again all season. Well, that's basically what happened last night. We finally got to experience what that feeling is like when it happens for your team. I can fully admit that what we saw yesterday was random as fuck. As a Raptors fan it would piss me off big time.

Not sure what I'm talking about? Allow me to explain.

- By all accounts, Semi Ojeyele is having a career year. He has his highest FG% of his career (42.6%), the highest 3P% of his career (38.2%), the most rebounds (3.0), assists (0.8) and points (5.6). Those numbers don't blow your dick off, but it helps paint the picture. Semi has been the best he's ever looked as a Celtic this season. Even knowing that though, I have no explanation for what he did last night

24 points on 8-12 shooting (6-8) in 30 minutes? Game of his life. His previous career high was 22, but last night this was a man that looked possessed. I've never seen him consistently shoot like this in any game I've ever watched from Semi. We've seen him get hot to start games, but it usually tails off. That did not happen last night. You want to talk about prayer performances, you're looking at maybe the biggest prayer and most random explosion of offense any player this season. Nobody, not even Semi himself, saw a night like last night coming. How could you? He had been shooting like 28/18% so far in February.

But it was a performance this team desperately needed. A quick 8 points to start this game off, I liked how everyone realized Semi was on one in this game and then made a real effort to get him the ball in positions where he can succeed. Around the basket and in the corners. The corner three is the one thing Semi has been nails with all season, and I'm at the point now where I am getting mad when he DOESN'T take it. What a wild journey that is.

- Then there was Payton Pritchard. Interesting we're not hearing too much from the "Ainge can't draft" crowd these days. Is that maybe because he absolutely fucking nailed this pick? Payton Pritchard had not only come into the league with a greener light than Steph Curry, he's basically a 50/40/90 guy from the jump. Oh, and he can do things like this

Now what I'm not going to do is call his performance a fluke. Why? Well let's not forget, he also had 23/8 on 61/50% shooting against the Raptors in their first meeting. Since his return to the lineup from his MCL sprain, Pritchard is putting up 10/3/1 on 52/54% splits with 3.3 3PM a night. That's pretty fucking solid for a rookie backup point guard.

I don't want to sound dramatic, but when I watch FastPP shoot the ball I have the same confidence that it's going to drop like I did watching Ray Allen take threes for this team. I know, that makes no goddamn sense but at the same time it makes all the sense in the world. He's automatic. Corner threes, logo threes, above the break threes, doesn't matter.

But what if I told you his shooting isn't what I love most about him? For me, it's the defense. This is a prime example of what I'm talking about

He's been an NBA quality defender since the day he stepped on the floor. He gets in that ass. I love him. The kid can play and there's really no denying it at this point. The best part is even without Smart, if he's going to play like this it means there are no Teague minutes which might not be a bad thing.

- Crazy what can happen when you move the ball. I can't remember the last time we saw the Celts have this type of ball movement in a game. A total of 30 assists on 39 FGM? Boy was that refreshing. As we saw, the Basketball Gods reward that shit, seeing as how the Celts made 20 3PM. I'm not sure why this team can suddenly shoot 3s much better than 2s but I won't question it.

A huge part of that 30 assists is because we saw the Jays take on a different role. They were playmakers. Not often you see them combine for 29 points and the Celts win, but that's because they had 19 assists. Even though Jaylen got a little lazy as a passer at times, their playmaking was a huge factor in this win and things that we probably don't see them do earlier in their careers. They made an impact without scoring, which certainly brings joy to my life. If defenses are going to focus so much attention on both when they drive, then they need to be able to reads defenses on the fly and find shooters. That's exactly what they did yesterday.

- Mark it down. February 11th, 2021. The Celtics didn't piss away a winnable game in the fourth quarter. I cried tears of joy once that final buzzer went off. I'm only kind of kidding.

- We need to see it for a little while longer, but admit it. That looked like the same old good Kemba we know and love. A solid 5-8 from deep including some huge makes in the fourth quarter, it was nice to see Kemba make shots. Hopefully, he can build off this performance and truly snap out of his slump. I doubt he plays tonight in the B2B (which is fine), but this was a nice reminder that maybe it's silly to give up on him 10 games into his season. He has to now back it up which is still a question, but I feel much better after watching him last night. The movement is there, now it's all about regaining his confidence as a shooter and a night like last night can only help.

- You make sense of this

- Much better night from Brad too. His rotations were better, he nipped any potential Raptors run in the butt and didn't let the lead get too low. People love to talk about how Nick Nurse outcoached Stevens in the playoffs despite ya know…losing the series, so it was nice to see Brad not fuck shit up in a game they really had to win.

- The Celts never trailed, and this game was never tied. A wire to wire win. If anything this game was more a relief given what we saw at the end of the West Coast trip, and I don't think it's crazy that everyone from the team to the fans needed a complete four quarter win like this. Now we know they can actually do it!

- Nobody is really talking about it, but Jayson Tatum is in a Kemba-Lite shooting slump right now. That's just a fact. At least by his standards. He's only shooting 40/36% this month and has now had three straight games under 40% from the floor. The point totals are there (25.2), but his efficiency has been a bit of an issue as soon as we got to February. The crazy thing is his issues are mostly 2pt FGs. He's only shooting 55% at the rim, 36% in the paint, and 38% from midrange. Those are way lower than where he usually lives. Certainly no reason to panic, but we can't exactly call it good either.

- Given how good he's been I'm willing to overlook Jaylen's 3-14 (0-4) as just an off night and not a sign that his knee is fucking his shit up. Let's just acknowledge that he struggled shooting last night as well and move on.

- It does seem that whenever this team plays Kyle Lowry they can never really defend him. Especially without Smart. He's too big for any other guard on the roster. That ass will bring you pain. He finished 10-15.

- 18 TOs as you know, is way too many. Not great when 10 of those come from your starting backcourt either. It didn't bite them in the ass in this game, but it will moving forward. Have to be better with the ball.

- Quick question. I'm not a TV producer, but what the hell is the obsession with going to weird sideline camera angles during games? We've seen ESPN do it, TNT do it, and we had it last night on the Celts broadcast.

I wait all goddamn day to watch this team play, so when they are on TV, I want to be able to actually see the game. The camera angle sucks dick, so why does it keep happening? Nobody is going to complain if you just keep it overhead and show the product. That's why we are all watching!

- What even was this sequence

- The best part of that third quarter was the fact that the Celts had 86 points with 5:53 left in the quarter and ended the frame with 88 points. That's so impressively bad I don't even know what to say. Who else goes half a quarter without scoring more than your Boston Celtics? Nobody that's who.

At the end of the day, this win was a giant exhale from everyone involved. They responded to a weird schedule change as best you could. Now the giant slaying Detroit Pistons come to town so don't thinkt that'll be a layup either, especially with no Kemba. This team has a lot of work to do still in order to get to where they need to be, but the reality is despite their tough start and guys being out they sit just 0.5 games from the 3 seed and trail the 1 seed Sixers by 3 in the loss column. They are very much not a disaster unlike what Twitter will tell you. They just need to play better, and last night was a good step in that direction.