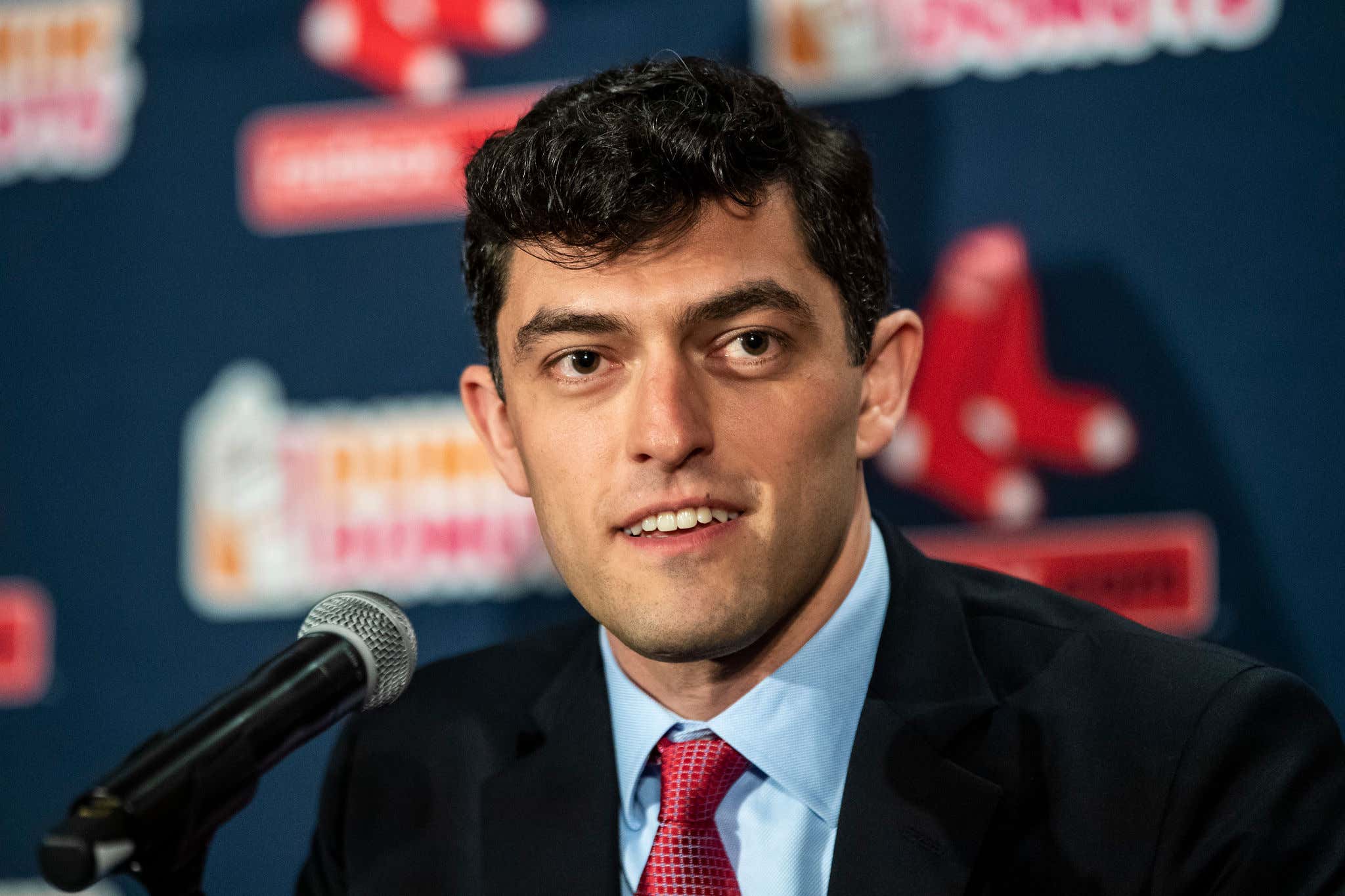 I feel for Chaim Bloom here. I really do.

You get your dream job, and your first order of business is having to trade not just the most popular player on the team, but arguably the most talented player in franchise history because the guy before you made a handful of misguided financial decisions. Of course you take the job, because who wouldn't? But the task at hand was not an easy one by any stretch of the imagination, yet it had to be done. Then you conduct a managerial search that a lot of people painted as a farce, that the powers that be above Bloom wanted Alex Cora so the hire became Alex Cora. I think that's bullshit, if you're curious how I feel about it. I think the final say came down to who Bloom truly wanted, and Cora was the obvious choice. We talked to Bloom about that, too, on the new Section 10.

But to have your follow up act a year after trading Mookie Betts be trading Andrew Benintendi, that can't be easy, either. If there's anything that we know for certain about Bloom, it's that he has taken a Bill Belichick approach in that he does not care who your favorite players are. If there's a move that he thinks he can make that will help build a championship core in the future, he will make it. The man would trade his own mother if it resulted in a championship. So, from that perspective, I can respect it. It doesn't have to sit well with me or make me happy when it happens, but I wholeheartedly trust the vision.

The first question out of the shoot was, "So, you traded Mookie Betts. Why did you do that?" He didn't shy away from the question.

9:28 “He is really good and I’m told he is an even better person. We did trade Mookie Betts, yes. Long and short of it? I thought when I came here we were in a position where we had a good team, but not as good a team as we needed to have and the further out you look, comparing us to the teams we gotta beat. Given where the system was at, given the sustainability of our roster compared to the systems that those teams have, how young, how controllable their players are, the further out you look the further behind we were set to fall if we just kept on the present course. Now there’s a reason for that. There was this all-in push that worked. These guys won the World Series not that long ago, but a lot of that was done just by taking a ton of future value and pulling it into the present. Again, it worked so I got no beef with that, but on the other side of it you end up with this situation where, at the end of the day, you have to take care of tomorrow if you don’t want tomorrow to suck." On his decision to trade Mookie Betts

11:02 “Fact of the matter is if we would have kept Mookie he would have been watching the World Series from his couch just like how I was watching it from mine. That’s just where we are right now. So you want to be ready to maximize that prime, this organization did for a lot of his prime. So there’s no shame in that. He won a title here and that’s great, but just looking out ahead, without a constant flow of young talent? No team, it doesn’t matter what your payroll is, you need to keep that talent pipeline full and if we don’t have that you can’t build around a player like that… in the long run, it’s probably emotionally, like the hardest decision I was a part of. But strictly looking at the baseball part of it, I thought this was hard, but in the long run I think we’re gonna be better off just with the talent, the runway we have with that talent and what else we can do with the resources that this organization has.” On his reasoning for the Mookie trade

I took what he said in his response about the Mookie Betts trade and boiled it down to something simpler for fans to consume. You have the idiot fans out there who are calling the Red Sox the Boston Rays. That's not the case. The Red Sox will not look to build a championship contender with a payroll that's hovering around $40 million. What they will be doing is taking a Rays-like approach to acquiring and developing talent, while also supplementing that talent through free agency, trades, the draft and international free agency. You're building for now, while also setting yourself up for the future with a continuous pipeline of talent. You know, like the Dodgers. The team that just won the World Series and has played in three of the last four Fall Classics.

40:12 “I think when I started in the game there was this thought that big markets were going to worry about one thing and us small markets get to worry about some of these other things. I actually think the first big market organization to look at it a little differently was the Red Sox. When this ownership bought the club and went with Theo… they basically were focused on a lot of things that, historically, the teams that focused on scouting and development were the small market teams. Theo came in here and said 'We're gonna build a scouting and player development machine' and they did that. What that means now is that the table stakes are a lot higher for what it means to have a complete organization now, but that’s what I think when you look at what the Dodgers have done. They have built a complete organization. Top to bottom and what makes it go is the players that that organization produces and how they think.” On building lasting success

I'm down with that. We're in the infancy stages of what Bloom is trying to build here in Boston. It has sucked so far. Not from a results standpoint, but rather from a "it's painful to lose players that I have an emotional attachment to" standpoint. Losing Mookie and then Benintendi, although wildly different players with different skill levels, is not fun. They both won a championship here, so the emotional attachment to players like that is always going to be strong.

But the fact of the matter is that Bloom turned Benintendi, a player who hasn't been very good the last two years, into five players -- Franchy Cordero, Josh Winckowski, and three players to be named later. You can't sit there and wonder, "What the hell are the Red Sox doing?" when there is a plan in place and you can see it very clearly right there in front of you. You don't have to agree with the plan, but it's there. The Red Sox are, in fact, not directionless.

Bloom gave us an hour of his time, and it's well worth the listen if you're interested in getting to know the man behind the curtain of the Boston Red Sox. iTunes and Spotify links below.