It was after Super Bowl LV that I started thinking about all the great athletes and coaches with the first name Tom. Originally I believed  "what's in a name?", but then I found quite a list of successful Toms in sports. Of course, any list of Toms, athletic or otherwise, in my opinion, begins with seven-time Super Bowl champion, Tom Brady. But the list of "Toms" is impressive.

During my search for athletes named Tom, I came across several articles about two bare-knuckle prizefighters with the first name Tom who fought for the bare-knuckle heavyweight championship of England. The story begins with Tom Molineaux, a slave born in Virginia in March of 1784. It was common for plantation owners to arrange bare-knuckle fights between slaves. When he was old enough, Molineaux participated in bare-knuckle fights. In one fight, Molineaux beat his opponent and his master earned a large sum of money. The slave owner showed his gratitude by granting Molineaux his freedom and giving him $500.

Once he was a free man, Molineaux moved to New York to sharpen his bare-knuckle fighting skills. Although records of his fights aren't available, he was dubbed the "Champion of America". After five years establishing himself as a top pugilist, he traveled to England to challenge fighters across the pond with his eye on winning bigger purses. Journalist Paul Magriel wrote of Molineaux in a 1951 edition of Phylon, “He was the first American to rise to the eminence of an international challenger”.

Although prizefighting was considered illegal, it was still popular and drew large crowds. In a piece he wrote for Grantland (2012), Brian Phillips described bare-knuckle fighting this way. "Bouts were held outdoors, on bare ground, in rings marked off from fields. The fighters wore no gloves, which probably made them safer. (Gloves were introduced to protect the hands, not the head, and allowed fighters to punch harder.) But rounds didn’t end until one man or the other went down. And there was no limit to the number of rounds that could be fought. After a fall, fighters had 30 seconds to return to the scratch, a mark in the middle of the ring."

Molineaux wanted to fight England's best and that meant a fight with Tom Cribb. Cribb was considered the best heavyweight and his fights drew as many as 10,000 fans. According to Phillips, Cribb "reportedly trained by punching the bark off trees.”

Molineaux needed a trainer and he was able to get Bill Richmond, a Virginia-born freed slave, and former bare-knuckle fighter who had displayed technical brilliance in the ring, been defeated by Cribb in 1805, and had a reputation for being a top-rated trainer. With Richmond as his second, Molineaux won his first two fights, the first over Jack Burrows who had Cribb as his second, and the second over Tom "Tom Tough" Blake on an eighth-round knockout. With two impressive victories and Richmond training him, Molineaux quickly established himself as a bare-knuckle fighter worthy of a fight with Cribb.

In his book Boxiana, celebrated journalist Pierce Egan wrote, “The amateurs were completely astonished at the improvement exhibited by Molineaux, and the punishment he dealt out was so truly tremendous, and his strength and bottom so superior, that he was deemed a proper match for the champion, Tom Cribb”. 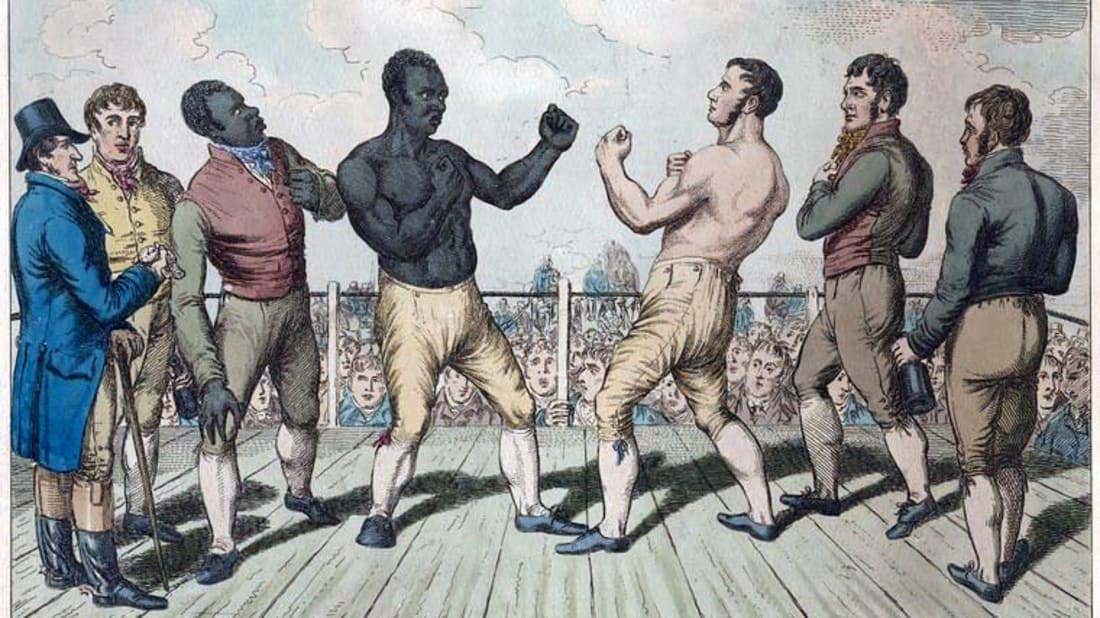 The bout between Molineaux and Cribb was scheduled for December 18, 1810, and it didn't take long for racism and nationalism to dominate the conversation. According to the book Pugilistica, one media outlet claimed, “Some persons feel alarmed at the bare idea that a black man and a foreigner should seize the championship of England, and decorate his sable brow with the hard-earned laurels of Cribb”.

On the day of the fight, despite torrential rain, there were still 10,000 in attendance and the first professional sportswriters in England were there to cover the fight. Before the fight started the crowd began taunting the Black American fighter with racial slurs, but that did little to distract Molineaux. He stood 5 foot 8 1/4" tall and weighed 198 lbs. before the fight. Cribb and those associated with bare-knuckle fighting thought it would end quickly, underestimating Molineaux's punching power.

When it began looking like Molineaux had an advantage over Cribb, hundreds of angry fans stormed the ring, attacking and injuring Molineaux. Despite the attack, Molineaux continued to dominate the fight. In the 28th round, Cribb was knocked down and failed to get up within the mandatory 30 seconds and should have been counted out, but his handlers distracted the referees while Cribb regained consciousness, and the fight was allowed to continue. Some suggested the refs were complicit and the fight was fixed.

By the 29th round, the odds which began at 4-1 in favor of Cribb, were now even, but at that point in the fight, Molineaux's eyes were almost completely shut and Cribb now had taken the advantage.

By the 40th round, after Cribb landed what some considered "lucky shots", Molineaux quit, Cribb was declared the winner, and the English crowd celebrated wildly.  Pierce Egan characterized the match as, "The most dreadful affront to British sportsmanship ever witnessed."

Molineaux sent a letter to Cribb claiming the weather contributed to his loss and demanded a rematch. He got the rematch which was scheduled for September 28th, 1811. Molineaux did not train with any discipline for the second fight, drinking heavily and taking up with prostitutes. He was not in fighting condition and in front of 15,000 people, a well-trained Tom Cribb broke Tom Molineaux's jaw and easily won the fight in 11 rounds. Richmond withdrew as his second and Molineaux never reached his potential or went on to win any major fights.

Records show Molineaux fought four more times, winning three before his prizefighting career ended in 1815. He continued to do sparring exhibitions, but suffering from alcoholism, he died on August 4th, 1818 in Galway, Ireland at the age of 34, penniless, in a military band room where he was cared for by three black soldiers who played in the band.

Despite losing two fights to Tom Cribb, Tom Molineaux had become part of bare-knuckle boxing history and in 1997 he joined Bill Richmond and Tom Cribb when he was inducted into the International Boxing Hall of Fame.

In the UK, the name Thomas currently ranks 13th in popularity amongst newborns and some have credited it to the current trend of naming babies after characters from the highly successful TV series, Peaky Blinders. The Social Security Administration lists the name Thomas as the ninth most popular name in the United States over the past 100 years. It peaked in 1951 but has been trending downward ever since. In 2020, it suddenly was on the rise again (+3).

I can't say for sure whether Tom Brady's seventh Super Bowl ring or his Super Model wife Gisele Bündchen, are responsible for the name's sudden rise in popularity, but who in their right mind would bet against Thomas Edward Patrick Brady, Jr.?