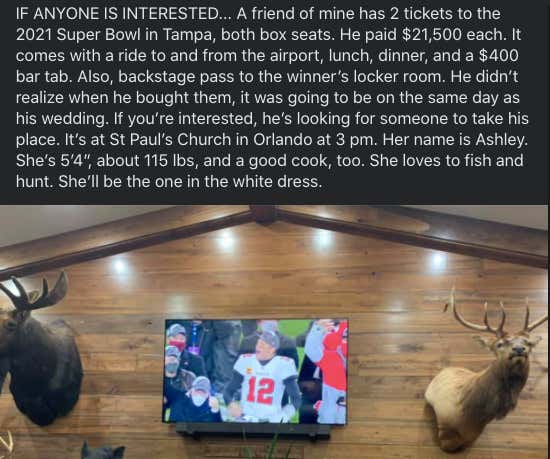 "So someone else is just going to show up at the wedding and marry this woman Ashley? She's not going to know her husband is missing the night before the wedding? The day before that maybe, when he's hanging out in Tampa? And then when this new guy shows up? What are the people in the wedding party going to say? What are the groomsmen going to say when he shows up? "Who the fuck are you?" Oh I'm filling in for this guy because he went to the Super Bowl, so I'm going to marry her." (4:17)

"Also there are no backstage passes to the winners locker room, okay? Fans don't get to go into the locker room after the game because they have a backstage pass. That doesn't fucking happen." (5:10)

"She's going to tear a rotator cuff or she's going to fucking fracture her back by fucking lifting weights that she shouldn't be lifting and then she's going to realize, you know what, I should just go to Planet Fitness and go walk on a treadmill." (8:00)

"If you're going to lie about your 3 year old watching college football, at least make a good story up. Like you know she won $500 on the Florida/LSU game." (14:20)

"Your moral is be nice to old people? Everybody knows that. Respect your elders. That fucking phrase has been around for fucking ever." (29:28)