From The Twisted History of Survivors (and plane crashes) 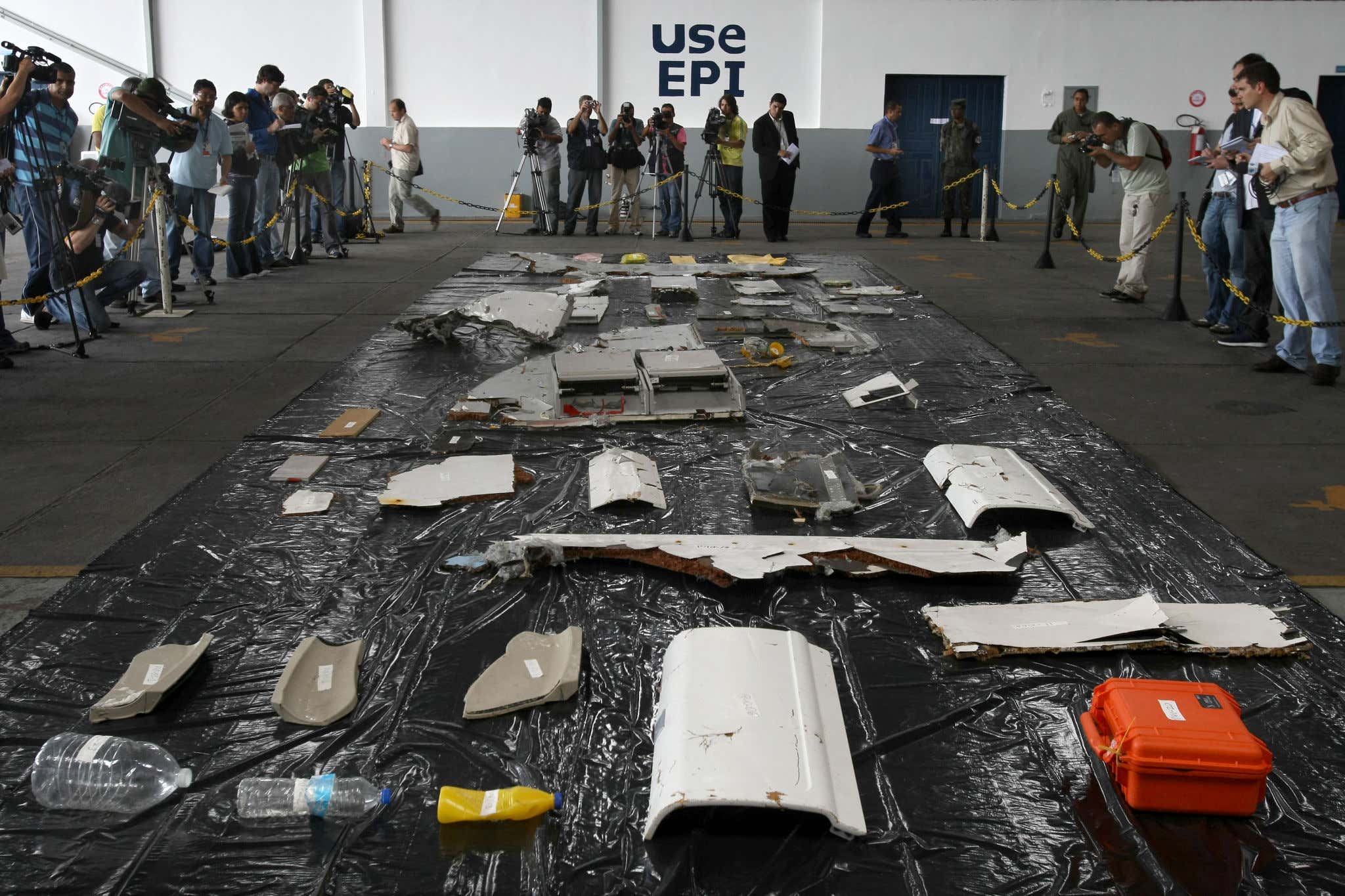 Black box revelations from the June 2009 crash paint a surprising picture of chaos in the cockpit that led to one of aviation's greatest mysteries.

Air France Flight 447 from Rio de Janeiro, Brazil, to Paris, France crashed into the Atlantic Ocean on June 1, 2009, killing all 228 passengers and crew. The aircraft's flight recorders were not recovered from the ocean floor until May, 2011 - nearly two years later.

The final report, released at a news conference in 2012, concluded that the aircraft crashed after the airspeed measurement devices on the wing were likely frozen by ice, and caused the autopilot to disconnect. The crew reacted poorly, and ultimately caused the aircraft to enter a stall, from which it did not recover. The accident is the deadliest in the history of Air France, as well as the deadliest aviation accident involving an Airbus A330.

Imagine being on an airplane doing normal things like reading, sleeping, listening to music, or watching a movie. You are completely unaware of a situation unfolding in the cockpit, because they haven't told you a thing. No announcements over the PA system, no flight attendants running back and forth causing suspicion, just peaceful silence. You slowly descend below the clouds, but it's pitch dark anyway, and it's the middle of a storm. Some turbulence is expected, but unless you are a trained pilot, you probably can't identify what is occurring from where you are sitting. This is how I imagine the 228 people felt aboard Air France Flight 447, blissfully unaware of their impending death.

It's not like I can blame the pilots for failing to update the rest of the cabin on what was happening that night, because for all intents and purposes, they really had no clue themselves:

We now understand that, indeed, AF447 passed into clouds associated with a large system of thunderstorms, its speed sensors became iced over, and the autopilot disengaged. In the ensuing confusion, the pilots lost control of the airplane because they reacted incorrectly to the loss of instrumentation and then seemed unable to comprehend the nature of the problems they had caused. Neither weather nor malfunction doomed AF447, nor a complex chain of error, but a simple but persistent mistake on the part of one of the pilots.

Just 15 minutes after a normal takeoff from Rio, the captain, Marc Dubois, a veteran with more than 11,000 hours of flight time and the most experience of the three pilots, left the cockpit to take a nap. This left an inexperienced 32-year-old named Pierre-Cédric Bonin at the controls, alongside co-pilot, David Robert, who had more than double Bonin's total flight hours.

At 2:02 am, the captain leaves the flight deck to take a nap. Within 15 minutes, everyone aboard the plane will be dead.

Now, as Vibbs points out in the latest Twisted History podcast, it's a little perplexing that Captain Dubois takes a nap so early in the flight. He doesn't even make sure the more experienced pilot (David Robert) is in-charge, or leave them with clear instructions: "Hey guys, if anything goes wrong …make sure to come and get me immediately." He doesn't even mention the plane is heading directly into a storm system (is he even aware of that himself?). We will never know what was going through Captain Dubois' head, and how much regret he would later feel as he returns to the cockpit too late.

As the plane flies into a storm system the pilots could have avoided (and still could avoid) the sensors on the wings become frozen over with ice crystals, which quickly disengages the auto-pilot. The inexperienced co-pilot Bonin is now flying manually, and has essentially been handed the controls of a massive airplane in a situation he has definitely never been in. It's important to point out, that this is not exactly the best look for the autopilot system. The computer flying the place really has no choice, as it doesn't have the correct information anymore to safely make decisions, but with no advanced warning it just disengages?

But when trouble suddenly springs up and the computer decides that it can no longer cope—on a dark night, perhaps, in turbulence, far from land—the humans might find themselves with a very incomplete notion of what's going on. They'll wonder: What instruments are reliable, and which can't be trusted? What's the most pressing threat? What's going on? Unfortunately, the vast majority of pilots will have little experience in finding the answers.

Note, however, that the plane has suffered no mechanical malfunction. Aside from the loss of airspeed indication, everything is working fine. Many airline pilots subsequently flew a simulation of the flight from this point and were able to do so without any trouble. But neither Bonin nor Roberts has ever received training in how to deal with an unreliable airspeed indicator at cruise altitude, or in flying the airplane by hand under such conditions.

At this point, I'm already terrified of my next pilot flying into a storm, the sensors freezing over, and the auto-pilot disengaging, but hopefully he doesn't do what pilot Bonin does next:

Bonin makes the fatal mistake of not communicating with co-pilot Roberts, pulling back on the side stick, and putting the airplane into a steep climb. He isn't supposed to be doing this, as it bleeds airspeed. He should be pitching the nose down, to regain speed and control.

Why he is so spooked and starts making incorrect decisions? We will never know.

For the next four minutes, Bonin pulls back on the stick, despite at one point regaining control of the aircraft and pitching down. He for some reason cannot help himself from doing the exact wrong thing, and cannot bring himself to even mention it to his co-pilot.

The stall warning alarm is blaring in the background at this point, and Roberts tries desperately to summon the Captain, WHO DOES NOT ANSWER:

Recognizing the urgency of the situation, Robert pushes a button to summon the captain.

Damn it, where is he? 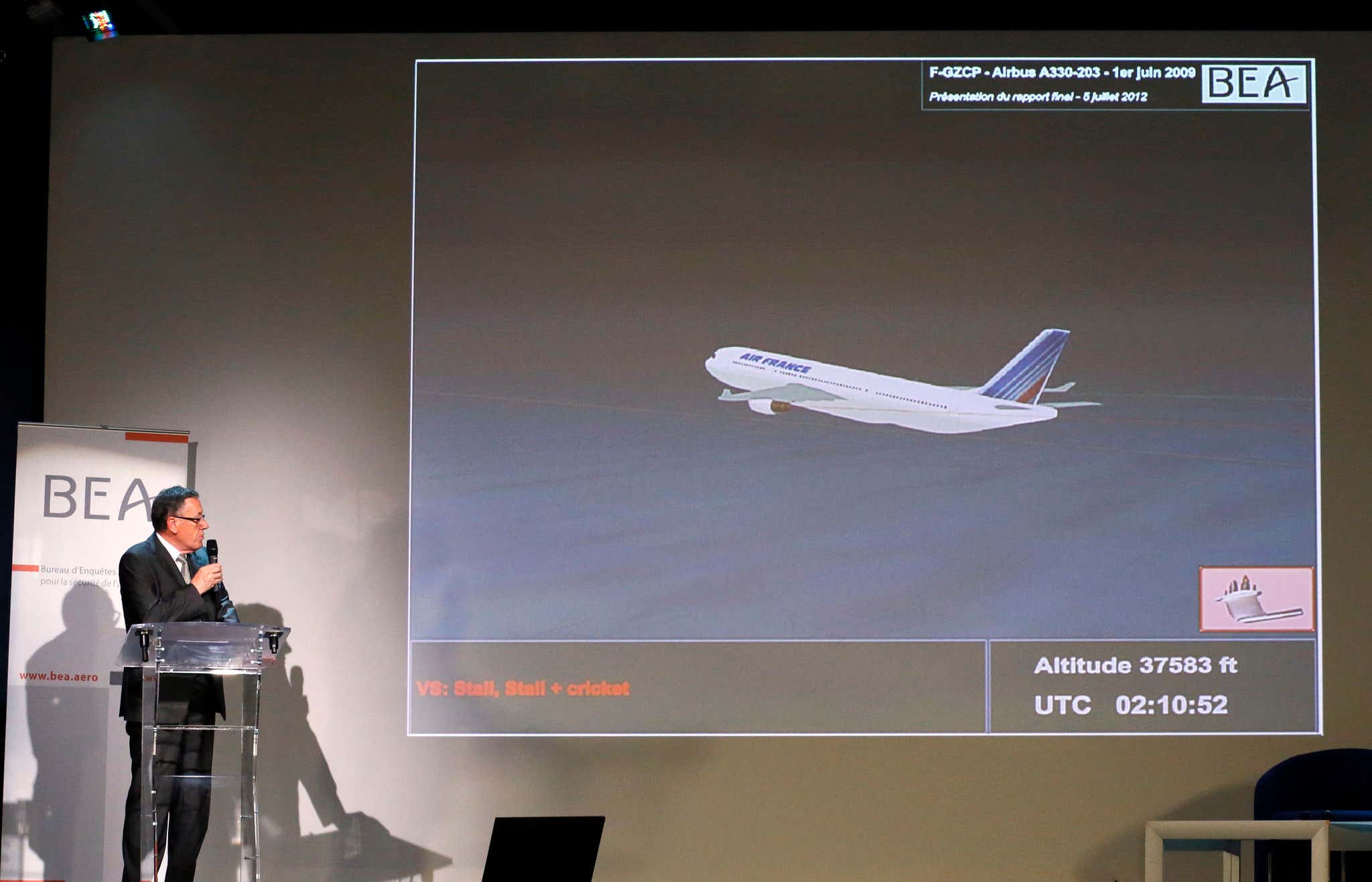 This image above shows the position in which Air France 447 ultimately hits the water. It's not in a nosedive, and while there may have been some turbulence and pitching from left to right, the aircraft is essentially bleeding speed at it "lands" on the water. It's difficult to say if any of the passengers would have even noticed something was going so terribly wrong in the cockpit until the final minutes.

A chilling detail, but this ultimately explains why co-pilot Roberts couldn't understand what Bonin was doing. This is a fully-automated airplane that is nothing like a Cessna:

Unlike the control yokes of a Boeing jetliner, the side sticks on an Airbus are "asynchronous"—that is, they move independently. "If the person in the right seat is pulling back on the joystick, the person in the left seat doesn't feel it," says Dr. David Esser, a professor of aeronautical science at Embry-Riddle Aeronautical University. "Their stick doesn't move just because the other one does, unlike the old-fashioned mechanical systems like you find in small planes, where if you turn one, the [other] one turns the same way." Robert has no idea that, despite their conversation about descending, Bonin has continued to pull back on the side stick.

All Bonin has to do to save everyone is LE GO OF THE CONTROLS COMPLETELY, and the airplane would level itself out. Or, you know, talk to his co-pilot.

As the plane approaches 10,000 feet, Robert tries to take back the controls, and pushes forward on the stick, but the plane is in "dual input" mode, and so the system averages his inputs with those of Bonin, who continues to pull back. The nose remains high.

Another tough look for the computer system, as this is similar to when an old man hits the break and the gas pedal at the same time in an automobile, and the car just decides …GAS + BREAKS = GO! Similar to the frustration we feel when multiple penalties "offset"

Maybe not similar at all, actually?

At this point, Captain Dubois is back in the cockpit, and he is not pleased.

What the hell are you doing?

Experts sort-of give him an out for not wrestling away the controls from Bonin immediately, as it would have been difficult for anyone to assess what was exactly happening, and could even (in the captain's mind) have made matters worse by jumping into the driver seat.

Unfortunately, the situation was already dire, and sitting down in the seat would have given him a better indication of what was going on.

Finally, Bonin reveals what he has been doing:

But I've had the stick back the whole time!

But it's far too late, and they do not have enough time to pitch forward and regain speed. They crash into the Atlantic, vaporizing everyone instantly. This all occurs within 15 minutes of the captain taking a nap.

It's a sad story, and I do not like being so critical of a dead guy in Pilot Bonin, but the investigations are ultimately unforgiving themselves, and it's ruled "pilot error" that caused the crash.

I encourage you to listen to the latest Twisted History for an audio version summarizing this event, as well as read the Popular Mechanics article. If you enjoy learning about plane crashes as much as I do, check out "Air Disasters" on the Smithsonian Channel, which is available through a free-trial subscription to CBS All Access. #RIP to the 228 souls on-board Air France 447 in 2009.

Did you know Large experienced a near-death experience himself? He stood up in the cabin and started handing out gum like a hero:

Have you ever been on a plane that was experiencing more than just "turbulence?" DM us @TwistedHistory