When we bought our first home 34 years ago it was our chance to take one of the holidays and celebrate it at our house. Thanksgiving had long been a favorite of my wife and me, so we grabbed it. For me, it meant family, food, and football. Doesn't get any better than that.

But then another important day came up... Super Bowl. Call me greedy, but I wanted that too.

The first Super Bowl at my house consisted of a small group of family and friends who came over to watch the game on my 27" Sony and eat eggplant parmesan. Then in 1997, I added a betting grid and it was one more thing for people to get excited about. 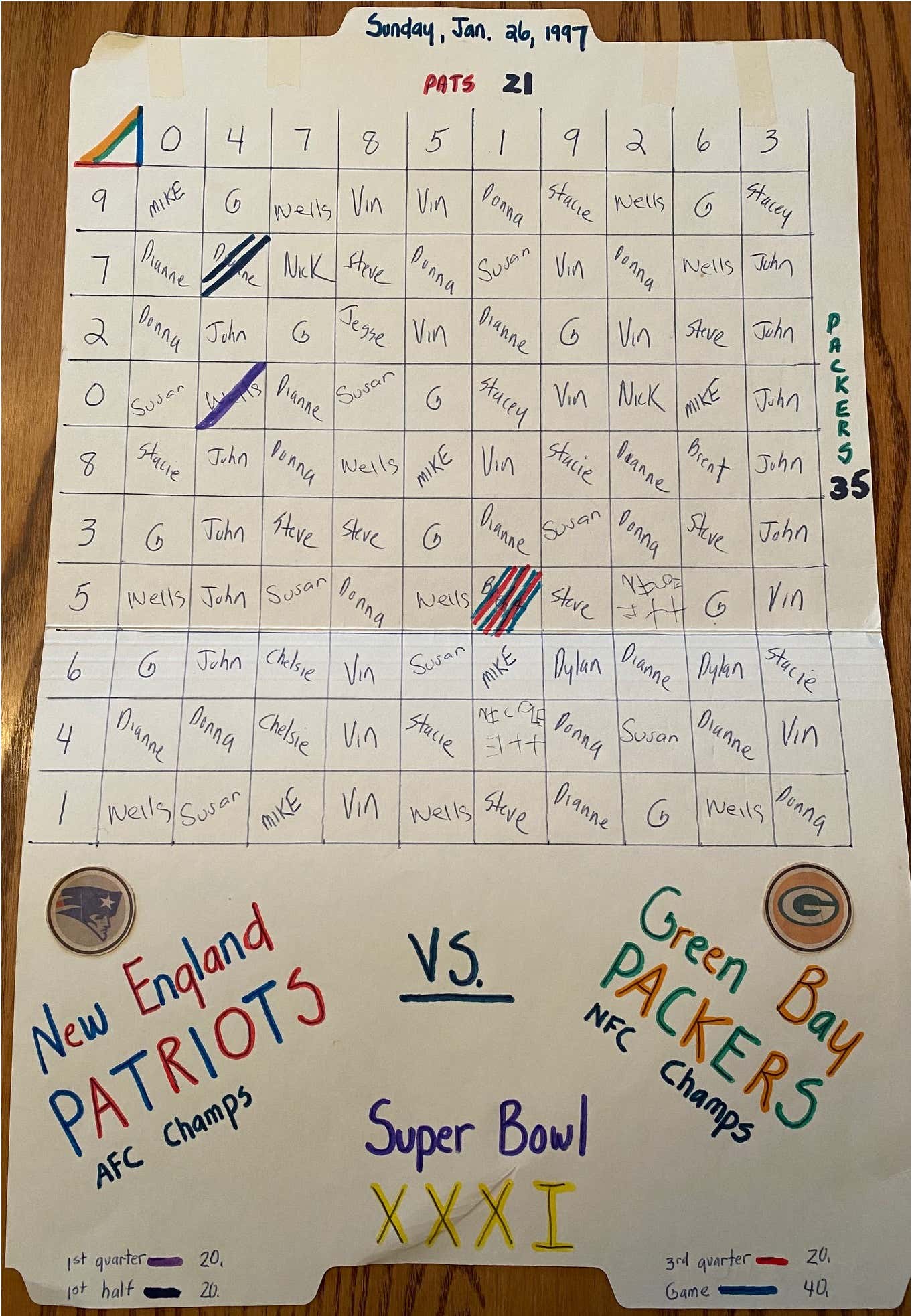 As the years rolled on the guestlist for Super Bowl grew and changed, and there was more food to be made, larger eggplant parmesans, a wall-mounted 42" flat screen, and more people who wanted in on the betting grid. Those who couldn't attend called in their bets and picked their squares over the phone. 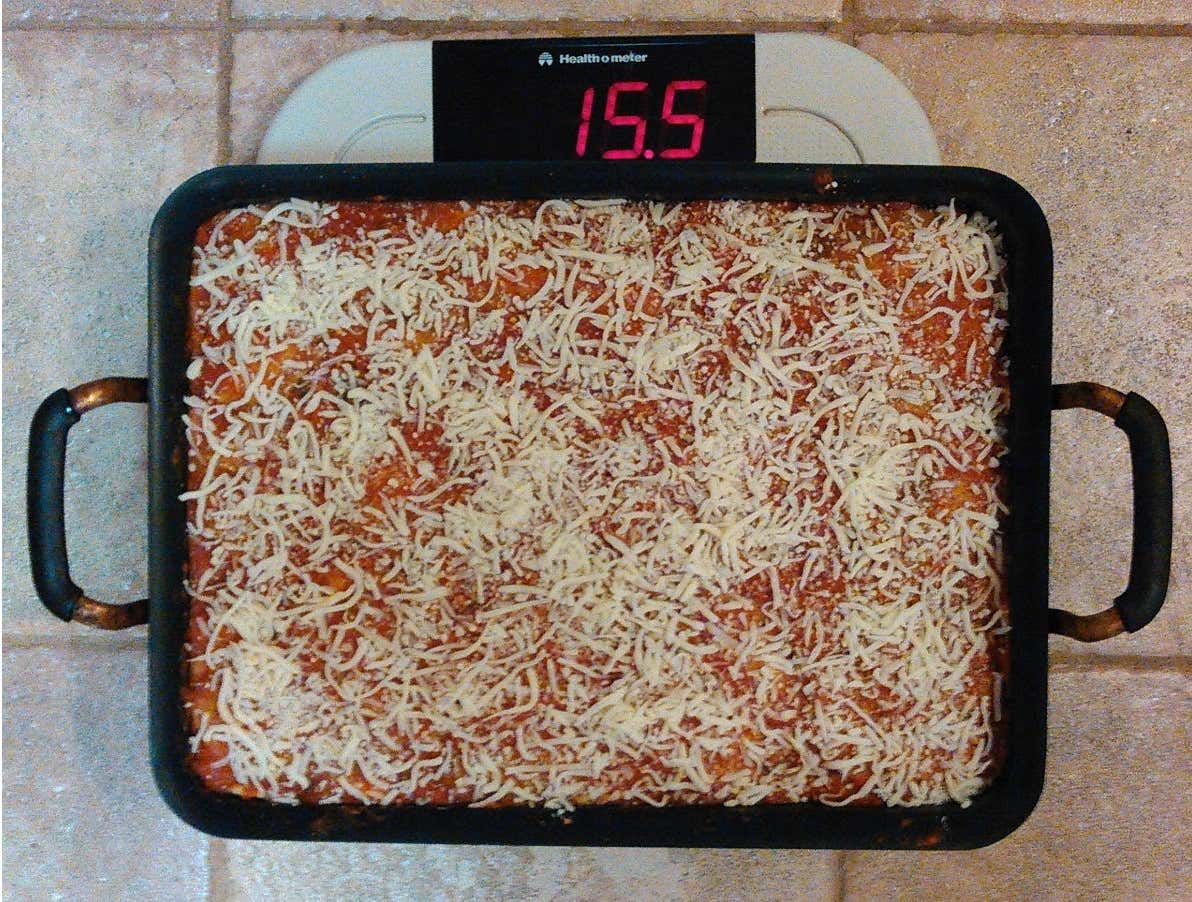 The eggplants started getting heavier, but the biggest was yet to come…

I started creating special betting grids with pictures and each one became themed and as much fun to look at as they were to participate in. At first, each square corresponded with one set of numbers, and at a dollar a square, quarters 1-3 paid out $20 and the final score paid $40.

With one set of numbers per square for the game, people who were lucky enough to get 0, 3, or 7 had a big advantage over others and there were games where one person won 3 quarters, it almost didn't seem fair. When I won or one of my family members won, it looked like the "fix" was in. It wasn't. 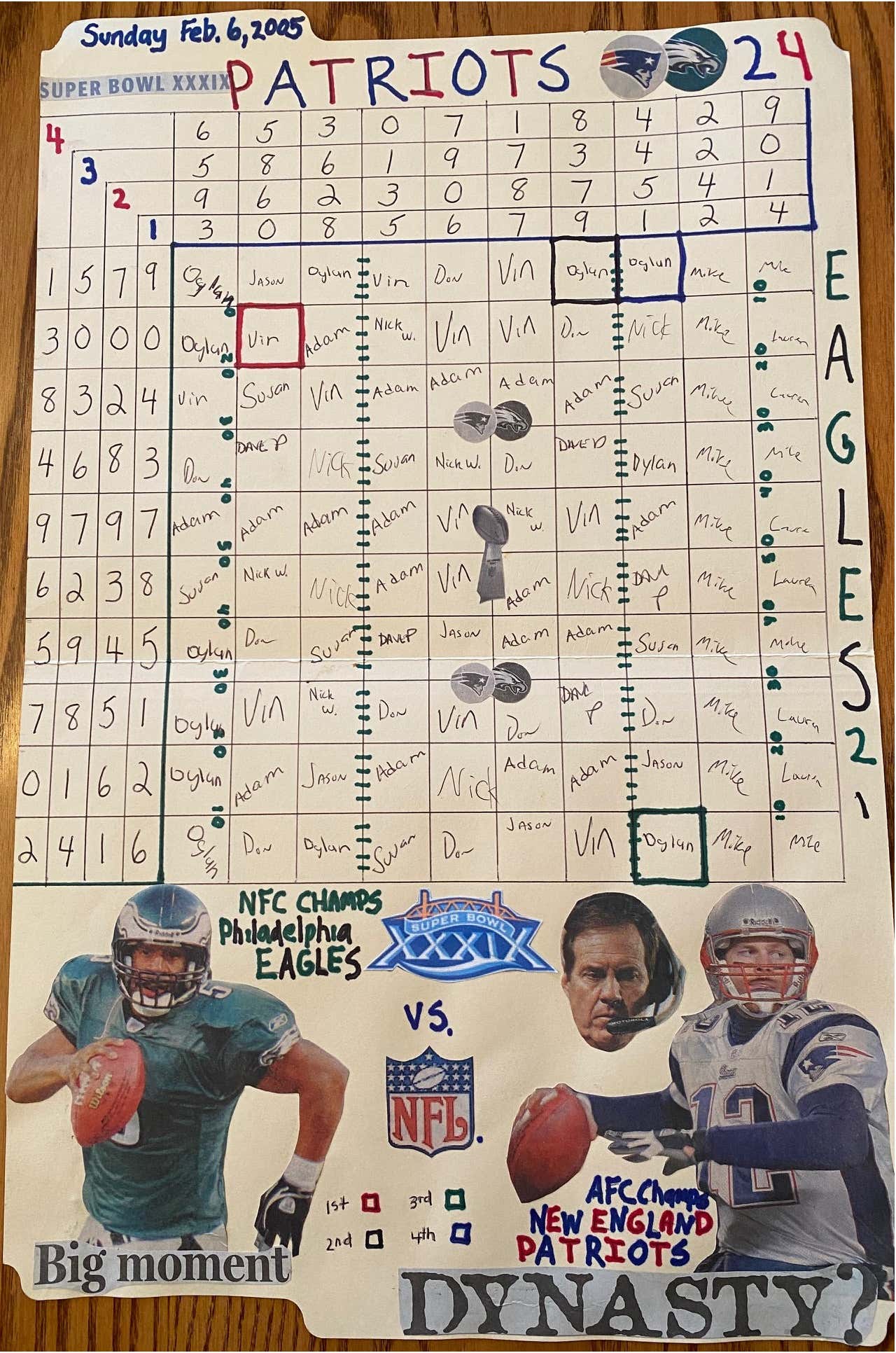 So, I decided to draw separate numbers for each of the four quarters before the game started. I figured with four sets of numbers there would be four different winners. The first couple of years there were still people who won more than one quarter like Dylan did in 2005, but it was really was the "luck of the draw". For the most part, since changing to four sets of numbers, one set for each quarter, there have been different winners throughout the game, which was my goal. 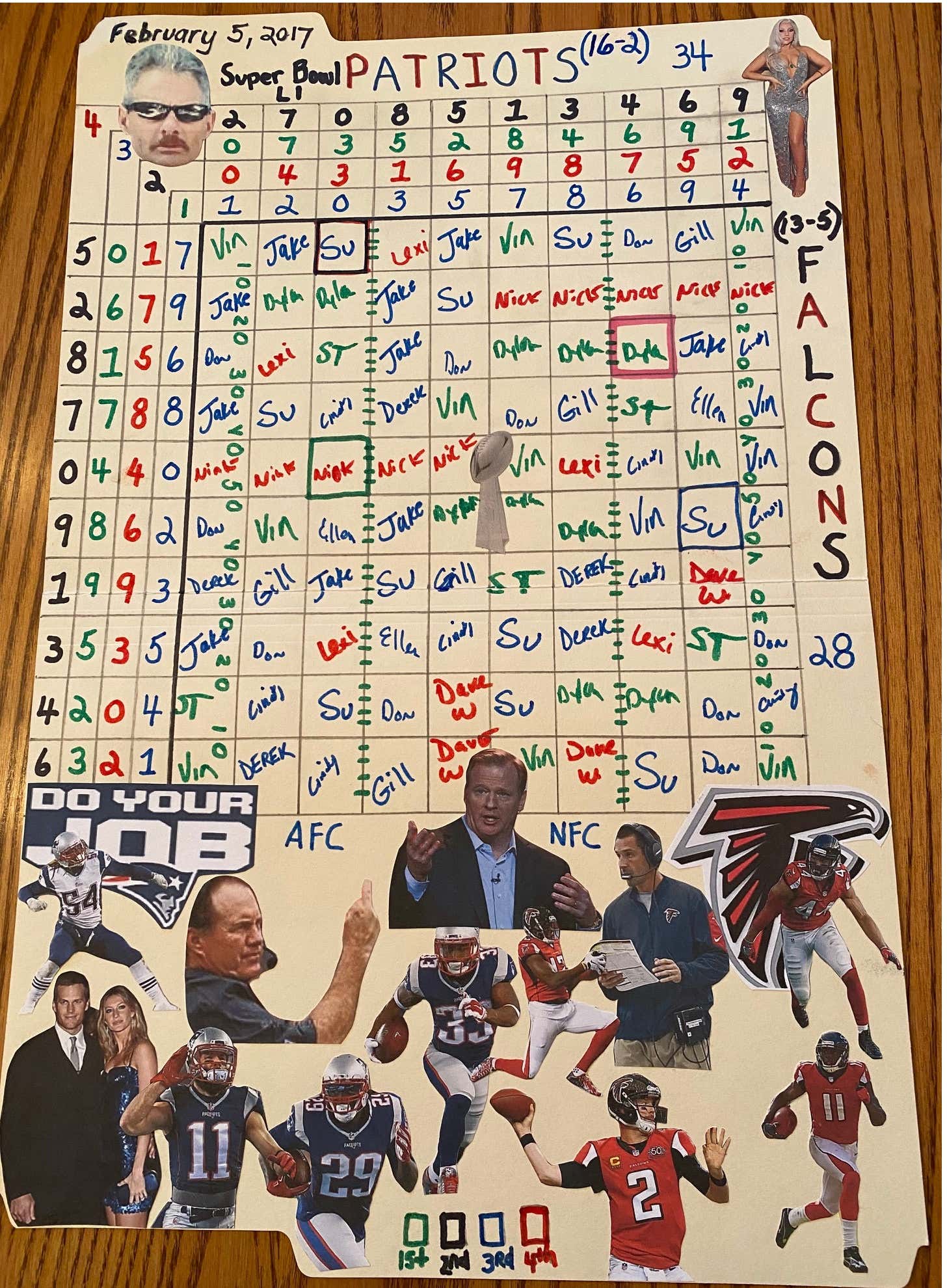 It appears the fix was in for Super Bowl LI, my family swept. Dylan should be a professional gambler, he took the game for $40!

When I was a self-employed plumber I created "Super Bowl Monday". It was a "holy day" in my house and I let my kids stay home from school and I stayed home from work. I made 'em pan-sized pancakes for breakfast and we ate all the leftovers for lunch and supper. It became a very festive weekend in my house, and now that my kids are grown and living on their own, Super Bowl Monday is a day I really miss.

When the NFL moved extra points out to the 15-yard line, creating the equivalent of a 33-yard field goal, kickers started to miss, teams started going for two to make up for the misses, and scores were no longer limited to the predictable numbers of the past. Any score could be a winner, which made the betting grid even more fun for everyone.

Last year my eggplant parm, which began as a 12 pounder back in the early days, grew to 20.5 lbs., a personal best for me, and the betting grid got even more creative. In my opinion, Super Bowl has always been the number one event in my house and Thanksgiving, well, I still love it, just not as much as Super Bowl.

This year will be very different because of COVID. Over the last 23 years, I've hosted 22 Super Bowl parties. This year could end up just me and my wife. My son Dylan and his GF are coming over for Rough N Rowdy and weather permitting, they're gonna stay for Super Bowl. They're predicting inclement weather, but this is New England… 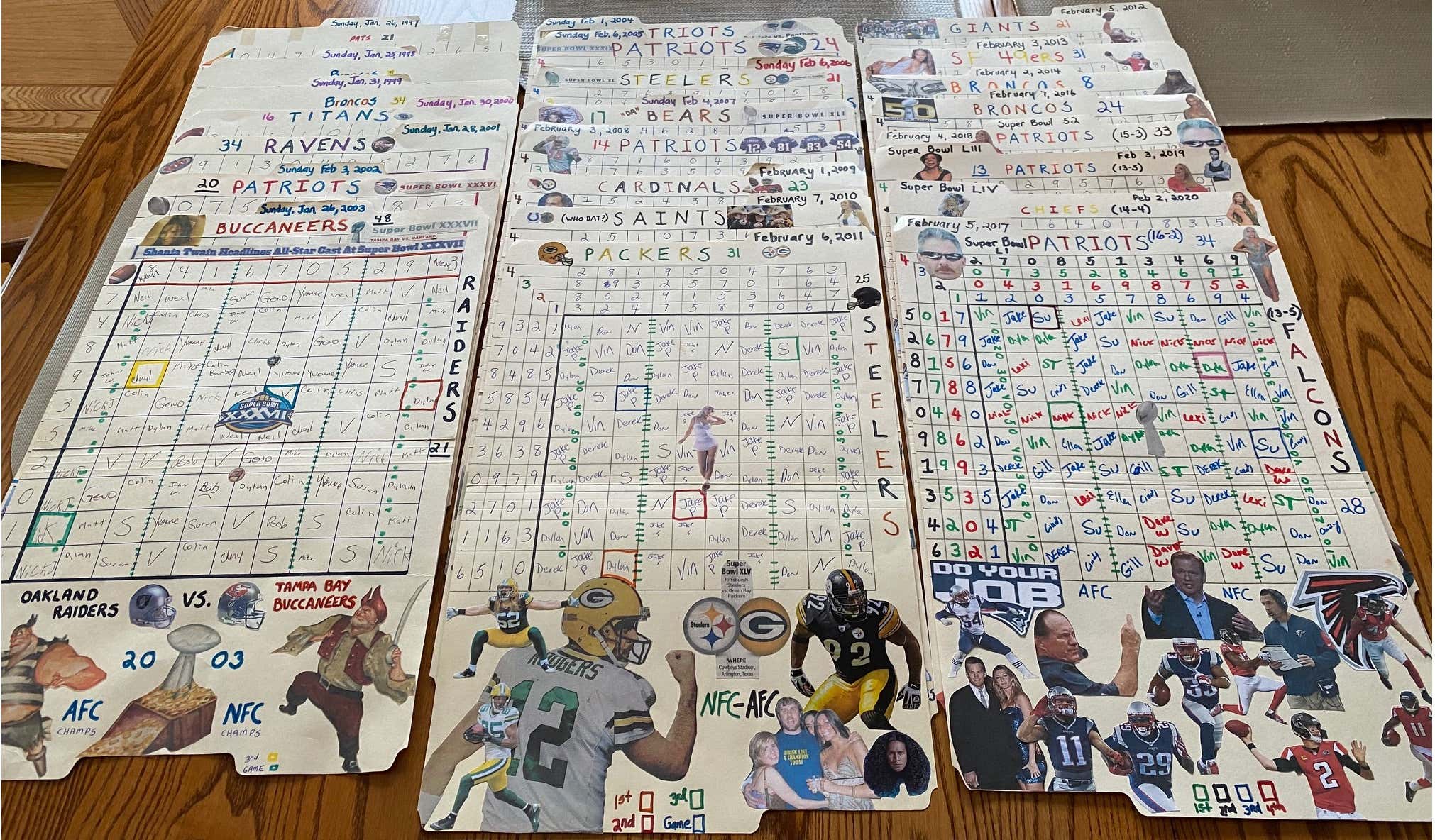 The eggplant parmesan will be downsized, there won't be the traditional themed betting grid, and there won't be a large group of family and friends to enjoy the game with, but if it ends up being the four of us, we're still gonna have a great fucking Super Bowl LV!

Stay safe and enjoy the game!