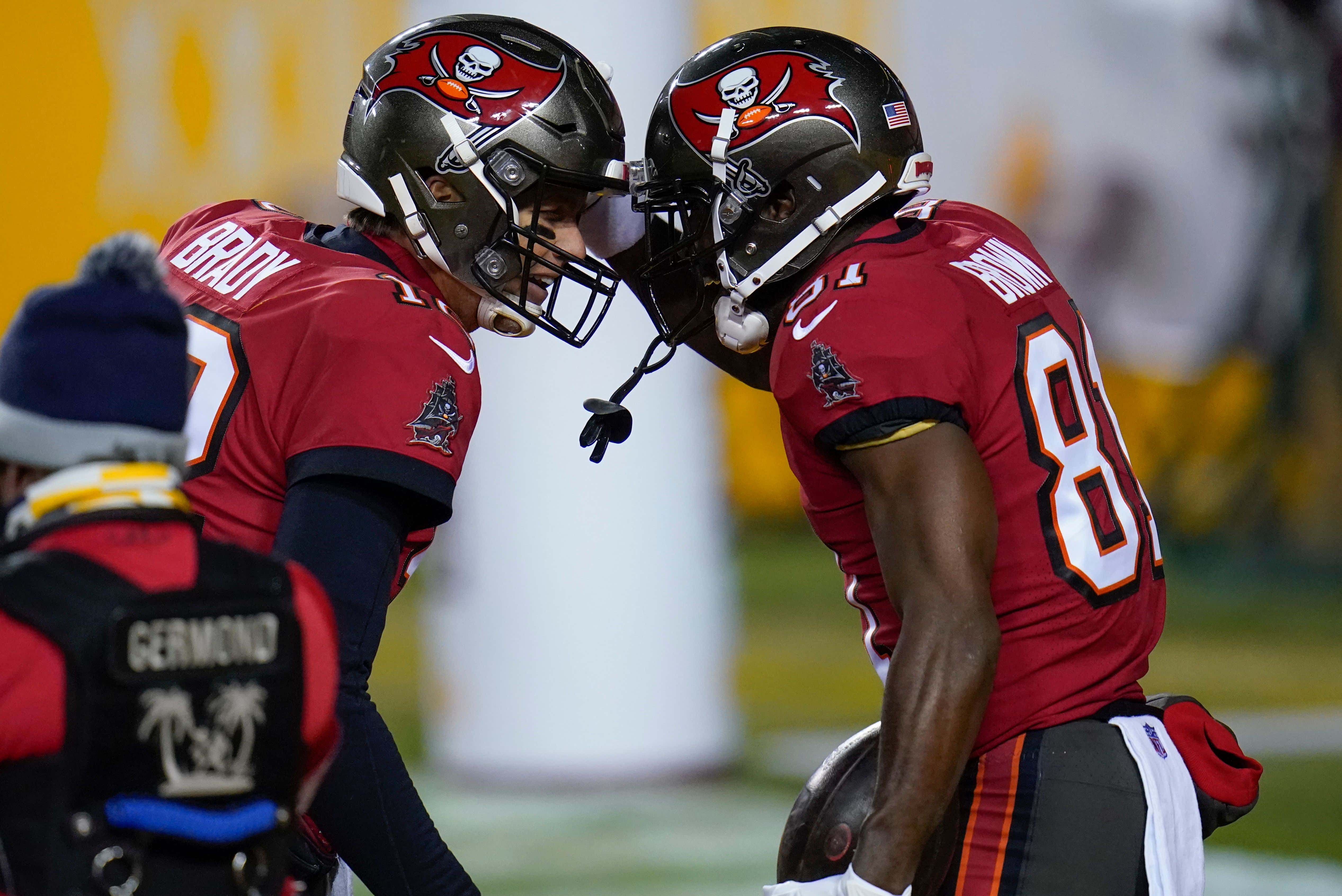 If you're from New England or know anybody who is, then you know the 11 months and 13 days since Tom Brady ruined Irish Christmas by announcing his #Braxit have been a blender drink of mixed emotions. A Kubler-Ross Grief-a-rita of denial, anger, bargaining and depression, with a dash of acceptance. On the rocks. With extra salt for the rim and our wounds.

Speaking for me personally, the "acceptance" part has been the hardest. And it hasn't been made any easier by the fact that, once Brady took over the VP of Personnel duties in Tampa Bay, he immediately signed Antonio Brown.

Since I'm being honest, I thought that climbing back into bed with Brown was going to Brady's Battle of Arnhem. His bridge too far. That Brown would do to the Bucs what he did to the Steelers, Raiders, and sort of managed to do to the Patriots even though he was only under contract for 11 days. That he would destroy them from within. Like the scorpion in the Native American fable about the scorpion to hitches a ride on a fox swimming across a river by reminding the fox he'd never sting him because they'd both drown. And when he ends up stinging the fox anyway he explains, "What did you expect? I'm a scorpion."

It's in Brown's nature to be a divisive, polarizing, me-first, team-killing narcissistic manchild. It's simply who he is. And therefore it's too much to ask that he not sting you, even if you'll both drown. And yet somehow, halfway across the stream Brady turned the scorpion into a kitten. And in a lot of ways, it might be his greatest miracle. More impressive than the final drive against St. Louis, 28-3 or reversing the human aging process.

Consider Brown's life from the time the Patriots signed him until the Bucs did:

Since GM Brady signed him:

And just to rub more Margarita salt into the wounds: Those 483 yards would've made him third on the Patriots. Brown played eight games. N'Keal Harry had 309 yards and he was in 14 games. Dammit all.

But the miracle here is not the production; no one ever questioned Brown's ability to catch a thrown football. It's that he's been a model citizen. Even as the fifth option in offensive coordinator Brady's passing attack, he hasn't said boo all season. Until yesterday. When he spoke about his personal journey in such a way that I don't even recognize who this guy is or where he came from.

“A lot of [Brady's] help has gotten me in the game and helped me get to this point where I’m at right now,” Brown said. “He helped me grow as a person, physically, mentally, and emotionally. He kind of put some things in perspective, sharpening my tune, making sure I put plans behind my goals and I’m not letting any outside noise confuse that plan.”

And earlier in the week, Brady explained this inexplicable bond they have. “I don’t have any predisposed notions of how things will go or how they should go. I just try to get to know everybody," he said. "I try to, in my own way, be a positive influence in their life. They’re a positive influence in my life. Antonio and I connected right away. He has a great love for the game — just a real perfectionist for how he plays, how he takes care of himself. Incredible football IQ. And then, again, a great skillset just as a player. And, I think, made incredible strides over the last 12 months to get from where he was at to where he’s at now.”

That's not being a good teammate. That's not being a team captain. That's being a faith healer. This is E.T. touching you with his glowy fingertip, only it heals your soul instead of the cut on your finger. Brady has done the impossible with this guy. Just through whatever positive energy radiates out of his unimaginably blue eyes, he's changed another man's life in a way that hundreds of teammates, coaches, trainers, advisers, friends and family were unable to.

Bear in mind, it was just a year and a half ago, this same Antonio Brown was arriving at Raiders camp in a hot air balloon with feet that were frostbitten from a cryofreeze procedure he had done on them. He then proceeded to conduct a one man wildcat strike over his helmet, secretly record a phone call with Jon Gruden and release it to the world without permission. Now he's a model citizen. All because of the presence of one man. One man who can't be an actual man. He has to be a being from another dimension, sent here to teach us how to get the best out of one another.

That's the only explanation. If Tom Brady can fix Antonio Brown, he is not one of us. And he'll be doing this for the rest of our lives.