Monumental - “Braden emerged as a top NHL goaltender and we are pleased to sign him to a long-term contract,” said MacLellan. “We feel Braden is just entering his prime and in his young career has already established himself as one of the best goaltenders in the history of our franchise. He is an athletic goaltender with a tremendous work ethic and is a big part of our future.”

This is pretty much the perfect deal. Got Holts locked up long-term in the prime of his career. He’s an absolute workhouse, playing 73 of the 82 games last season, including a Caps record 27 straight, while posting 9 shutouts along the way. Then fucked around in the playoffs with a 1.71 GAA and .944 Save %. And at only 25 years old, the Caps now have their backbone for the next 5 seasons locked up for only 6.1 million a year. It’s a great deal for everyone involved. When Holtby is on his A game, he’s the brick wall from Wayne Gretzky’s 3D Hockey. Unbeatable. With the offseason additions of Justin Williams and TJ Oshie, it’s hard not to consider the Caps favorites coming out of the East. Time to hit the gym, don’t want to get tired when lifting the Cup. 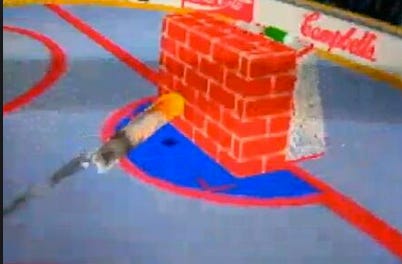