(Source) – The league is hoping it will “wear down” the New England Patriots quarterback in negotiations surrounding his appeal and get him to accept some sort of suspension for his alleged role in the ball deflation scandal, Bleacher Report’s Jason Cole said in a video posted Friday, citing sources close to the NFL. “The league is of the belief,” Cole said, “that they will be able to get a deal done with Brady and (be) able to wear him down and get him to accept a deal that will include him missing games as a result of the Deflategate investigation.”

So there it is. There’s why the NFL has taken an eternity to get DeflateGate sussed out. They’re just trying to wear down TB12 like he’s Cersei Lannister. Keep him in captivity long enough that he just decides to say “fuck it, fine, I’ll say I did it if it means we can just get this over with.” Remain undecided right until the last minute, hoping Tom decides it’s time to start focusing on football then they can make the most marketable player in the league take a shame walk. All because a couple of powerful owners are sick of getting their asses kicked by him.

But guess what, you’re fucking with the wrong hombre. You think Tom is just going to kiss Goodell’s feet if he drags them long enough? Fuck that. We’re already warred up. Tom could’ve rolled over and died when he wasn’t the outright starter at Michigan. Could’ve said “Not worth it” when he wasn’t selected until the 6th round. When he was 4th on the depth chart no one would’ve blamed him if he decided to hang em up and become an insurance salesman. But that’s not who Tom Brady is. Losing isn’t in his blood. Giving up is not in his blood. You want to dance, Roger? Let’s dance! Tom will dance like Lionel Richie, all night long. 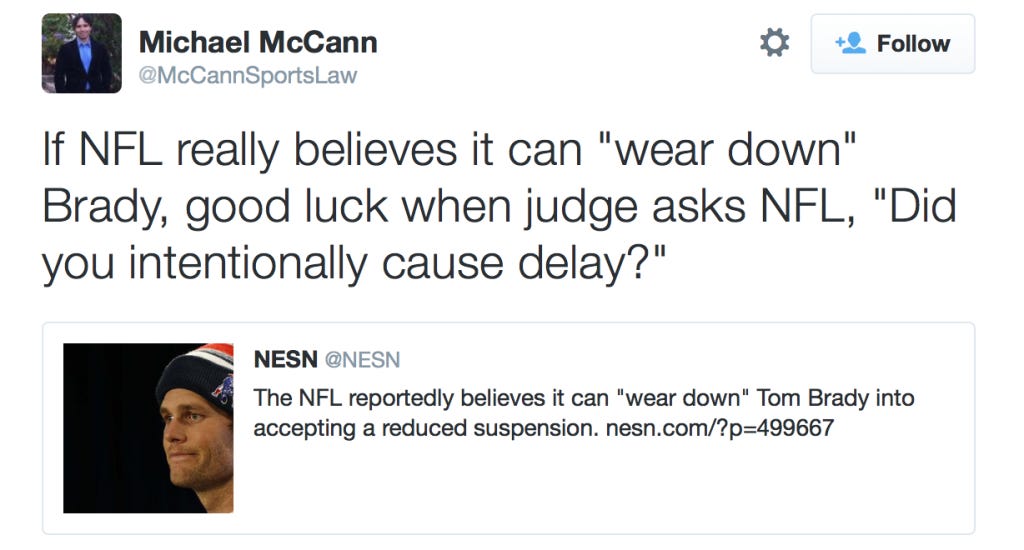