Not to be confused with the pizza guy with that one (sound) bite, Papa John Schnatter, Barstool Sports instagram is, to most people who have regular sex non stoolies, their only intake of the Barstool Sports world. They see it as a faceless Instagram account that has accumulated over 9.5 million followers (that is 19 million eyes, or 9.5 million Kirby Puckett's for those keeping score at home).

It used to be as unclear as a glaucoma riddled eye as to how somebody would get their viral worthy videos on the main page. That is, until Tommy Smokes, KB, and myself worked on a blog over the spring titled How to Easily Get Your Content Posted on the Barstool Instagram. A blog that featured we three giving a Barstool Instagram hopeful the runaround, and was NOT informative in the slightest bit. Hell, one could even call it bullying.

A fun blog to make for certain, but now I have learned those Barstool Instagram curious (BI-curious for short) oftentimes Google how to be posted.

And the number one result? Our blog.

At first, I was't complaining. More clicks for me, and this was a blog we all worked hard on. But soon I came to realize that not a soul that searched actually read the blog, they just saw the names of the authors. And since that fateful day in April, our DMs have been flooded by these Bi-Curious content creators.

After nearly a years worth sample size, I've come to find out theres certain types of people more adamant than others when it comes to achieving their goal of being called a "pussy" or a REDACTED (Editors note do not publish: maybe replace with "straight challenged"? ) by millions of level headed Barstool commenters. Much like mathematics, there's an order of operations for the most adamant type of post-crazed people, and again like math, post hopefuls also follow PEMDAS. 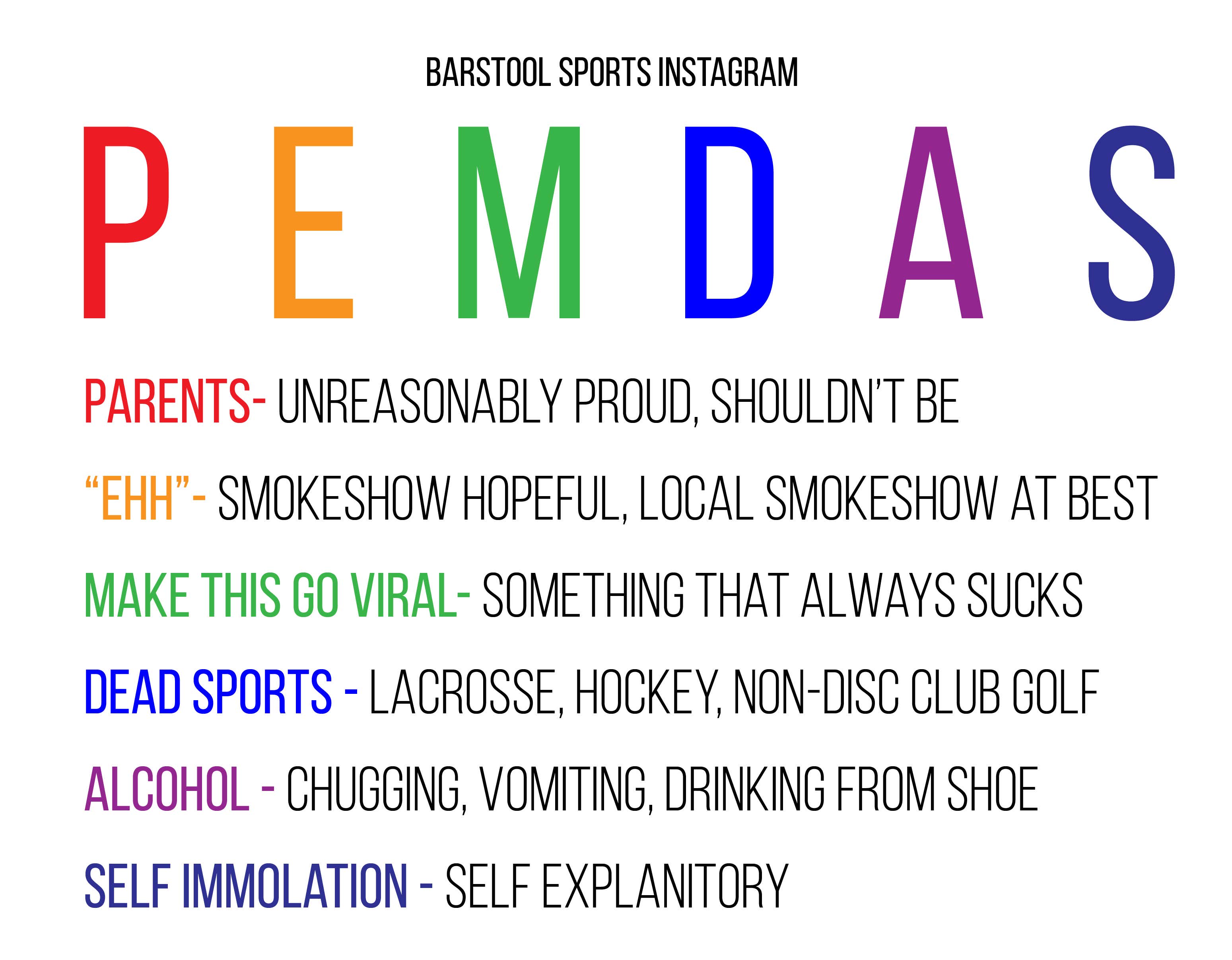 I won't bore you with the dead sports, and I'll leave the "Ehh" to our boys in Chicago. Alcohol was the feature in the first blog, and the amount of self-immolation DM's we get would lead me to believe 80% of our followers are Tibetan monks. My DM's have seen more 3rd degree than Ted Kennedy on Chappaquiddick.

We can save those for a later time.

Today, we are highlighting the most persistent of the bunch. The P in PEMDAS. The parents. Now if you are the "Marylin Monroe-type" you may be asking "What are those?". Well let me explain, parents are, more often than not, over supportive figures that raise smaller humans. And I don't think being overly supportive is a bad thing, hell I wish my dad would've supported my dream of being a baseball player rather than forcing me into needlecraft. Maybe that's why when I receive a DM from a parent, I feel bitter, jealous, and angry.

So before I dive into this interaction with this parent I will say, is she a good mom for wanting her child to gain recognition? Yes. Is she unlucky that she asked me, KB, and Tommy? Also yes.

Unlike any asker in the past, this woman added all 3 of us to the same group. Making this SIGNIFICANTLY easier.

I answered by saying I loved the video, lyingly, as I didn't even watch it.

Tommy does his job and flings out a compliment, and asking for a few more details. Apparently the video in question is a podcast, in which she wanted posted in its entirety on the Barstool Instagram.

Lady, the Barstool Instagram won't even post my podcast and we have damn near triple digit listeners, so wait in line.

The compliment lands with laser precision.

Kyle assures her that we are the ones thankful for her, and her talented child. And while talented, he is still exactly that, a child. We needed parent supervision of her child signing his agreement to be posted.

But, much like Brandon Walker's dogs, the pseudonym of "Little Ripper" was short lived. Unfortunately, after checking the video records, it turned out had posted a child who goes by Little Ripper 5 years ago. Luckily for all of our sakes, there were available names for her to choose from.

And with that, a new legend, Little Gnarly was born. Now all we needed was the man himself to sign off on this whole thing and we would happily throw this multi-hour podcast on the Instagram account.

We knew it would be a long shot, as no parent would make their chi- 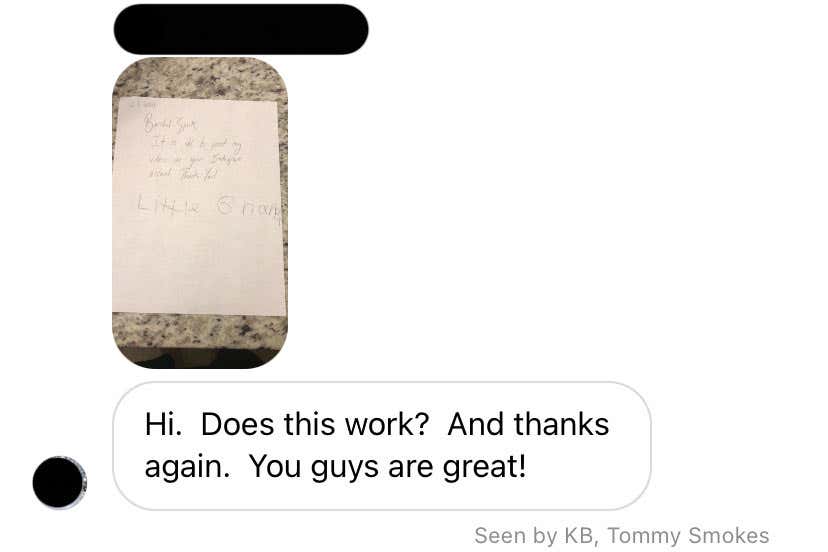 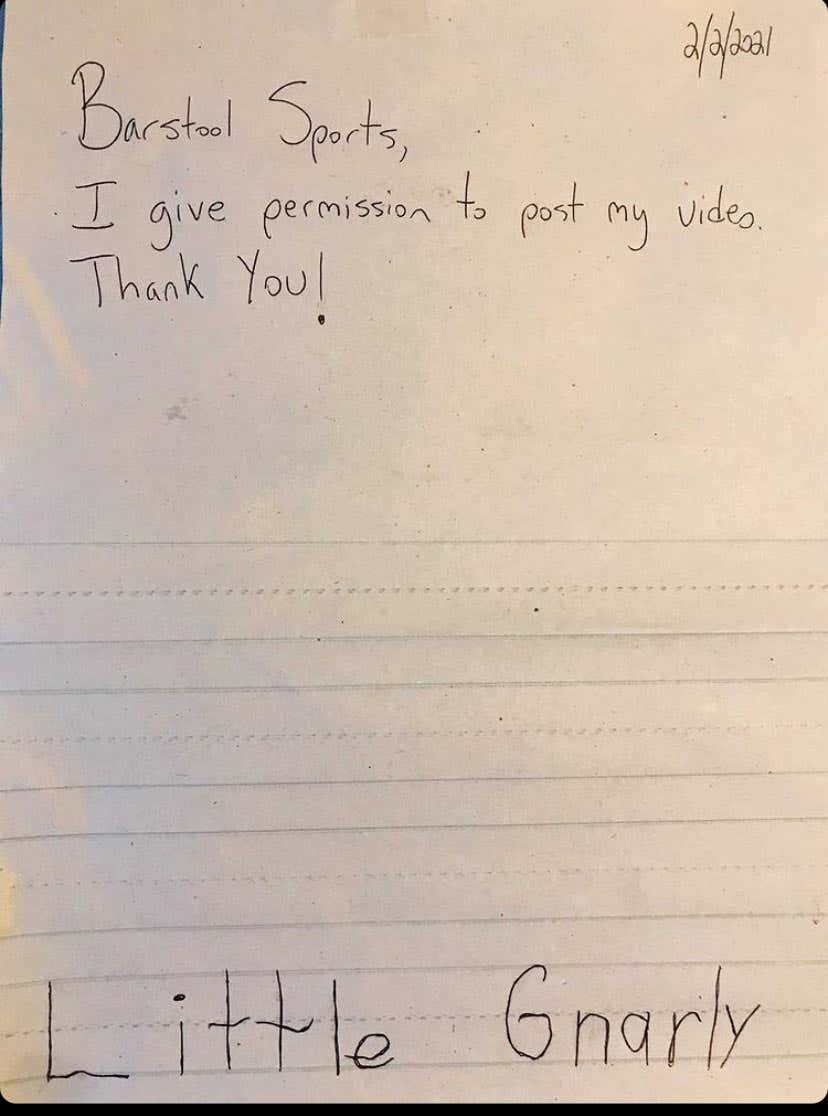 Ugh. Another speed bump. Turns out my supervisor Nate doesn't like the name Little Gnarly, for fear of confusion with a rapper. As much as it pained me, I needed to ask for another name.

This woman had more names than the flight logs. Truly an impressive feat. Due to my favorite of these names being trademarked by a coworker, we had to settle for the second best. World, meet Little Boardslider.

One step forward 2 steps back. The new name was approved, but now we need a new signature. When it rains it pours, because while we were trying to help this mother, she allowed her son to go to "Pre-K" to "learn". To be honest I questioned her commitment to be posted. To speed up the process, we asked if she could forge her sons fake name.

We knew this was a reach. An adult forging her sons fake name? The chances of response were slim to none. 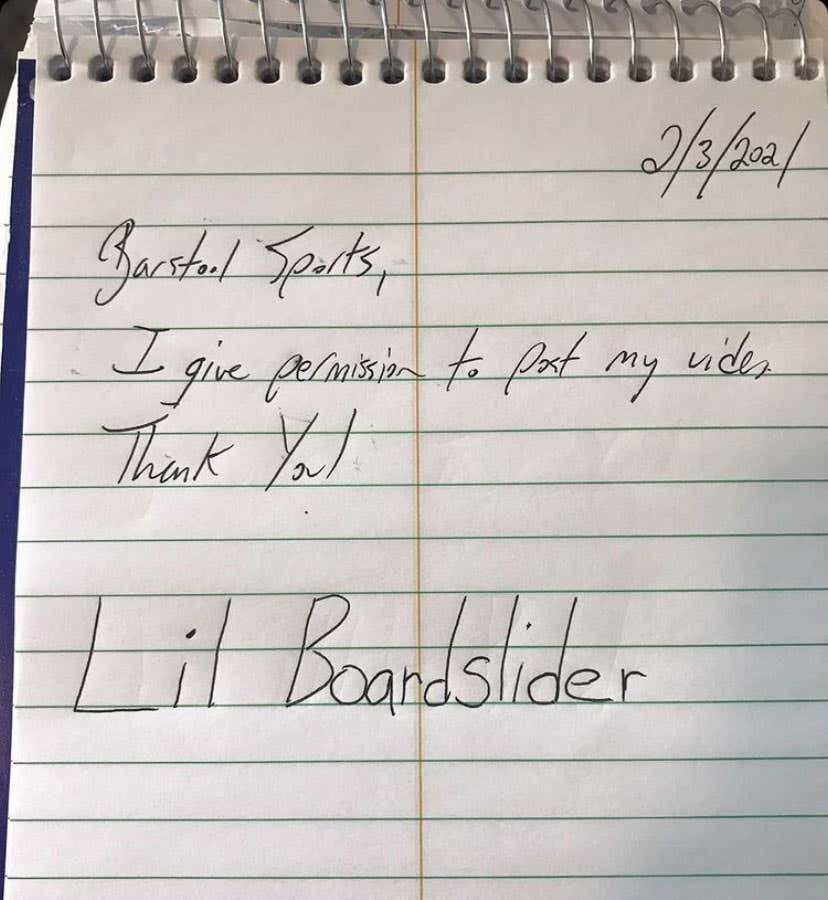 Zero effort. This was written at at least a 4th grade level. I crossed my fingers and prayed it'd pass forgery inspection.

It did not. Kyle had to break the news. 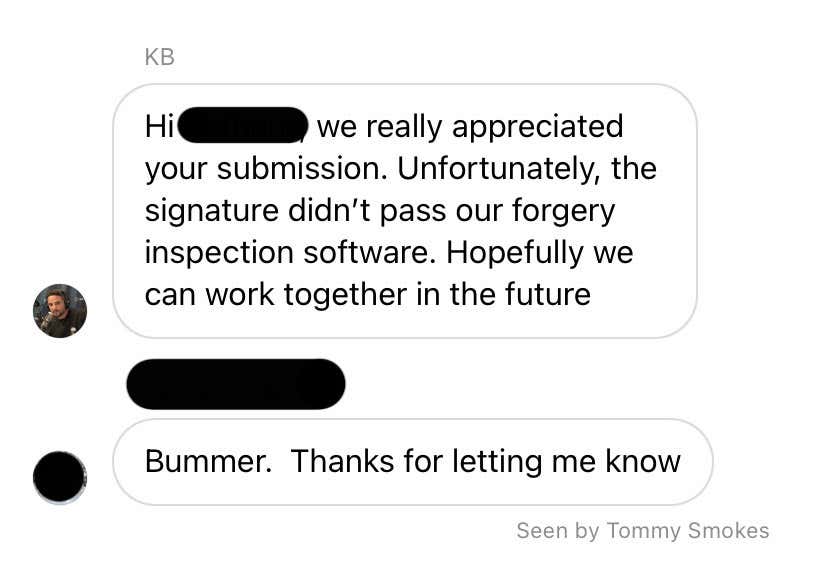 A bummer indeed. Luckily Kyle didn't burn the bridge, and maybe with practice this mom will be able to pass our advanced forgery systems. I hope and pray that Lil Boardslider will ride again.