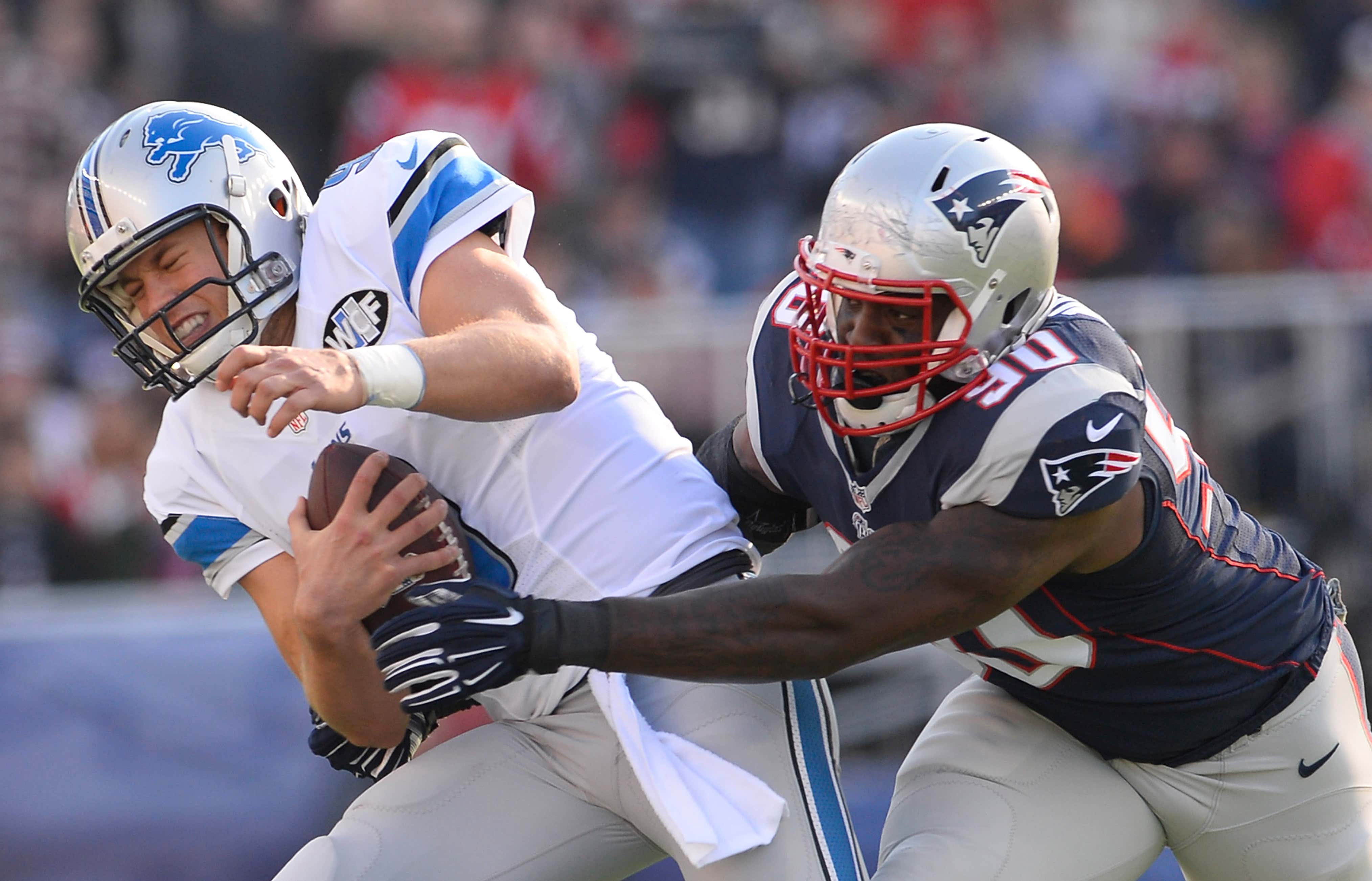 Last week, while assessing the chances of the Patriots swinging a deal for Matthew Stafford, I mentioned "The Matt Patricia Factor":

Plus: They worked together for almost three seasons. Minus: Those seasons were a tsunami of wretched awfulness. Patricia was one of the least popular head coaches in a league that had Adam Gase in it. But according to beat reporter Justin Rogers said that shouldn't be an issue."Those two sides got off to a rocky start in year one," he said in an interview with Tom E. Curran. "In New England, Tom Brady was treated like any other player and Matt Patricia came in and tried to do something similar in Detroit, criticized Stafford in a meeting using some adult language and it was not appreciated. Years two and three, Patricia came in and tried to reset the relationship. For those last two seasons, the big boy pants were put on and I cannot see that being a hang-up to preventing Stafford from coming to New England.”

So alright. It's not hard to imagine Stafford being ingrained in that Lions' culture where even reporters griped about players having to run laps in practice and Patricia not being used to taking about 20-30% off the verbal abuse that everyone's accustomed to in New England. And maybe bygones have gone by. I'll take Rogers word for it.

I guess I shouldn't have. Because Curran has an update:

Source - Stafford just lived through the Matt Patricia Era in Detroit. The former Patriots defensive coordinator ran a .500 franchise under Jim Caldwell onto the rocks in less than three seasons. Patricia has rejoined the Patriots staff this offseason. Probably not a selling point.

In the end, I concluded the Patriots would be in on the bidding, just not all in. I said there was a 15% chance of them landing Stafford. That they'd like to have him. Like, not love. A guess on my part. Based on the style of quarterback he is, what kind of a fit he'd be in their system, and what his sticker price would be. As well as this bad intel that things were good between Patricia and him. But a guess that appears to be spot on, based the report  in MMQB that the Pats only offered a 2nd rounder plus a player.

So what conclusion can we draw from this? Does this mean the Patriots can't attract decent players? Are they doomed to be the Red Sox of the 1990s, when guys like David Justice were having clauses written into their contracts saying they couldn't be sent to Boston? Is the environment here so toxic that no one will take Mr. Kraft's money? Does this mean that Matt Patricia is a chubby, bearded, walking ball of free agent repellent? What does it say that Matthew Stafford was willing to play anywhere else but New England?

Simple. It means that Matthew Stafford does not have what it takes to be a Patriot. Nothing more, nothing less.

With all due respect, but the Pats have been rejected by much, much better players than a one-time Pro Bowl quarterback who's had two double digit win seasons in 12 years. At the risk of sounding snobbish, around here we prefer our quarterbacks to have won at least one playoff game in their dozen seasons in the league. If an offensive player can't stand the thought of being in the same building as a defensive consultant because that defensive consultant once used sailor talk in his presence, he's useless to this organization anyway. This Dynasty has been built on mentally tough players who are willing to pay the price to succeed. Who'll put in the work, be coached hard, put the team first and sacrifice for the greater good. To use the phrase the Detroit reporter used, they have no need for guys who don't come in fully equipped with big boy pants.

So yeah, you'll have to excuse me if I'm not panicking because Matthew "The GOAT" Stafford decides he can't hack it here. If Bill Belichick has said it once, he's said it a thousand times: He's not an easy man to play for. It's not for everybody.

And as far as this narrative coming out of this that Patricia's presence on the staff is going to be a problem, riddle me this. How do you explain all his former players in New England jumping at the chance to go play for him in Detroit? LeGarrette Blount. Danny Amendola. Trey Flowers. Justin Coleman. Danny Shelton. Duron Harmon. Jamie Collins. Patricia went to Detroit and took over an organization that was systemically resistant to hard work, discipline and accountability. But he attracted players who were used to the Patriots way of doing things. Who experienced first hand what it had done for their careers and wanted more of the same. Unfortunately for his career, not enough players to change the culture of the Lions. But he's going back to a locker room filled with such players.

None of whom will be Matthew Stafford. And that's just fine by me. Nobody can say for sure who the next QB1 of the Patriots will be. But whoever it turns out to be, the one thing we'll know for sure is he's dedicated to the cause, unlike Stafford. But that's a HIM problem, not an US problem. Good riddance. In New England, it's still, "Winners Only Wanted Here."