Happy Monday everyone. For anyone that missed the first blogs in this series which covered the first four United States Presidents, you can check them out here. For a quick summary of what these are and will continue to be is every Monday: I'm running through what we collectively didn't learn in school about United States presidents, starting with Washington and working my way toward now. This isn’t at all about policy or politics or what laws and bills they did or did not approve of. The goal here is simply to provide you with some more information on some of the most powerful dudes to ever walk this planet that our educations left out. Maybe that will be enough, maybe it will send you on a journey to discover even more on your own time. I think I am just going to include this beginning paragraph every time for clarity, and those who have tuned in (and continue to do so thank you for your support) will know to skip it. Regardless, I’m happy you're here.

James Monroe, the fifth person to ever be President of the United States. Back-to-back Jameses in the Oval Office? Who saw that one coming? Now, Monroe is someone that I only remember learning a single thing about (we'll get to that in the next paragraph) in my school curriculum (outside of strong-arming myself out of boredom to memorizing the presidents in order from a poster on the wall of my fourth grade classroom) That is going to be the case with a ton of these guys, and is essentially the reason that I am even doing this entire series, so I am excited. This is a STEEP drop off in familiarity, clearly.

- The Monroe Doctrine - During hisannual message to Congress in 1823, Monroe sent a verbal message to Europe to stay out of the Americas for purposes of acquisition and colonization, threatening United States intervention if someone did. Many consider this message of warning to be the first formal statement made regarding the United States's foreign policy. HOWEVER, this name we all learned about it through actually did not become known as "The Monroe Doctrine" until 30 years after he delivered it to congress.

- He died on the 4th of July - You know what? I have decided that when adjacent things like this come up in my previous blogs, I am going to include them in the "What we learned" section because we have and we're doing some serious learning here. Like John Adams and Thomas Jefferson (and almost James Madison) Monroe died on the 4th of July, adding to the bizarro-world scenario that 3/5ths of our all-NBA starting five inaugural presidents team died on America's most notable day.

- He was a hero at the Battle of Trenton - You know that famous photo, maybe the most famous in American history, of George Washington standing in a boat crossing the Delaware River? This one. 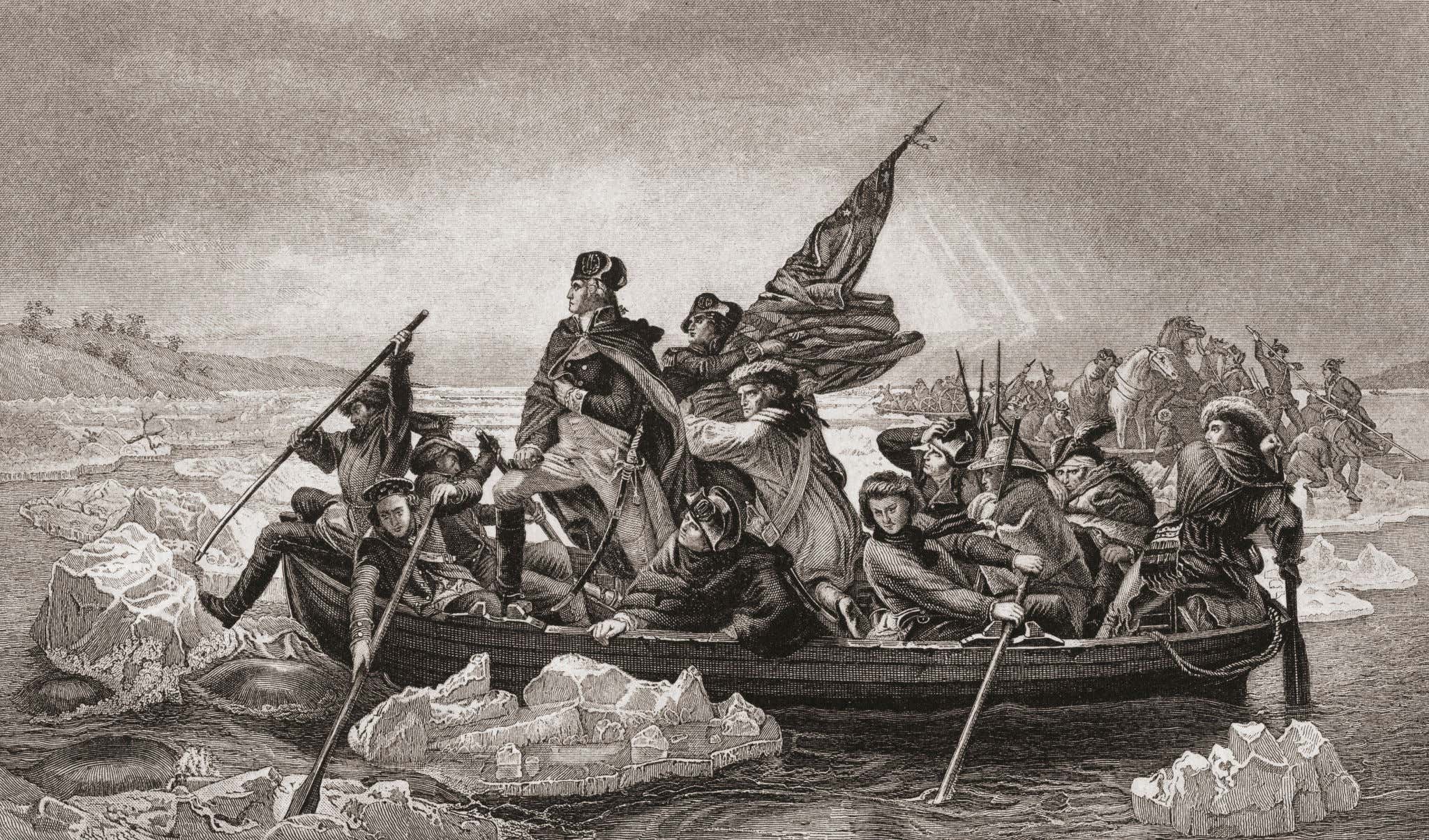 Well, when Washington was "leading the way," a teenage James Monroe was already on the other side getting after it. Three  regiments of roughly 1,400 men total were stationed at Trenton under the command of Colonel Johann Rall. Washington planned to bring 2,400 Continental soldiers across the river overnight at McKonkey’s Ferry, march to Trenton, and attack before dawn. James Monroe was with this contingent.

Here is an excerpt from his own autobiography, written in third person (to avoid confusion there) about the battle.

The command of the vanguard, consisting of 50 men, was given to Captain William Washington, of the Third Virginia Regiment . . . Lieutenant Monroe promptly offered his services to act as a subaltern under him, which was promptly accepted.  On the 25th of December, 1776, they passed the Delaware in front of the army, in the dusk of the evening, at [McKonkey’s] ferry, 10 miles above Trenton, and hastened to a point, about one and one-half miles from it, at which the road by which they descended intersected that which led from Trenton to Princeton, for the purpose, in obedience of orders, of cutting off all communication between them and from the country to Trenton.

- He was Thomas Jefferson's apprentice - Like a gargantuan number of our presidents, and 90 percent of the guys you went to college with who were political science majors, Monroe tried to be a lawyer for a bit. Where did he give this a shot? Under the third president, Thomas Jefferson. In 1780 – 1783, at the tender age of 22-25 years old, he studied law as Thomas Jefferson‘s apprentice, eventually passing his exams and securing a job practicing law in Fredericksburg VA. However, in 1782 while in the midst of his studies, he was elected to the Virginia House of Delegates and took his career in politics from there (probably the right choice looking back on it).

- His presidential portrait was painted by someone much more well-known for something else - Does the name Samuel B. Morse ring a bell? It should. He's the guy who invented then  developed the electric telegraph, later palling up with his friend Alfred Vail to invent the Morse Code. (Bonus fact: he lived a solid chunk of his life in Poughkeepsie, New York where I grew up and we went on field trips and played with simple machines and stuff at his house which is now a museum. The more you know!) Before he was known as an inventor, Morse was a renowned painter and was actually the artist Monroe chose to do his presidential portrait for him (the one you can see at the top of this page).

- The only foreign capital in the world named after a U.S. President is named after him - The history of Liberia is…a tricky one. It was established by the American Colonization Society in 1821 during the Monroe administration, with the intent being making the country a destination for freed slaves (though still decades removed from the Civil War the early seeds of change had been planted and northern slaves were being freed). After a few failed attempts to establish settlements in Liberia, an agreement was signed in 1821 between the officers of the society and local African chiefs granting the society possession of Cape Mesurado to be used for this purpose. That entire story is fascinating an the result of decisions made during this time still linger today, but the main point here is establishing that the capital city of Liberia is Monrovia, and again, the only foreign capital named after a U.S. President.

James Monroe is not the most interesting man to have been president. James Monroe is probably not one of the 20 most interesting men to be president. With this being said, his little bit of history at the battle of Trenton, work under a much more famous man like Jefferson, and the fact that he was the goddamn president of the United States of America certainly means we deserve to know more about him than a few lines he delivered in his congressional address.