Like most people that don't work at HQ, I am very much out of the loop on many things Barstool unless there is a tweet about it or a full blown Emergency Press Conference. Surviving Barstool is definitely one of those things I didn't realize was happening until it was already happening and being talked about on the 9 million different forms of media Barstool is on.

I caught wind that it was happening at some point last week, but it wasn't until I saw this conversation on KFC Radio's YouTube page that I really started getting hyped for it.

Look, it's no secret that KFC is a born salesman. He has had me using promo code KFC on countless products that I had never heard of before they started advertising on Barstool and he has built an entire clothing line on his silver tongue that can sell ketchup popsicles to a lady with white gloves.

But after I saw that video, I texted him off the record about whether Surviving Barstool is really that good and this was his response. 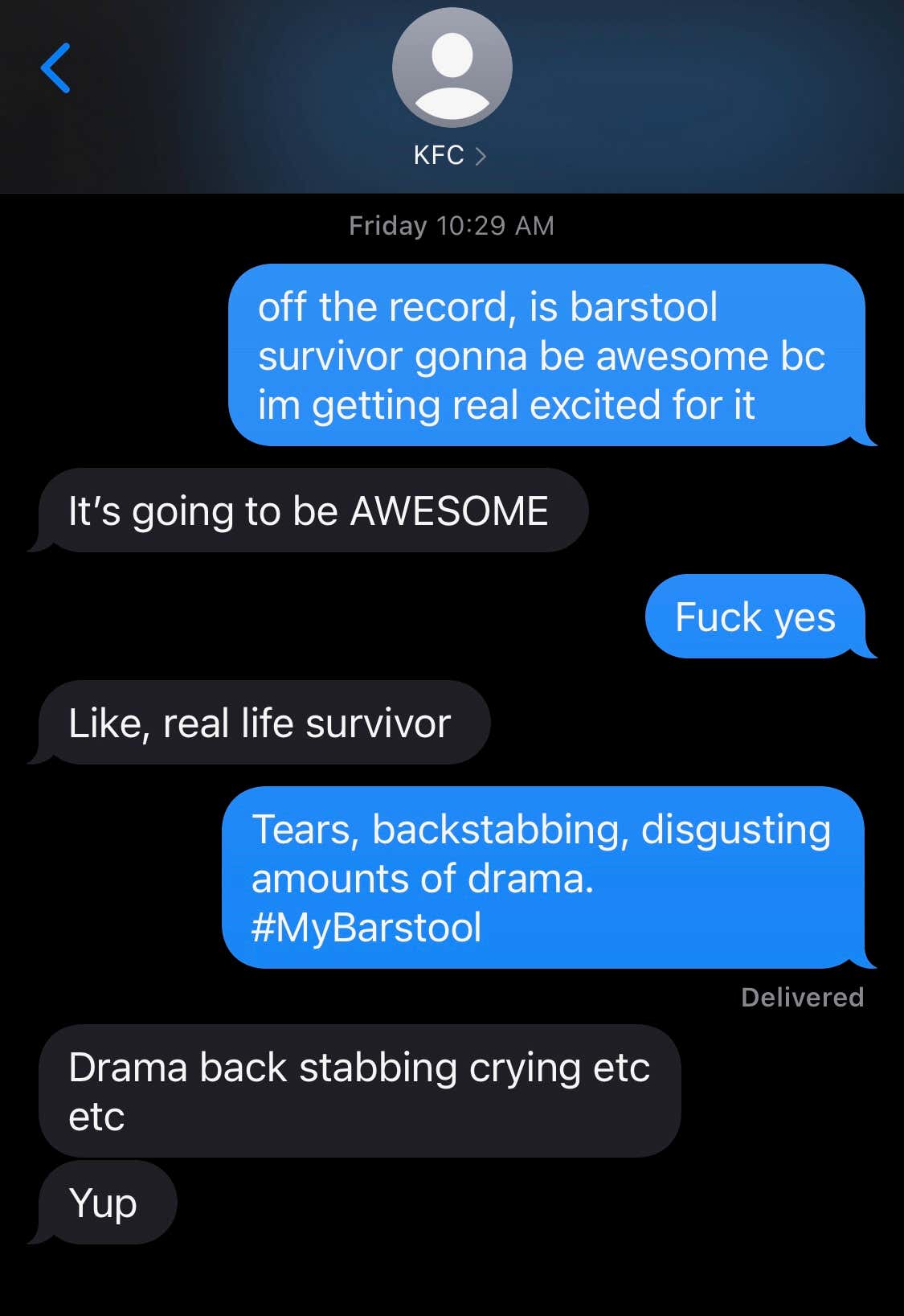 Sorry for putting an off the record text on the record, Kev. But the people should know that wasn't a lip service. I'm also not a journalist, so there is technically no record suckaaaaa.

I then got more of an inside look at the show on this week's Stool Scenes that only made me more excited about the chaos that's about to unfold over the next week.

Living in that office is crazy enough. Not just because of the lunatics that work there during the day or the giant rodents that run wild during the night to feast on the leftovers those disre2pectful lunatics left out to eat. But because staying cooped up in a place will drive anybody crazy. As someone that spent a few nights sleeping at HQ2 instead of taking a midnight train back North of The Wall, simply looking at this scene made my brain and body hurt.

And in case you were wondering if the challenges get a little crazy outside of the eating competition that caused two floors to evacuate due to an awful smell, I would say WATER BOARDING will ensure the #NotMyBarstool crowd doesn't chirp.

You want forms of torture that have been outlawed by peace accords, you are going to get it. You want drama, you are going to get it. Not only in the show but almost definitely in the months to come since these people don't go back to living their own separate lives in different parts of the world. They will be at the same company, under the same roof, in a place that can be a drama powderkeg without a reality show lighting the fuse. Somewhere on South Beach, I know Portnoy is smiling because an office full of agitated Barstool employees going at each others' throats is exactly what he dreamed of when he brought his merry band of misfits to this overcrowded city.

We have a wiiiiide array of Barstool personalities that are going to check all the boxes of the reality show contestant spectrum, we have super talented producers and editors who do such great work that I cannot legitimately believe they are coworkers with my dumb ass, and we have a sponsor in New Amsterdam that lets us do pretty much whatever we want when it comes to content.

I am stoked not only for tonight and every night this week but for every Super Bowl week for the foreseeable future instead of going over the same tired football stories for the 2nd week straight. Barstool has long been a crazy ass reality show, so I guess it was only a matter of time until we made an actual show capturing everything. The prize money will inevitably go up, which will also turn up the backstabbing as well as as the drama. And if/when we can start putting odds like these at the Barstool Sportsbook, that's when shit is really gonna pop off.