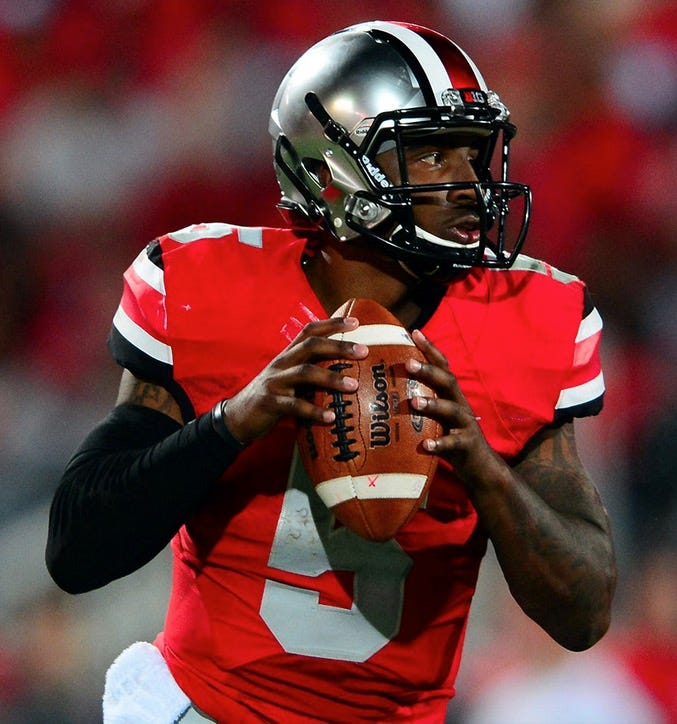 ESPN - Ohio State senior Braxton Miller has bowed out of the Buckeyes’ three-man quarterback competition and plans to focus on playing wide receiver in his final season of eligibility, he told Sports Illustrated on Thursday.

Miller said he started preparing to play wide receiver this spring in case he wasn’t healthy enough to compete at quarterback after suffering a pair of shoulder injuries. He missed all of the 2014 season after undergoing shoulder surgery last August. Miller watched film of receivers such as DeVier Posey, Antonio Brown, Odell Beckham Jr. and Cris Carter with coach Urban Meyer and sneaked into the practice facility late at night to run routes with fellow quarterback J.T. Barrett during May and June.

The most interesting position battle in college football received some clarity Thursday. Braxton Miller’s decision to transition from quarterback to receiver is the right decision for him and the Buckeyes.

“For the most part, it’s going to be H-Back and punt return,” Miller told SI. “It’s a long process to get back totally to throwing and throwing every day. This is the smarter thing for right now. God blessed me with a lot of talent and different opportunities. I’m going to have fun with that and still score a lot of touchdowns and help the team out and be dominant at that.”

Annnd one of the most intriguing QB competitions in college football history is down to 2. Big story out of Columbus last night with the news breaking that Braxton Miller is switching to wide receiver/H-back and punt returner. Pretty crazy, to think that a guy that was THE star QB1 of Ohio State – who has a 28-8 record and 52 passing TDs, threw for 5292 yards in 3 seasons, who finished in the top 10 of Heisman voting in 2012 and 2013 – just up and dipped out of the QB competition to be a wide receiver. You usually see that when a guy realizes he doesn’t have a shot in the NFL and needs to either switch positions or go undrafted, not so much a superstar quarterback preparing for his final season for the returning champs.

Thing is though, that when you combine the injury concerns with the shoulder with the fact that not only one, but two guys stepped up last year and showed they can be Heisman caliber quarterbacks that lead their team to a National Championship, the decision becomes a little easier. Especially when you’re actually excited about playing WR in the first place and are “downright giddy” about returning punts.

Miller sounded giddiest on the phone when he talked about the opportunity to return punts, something he hasn’t done since middle school. (His high school coach didn’t want to risk injury.) He said he’s studied Tavon Austin and Devin Hester to pick up the nuances of their return games. Smith, who is in charge of OSU’s punt return, said he has pondered using both Miller and Jalin Marshall, who finished No. 9 in the country in punt return average last season (11.8), in tandem on punt returns. Miller is excited for the new role. “That’s fun, too, man,” Miller said. “Be confident catching the ball, make sure your surroundings are perfect. Make one guy miss and you’re gone.”

And don’t forget this fact:

“I know who I am as a person. I know who I am as an athlete,” Miller said. “As it stands right now, I know I am the best athlete in college football. If any competition wants to come my way, I’ve just got to be smart about things and just stay looking forward.”

Should be exciting as hell to see some of this off the pitch or on bubble screens.

A 6’2″ 215 athletic beast who has a 4.3 40, knows coverages and pass concepts, knows the playbook backwards and forwards – Ohio State just got that much scarier.