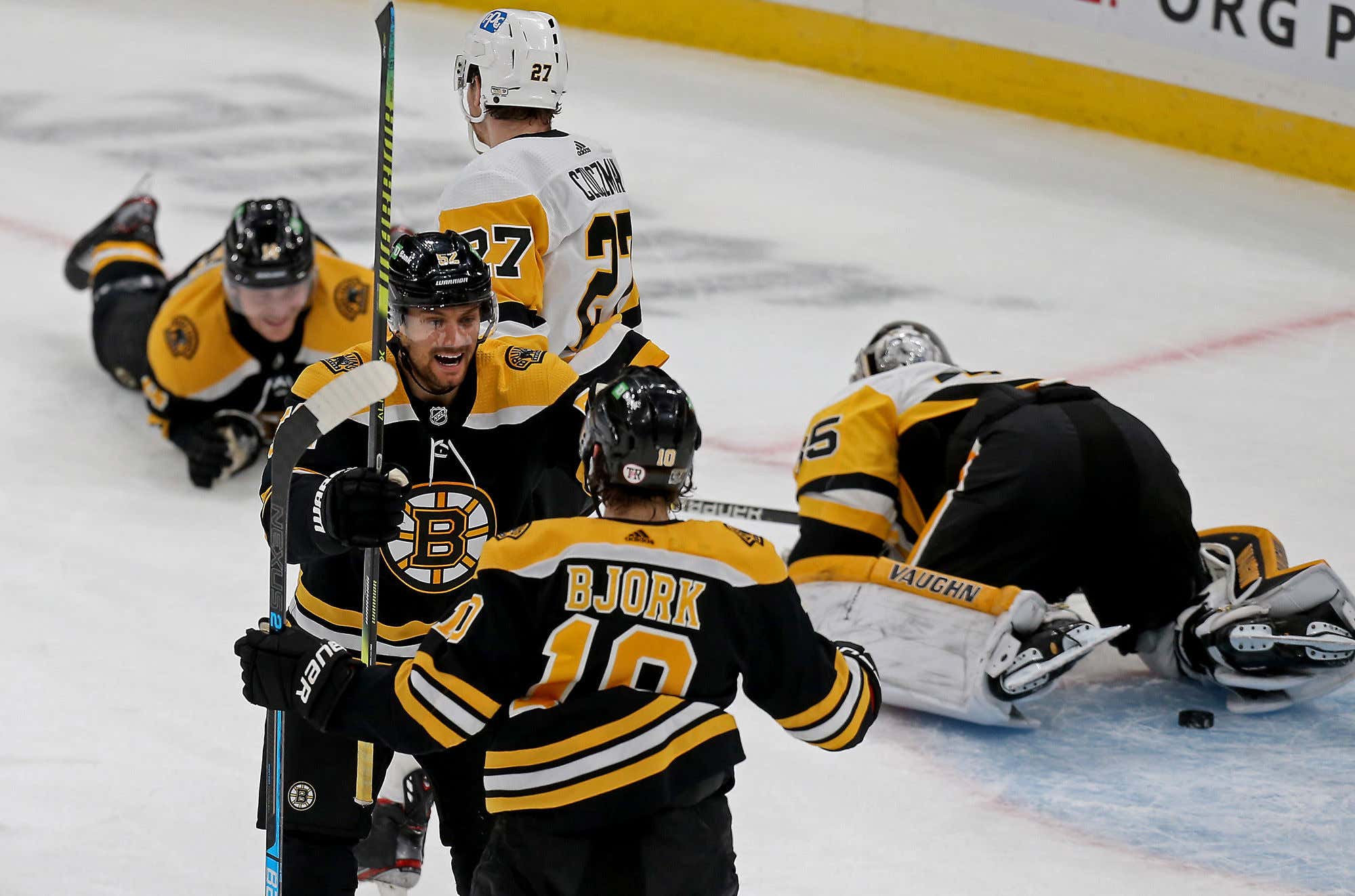 Thanks to a strong shift from the fourth line, Chris Wagner opened the scoring with his 1st goal of the year. The Mayor. 1-0 Bruins.

The Penguins bounced back with a goal of their own. I think the Bruins should be relegated to the AHL for allowing Cody Ceci to score on them. Kevan Miller's controller turned off. 1-1.

Sean Kuraly regained the lead for the Bruins late in the 3rd but it was all Anders Bjork's doing. What a shift from him. 2-1 Bruins after 1.

Early in the 2nd Patrice Bergeron cleaned up a Matt Grzelcyk pass with a backhander past Jarry. Bergeron's been on fire with 3 goals, 2 assists in the last 4 games. 3-1 Bruins.

Early in the 3rd Patrice Bergeron scored his 2nd of the night, an absolute bullet on the PP. Make it 4 goals and 2 assists in the last 4 games. 4-1 Bruins.

With Jake DeBrusk's injury Bruce Cassidy put the lines in a blender. Par Lindholm made his season debut centering Frederic and Studnicka. Craig Smith slid up to play with Bergeron and Marchand and Coyle flanked Krejci's right wing.

- Matt Grzelcyk returned to the lineup tonight after missing the last 2, but did not finish the game. We didn't see him in the 3rd. Hopefully he didn't re-aggravate anything.

- Boy did the 4th line show up tonight. Probably saw how much credit the 3rd line has been getting. Chris Wagner with the opening goal. Anders Bjork (with by far his best game of the season) chipping in with an assist (puck went off Kuraly). By far the best line on the ice tonight. Bjork was the best player on the ice.

- Craig Smith extended his point streak to 4 games. He got a nice look on the 1st line tonight. With David Pastrnak (hopefully) returning Saturday vs. WASH I expect him to reunite with Coyle.

- Charlie McAvoy took over PP1 in the 3rd with Grzelcyk out. Picked up a point on Bergeron's PPG. He's been outstanding these last few games. Just does everything so fucking well.

- Tuukka Rask was not available to back up. He tweaked something in the game on Tuesday night but he should be good to go Saturday vs. the Capitals (fingers crossed). Not a ton of pressure from the Pens, Jaro Halak finished the night making 16 of 17 saves.

(I am not liable for this headline if the B's lose in the future, just trying to spice up my headlines)

Sending my thoughts and prayers out to AJ Quetta who suffered a spinal cord injury in his high school hockey game a few days ago. The Bruins have pledged $100,000 to support AJ and his recovery. The Bruins will also auction off warm up used sticks with green and yellow tape used before tonight's game. A few Penguins players sticks will be available as well, including Sidney Crosby's.

If you have the means please consider donating to his Go Fund Me here.

B's are back at it Saturday night, first time they'll play Zdeno Chara and the Washington Capitals this season. Should be interesting. (I was not prepared to see him score his first goal as a Capital tonight).

David Pastrnak should be making his season debut….