AC – “As President, you would change your tone?”

Hmmmm, I don’t know why but I believe him yo. Let Don have his fun now, burn bridges with every country, politician, and media member in the world because at the end of the day if you elect him he’ll be totally chill and not a crazy person. All that shit he said about Mexico? That was candidate Trump not President Trump. I like that. It’s sort of like weekend you vs weekday you. Weekend you eats whatever the fuck he wants, weekday you “diet starts monday”. Weekend you gets drunk and is an asshole, weekday you is totally going to have this be the week where you get your life together.  Weekend you lives in filth, sleeps in, and does whatever he wants, Weekday you is gonna shape up and start acting like an adult and be responsible. Now is the whole weekend/weekday you just a way to justify being a mess of a human being? Always telling yourself that you’re about to clean your shit up? Of course, but everyone has that split, and if you don’t you’re either a liar or an overachieving asshole. So I’m into this. I get exactly what Trump is saying, just get me to next Monday and it’s a new Big Cat, you won’t even believe how professional that future guy is, totally different person. Just get Trump in the White House and he’s going to be normal and Presidential. I think this is actually the most human moment Trump has had in his entire Presidential campaign and he had no idea he was even doing it. Every other candidate tries to be someone they’re not from the word go, Trump on the other hand is making false promises that we’ve all done a million trillion times. Diet/Acting like an adult starts Monday/When we get to the White House, until then, party city. I’m in.

PS
I hope White House Trump can stop doing interviews in malls. That would be nice. 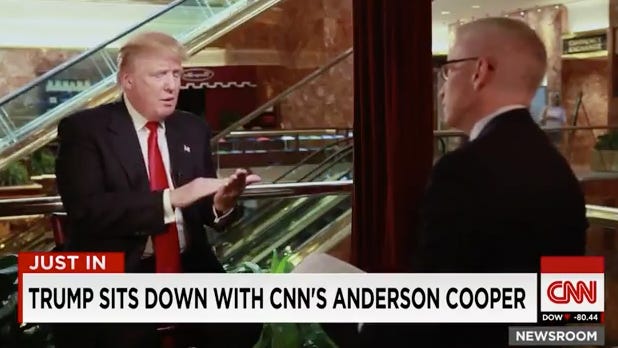