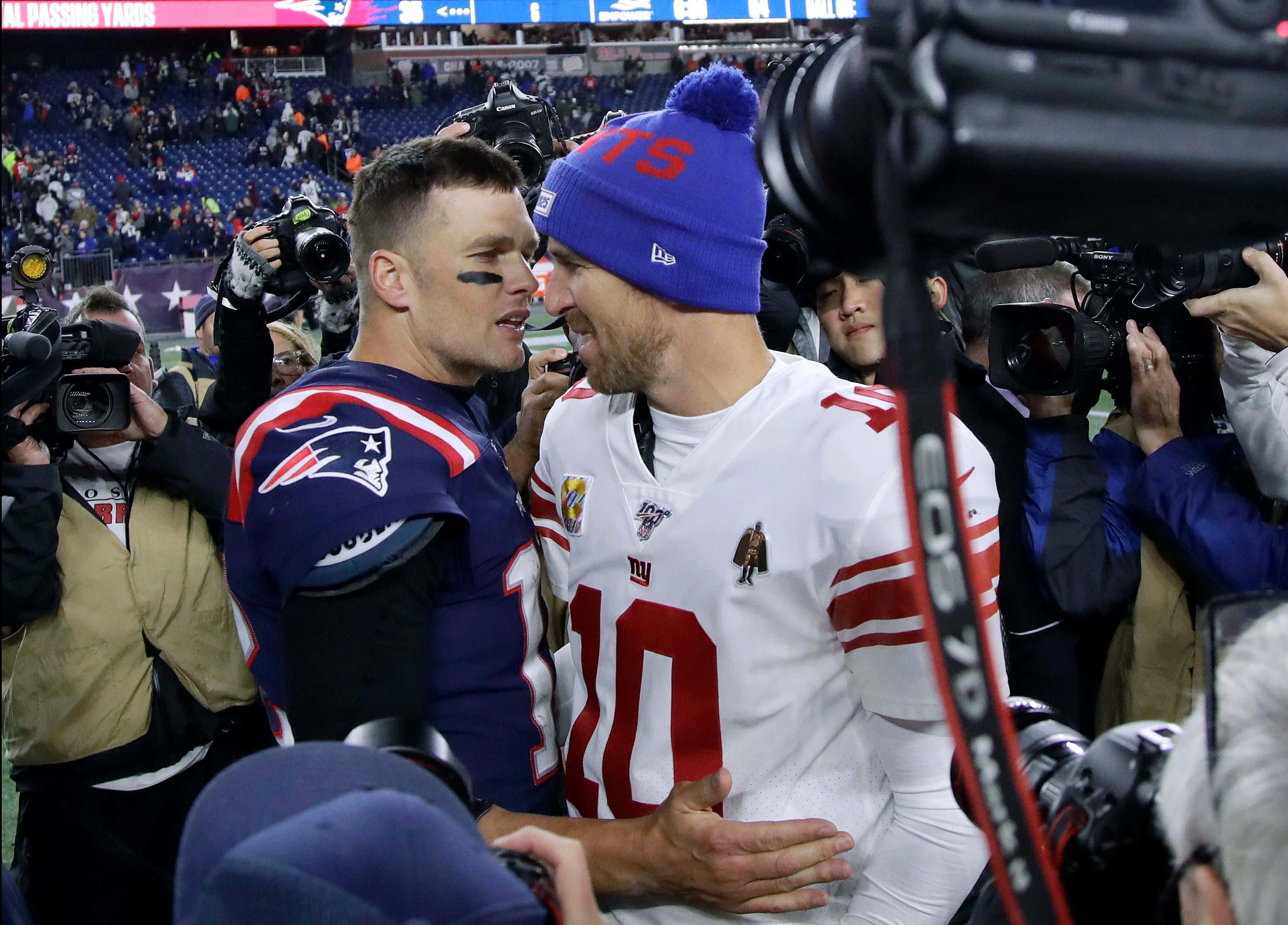 NY Post - He never brings it up. But that does not mean it does not come up in conversation.

Eli Manning is the only quarterback alive who has this over Tom Brady — the seemingly ageless wonder who is headed to his 10th Super Bowl, his first with the Buccaneers. Brady is 6-3 in his previous Super Bowl appearances, all with the Patriots, and the first two losses came at the hands of Manning and the Giants.

With so much (deserved) discussion this week about Brady, 43, as the best to ever do it, Manning will forever be 2-0 against him on the biggest stage.

“It’s one of those things, it’s not something I ever say or ever think a lot about,’’ Manning told The Post on Tuesday. “I’ve been around Tom numerous times, and I’ve never brought up a Super Bowl or our games versus them. He actually brings it up. It still bothers him a little bit, especially the ’07 one when they had the chance to go down as the greatest team of all time.

“But I don’t have any bragging rights with Tom. This is his 10th Super Bowl, and I’m so impressed with his whole career.’’

Just when I - and I think I speak for a fair percentage of other Massholes - was just starting to wrap my heart around the idea of Tom Brady winning his seventh ring in some seedy, run down, podunk berg of strip malls and strip clubs in America's Wang, the runt of the Manning litter has to casually drop in to remind us of the worst parts of 20 years of triumph.

But not just chime in and remind us of this. Treat us like imbeciles by pretending that it's not what he's doing. "What's that you asked? The two what I beat Brady in? Su-super Bowls? What Super Bowls? Oh, right. Those Super Bowls. I hadn't thought about them in a while. But you know who always brings them up? Tom Brady. He always brings up the two times I beat him in those two Super Bowls. Meaning the ones I beat him in. … " He probably was holding the MVP trophies up in front of the Zoom call when he said it.

Here's an idea. It's just crazy enough to work. If you want to claim not to have bragging rights, don't brag. It's better to say nothing and be thought a bragger than to open one's mouth and remove all doubt. "Yeah, my very good friend that I have nothing to lord over often calls me and brings up that time he almost had a perfect season. Did you ask me about that? The time they were one drive away from being the greatest team of all time? No? Oh. Forget I mentioned it." Fuck me with a Lomardi wrapped in  a copyrighted 19-0 sweatshirt.

Am I saying Eli doesn't have the right to rub Brady's perfectly formed nose in those wins? Of course not. To the victors go the spoils. Throughout history no conqueror was worth fighting for if he didn't demand his/her vanquished foes pay tribute. All of New England has to bend the knee to this .500 quarterback and that's just the way it will be for all eternity. Even though, as I've pointed out before he is no Hall of Famer and only led the league in a category three times, and they were all interceptions. He has upper hand and always will. What's done can't be undone.

All I am saying is that this is no time for him to bring it up. This is Brady's moment. No one wants to hear from the high school baseball player in Springsteen's "Glory Days." Now is not the time for Eli to tell the story about the time he scored four touchdowns in a single game for Polk High. Dammit all.

But while we're on the subject, it's been 13 years. Thirteen. And I'm still not over the 18-1 game. I've told this story before but it bears repeating. I had taken the day after that game off from my day job for the sole purpose of spending the day on Barstool celebrating. Before I could even sit down to write a Knee Jerk, I decided to take the Irish Rose out to see a matinee. Because I figured at the very least, they're not going to interrupt a movie to show the David Tyree catch. We ended up seeing "Cloverfield." I guess because I was in the mood to see Manhattan get stomped into the ground. By the time I got back onto the Stool around midday, Dave and all the other writers were ending their posts with "P.S. I think Jerry is dead."

That weekend, Barstool had a Mardi Gra party in Boston. One in which the models were all wearing painted on shirts, like the SI Swimsuit models. One of the regular readers and I spent the better part of the night in the corner pounding beers, pouring out our souls to one another and generally wallowing in misery. Eventually the guy said, "You realize there are hot topless models all around us and we're not even noticing them?" We agreed we were incapable of enjoyment of any kind at that point. I wondered how long Super Bowl XLII would bother me. It still does. So shut up about it already, Manning.