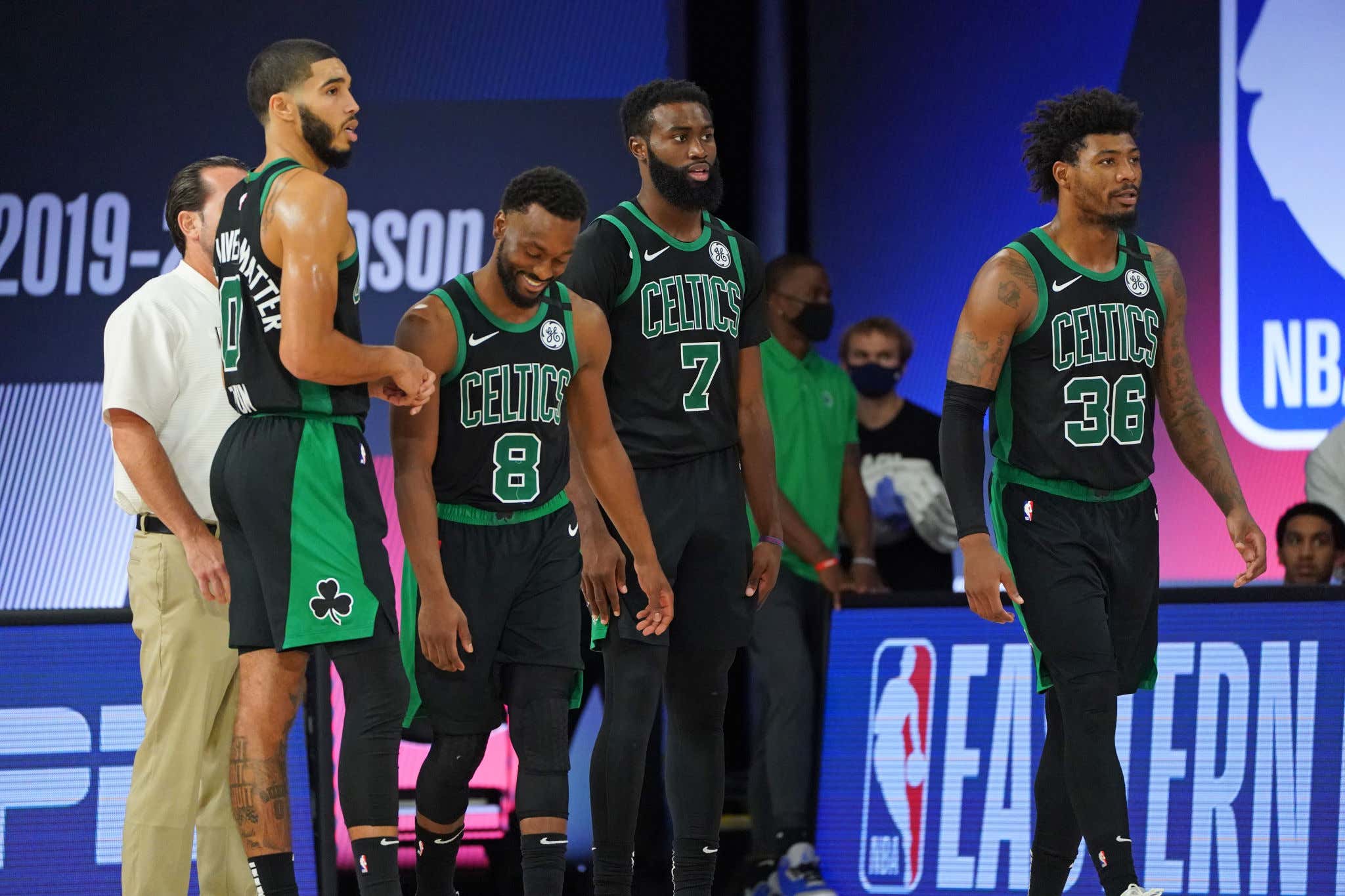 The day has finally arrived. A day we've all been waiting for since the bubble disaster. It sounds crazy that a team that's 10-6, second in the East and within a stone's throw of leading the conference has had a total of zero (0) minutes this season in which their top 4 guys all played in the same game. The idea of the Hospital Celtics went up a few levels to start this season and the results were mixed. But once the team released this injury report

It was all systems go. My guess is we're going to get Kemba/Smart/Jaylen/Tatum/Thompson to start tonight, and really if we're being honest with ourselves it should probably be Theis at the five. He's been playing out of his mind lately and for me, I'm all about comfort when it comes to these guys sharing minutes. How big of a deal is getting all of your main players back?

Just look at last season. When you look at the 5 man lineups from last year of this combination, here's what you see. They played 148 minutes together which was the 4th most of any lineup combination

Of the top 6 lineup combinations, this was the best defensive group that didn't include Gordon Hayward (95 Drtg). What does this team need to improve immediately this season? Their defense. I don't think it can be understated how not having the elite two way wings paired with an All NBA caliber point guard impacts this team defensively. Especially with the leap Tatum has taken these last few years. So that's exciting. I'm ready to see this team start to defend at a high level consistently again, just like they have whenever these four have played.

That's just the first thing though, here's a bunch of other shit I can't wait to see

This is the biggest question for me. With everyone back, how does that change what we are seeing from Jaylen Brown in terms of usage? You see, he's not really a #2 right now. He's a #1. Yeah I said it, the Celtics have two #1s, deal with it. I think we all understand he most likely won't be taking 28 FGA, and that's OK. I just don't want to see him have to take a backseat to the point where they aren't even passing him the ball and he's just standing in the corner. It did feel like that happened a little bit in Kemba's return and if there's one player who should not have a drastic drop in usage it's Jaylen.

If I'm being honest, this is what I'm most excited for. We get to see what these versions of the Jays and a healthy Kemba will look with proper spacing. If you thought the middle of the floor was open for Jaylen to thrive in the midrange before when it was just Tatum out there, well get ready. Teams can't clog the middle anymore now that there are three legit outside options (and maybe 4 if we get good Smart). This is going to open up everything. We've seen Kemba's burst look better than ever so I'm intrigued with how things will work now that defenses have more scorers to worry about. My guess is it's going to look fantastic

Speaking of Kemba, I don't really think he envisioned himself as being the 3rd option, but I also know that he loves the Jays like we do and loves seeing them thrive even more. The team is now in their hands, and Kemba's role has shifted a little bit. He's still extremely important to their success, but I see it as more the 3rd guy. You get the feeling that he doesn't care about his stats and just wants to win, but that might just be the optimistic side of me. He wants to show he's the same guy and he's never been a 3rd option at any point in his NBA life. Shit, he's barely been a #2 option. I'm really interested to see how he approaches this now more of a supporting role.

How do you solve the bench issues? You keep two of Smart/Kemba/Jaylen/Tatum on the floor at all times. We finally get to see what a second unit will look like while having our best players mixed in. That takes the pressure off the offense and may hopefully prevent scoring droughts, it ensures there won't be as massive of a drop off defensively, and it will open everything up for the role players. Aaron Nesmith can get way more open looks if defenses have to worry about Kemba/Tatum also being on the floor. I see it being a boost for everyone.

This is sneaky one of the biggest benefits of finally being mostly healthy. It slides Marcus Smart back into his best role, which is a facilitator. Just look at their last game. He took 6 shots and had 11 assists and they looked great. Now he doesn't have to worry about the scoring burden and can focus on the things that make him a value add. Play elite level defense and be a consistent playmaker. When they get that version of Smart, they win. It's when guys are out and the team needs his shooting/scoring that they tend to run into a little trouble.

I'm sure there will be some growing pains as guys get comfortable, but there's no denying this is a day we have all been waiting for. Pretty much every top contending team in the league has had their best players all season. The Celts were able to stay with those teams while barely having theirs. Now they do, and I cannot wait to see what it looks like.