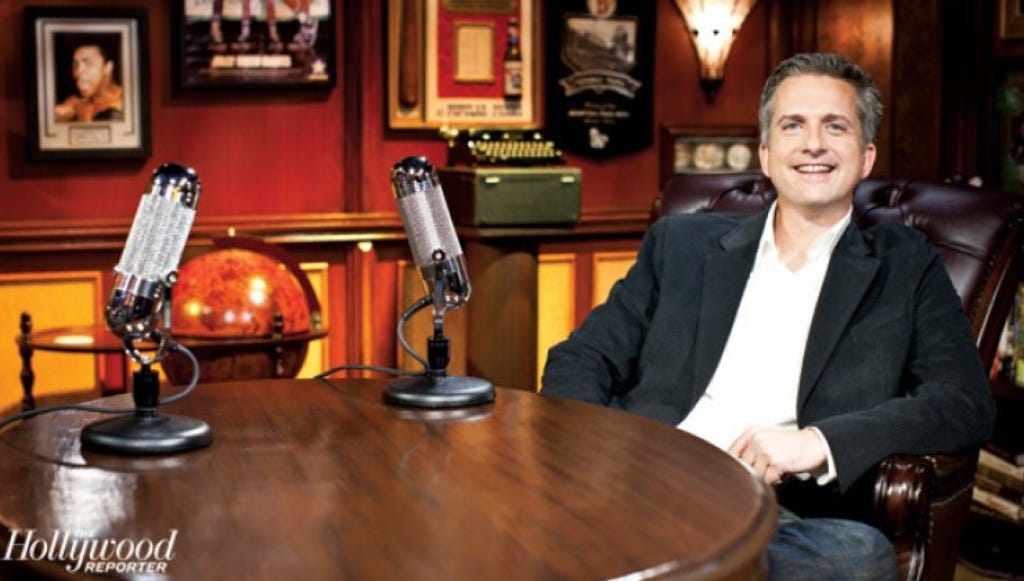 (Source) — As The Hollywood Reporter first reported in an HBO cover story in mid-June, the ESPN cast-off will make HBO his exclusive TV home. At the premium cable network, Simmons will launch his own talk show in 2016. The weekly show, which will air on HBO’s linear service as well as HBO Go and HBO Now, will be both topical and spontaneous, with stories and guests across the sports and cultural landscape. As part of the multi-year, multi-platform pact, which begins in October, Simmons will also have a production deal to produce content for the network and its digital platforms, delivering video, podcasts and features as he did at ESPN. Additionally, the long-time sports personality will consult for HBO Sports, working closely with HBO Sports president Ken Hershman on non-boxing-related programming, including the development of shows and documentary films for the network. “We have been fans of Bill Simmons and his work for a very long time. His intelligence, talent and insights are without precedent in the areas he covers. We could not be more thrilled for him to bring those talents to HBO and to become a signature voice at the network, spanning the sports and pop culture landscapes,” HBO programming president Michael Lombardo said in a statement Wednesday. Simmons added: “It’s no secret that HBO is the single best place for creative people in the entire media landscape. From the moment I started talking to Michael and Richard [Plepler, HBO chairman and CEO], it was hard to imagine being anywhere else.”

I know hating Bill Simmons is one of the internet, and certainly Barstool’s, favorite things but if you’re not excited for Simmons at HBO you’re a little dinky boy. He’s going to be awesome there. Simmons is Kanye West to the internet, everyone hates him so much that no one will ever admit that he’s insanely talented and instead they’ll just call him an asshole. Fact of the matter that the guy who created 30 for 30 having a production deal to produce documentaries at HBO is going to crush it. His weekly pop-culture show is going to be great, as it’s sounds like it’s pretty much The Rundown only with actual production and not filmed in a crack house. Simmons has lived with the ESPN muzzle on that he’s foaming at the mouth to start saying whatever he wants. As you can see with Ballers, HBO doesn’t bow to the feet of the NFL like the worldwide leader does. He doesn’t have to be scared to go after anyone, no execs are going to tell him to knock it off because HBO’s revenue doesn’t depend on any of them. Simmons has famously said he’ll “go public” and if there’s any place he’ll be free to do that, it’s HBO. So this move is awesome and is going to produce some quality, quality shows. Argue amongst yourselves if you disagree.