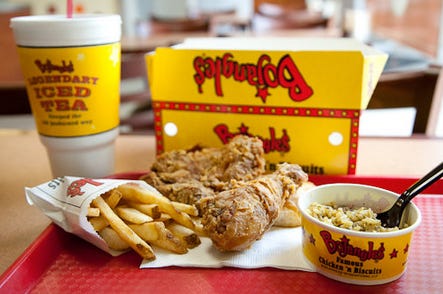 HuffPo - A Virginia man found and returned $4,500 that was mistakenly served to him inside a bag of fried chicken, but he has a beef with the way the restaurant treated him after he saved the day. James Minor went to a Bojangles’ restaurant in Henrico on Friday for some chicken, but said he was unhappy to find that it was cold. “I sent it back to the person who was working the window and I asked them to get some fresh chicken,” Minor told WTVR. “And they told me to pull up in the drive-thru and fresh chicken would be out in six or seven minutes.” When the new order arrived, Minor found himself one lucky duck. Instead of the chicken he ordered, there was $4,500 in cash and some deposit slips. Minor was shocked and went to speak to the manager immediately. He was even more shocked by the manager’s response. “The manager came and I said, ‘Can you please tell me as a customer why is this money in a Bojangles’ box? Whose money is it? And, is this a setup?’” Minor told ABC27.com. “And so the manager says, ‘If you would’ve drove off, we would’ve called the authorities on you.’” Minor returned the money and was offered a free meal by another manager, but the whole experience left a bad taste in his mouth, especially after he called a district manager who he says hung up on him, according to WTVR.  “I deserve respect, an apologetic letter from the Bojangles’ company and probably a cash reward,” he told WTVR. “What is a $100 gift certificate when you’re bringing in $4,500?”

Let’s break this down real quick because there’s a couple things that need to be touched on here:

1) Pretty much every fast food place is laundering drug money. You think Breaking Bad made that up out of thin air? No. The majority of fast food establishments are shuffling fried chicken out the front door while shuffling meth out the back.

2) If you find $4,500 cash in your chicken box, you have 2 options: 1) return it, or 2) drive away. Simple right? That’s why it’s hard to feel compassion for this guy who chose option 1. The second you return the money, you can’t expect shit from them. He can’t be like “what is $100 when you’re bringing in $4,500?” Well jabroni, nobody made you return the money. He can’t give it back, which he considered to be the right move, and then expect a huge cash reward for it.

3) Someone is about to die. Can you imagine if one of Gus Fring’s drug mules slipped up and gave a customer $4,500 cash and it made it to the media? Throats would be slit so quick. I have a feeling some bad, bad shit is about to go down in Henrico, Virginia fairly soon. Nobody is safe. Pray for Bojangles.

PS: I did a Top 5 fast food list way back in the day after Mo did a very Charlie Wisco-esque rankings without ever having had my number 1. Since that list came out, I have had both In n Out and Jack in the Box. Jack doesn’t make the top 5, but my new ranking is as follows:

Oh it’s true, It’s damn true. In-N-Out was everything it was supposed to be and more. Why don’t we have these on the East Coast? It’s blasphemy.

PS: I have a video of me eating In-N-Out for the first time ever. It’s kind of like Davey Pageview’s Nantucket Living videos but it’s me shoving a 3×3 animal style in my mouth. So yea, it’s pretty sexy.