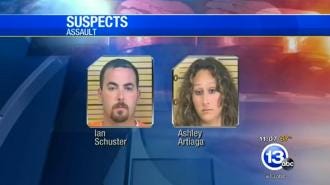 TSN – The rivalry between Ohio State and Michigan doesn’t just take place on and off the field. It also takes place on the open water. Two Michigan fans were arrested in Port Clinton, Ohio on Sunday morning after an argument about the heated rivalry lead to a brawl aboard the Jet Express ferry, according to 13ABC Action News.

“The fight between 25-year-old Ashley Artiaga, 31-year-old Ian Schuster, and complete strangers on the top deck allegedly began because of an argument over Michigan-Ohio State football.”

According to Todd Blumensaadt, the owner of the Jet Express, arguments like this are not out of the ordinary. “It happens,” Blumensaadt told 13ABC Action News. “They get very passionate about their teams. “We haul a lot of people, bring a lot of people together. This was like 1:42 a.m., so I’m guessing there may be a few drinks involved in this one.”

One of the other passengers on the boat, Gary Mahoney — a Michigan State fan — did not share Blumensaadt’s apathy. “You’ve got to know when to draw the line,” Mahoney told the news station. “Sports are good, but when it reaches that point, obviously it’s way overboard.”

If I’ve said it once I’ve said it 10 trillion times, this is what makes college sports the best. The passion. The rivalries. The die hard loyalty to your team, the fact that no matter what the situation, where you are, if somebody bad mouths your boys, you square up and defend their honor. On land or at sea, you hear somebody talkin’ shit, you yank their hair right out of their god damn skull then punch their husband in his stupid face. That’s just College Football Life. And when you consider this is Michigan-Ohio State we’re talking about? THE premier rivalry? Harbormaster should consider himself lucky he wasn’t dragging bodies out of that water all morning.

PS – I see you Gary Mahoney with your boat puns.