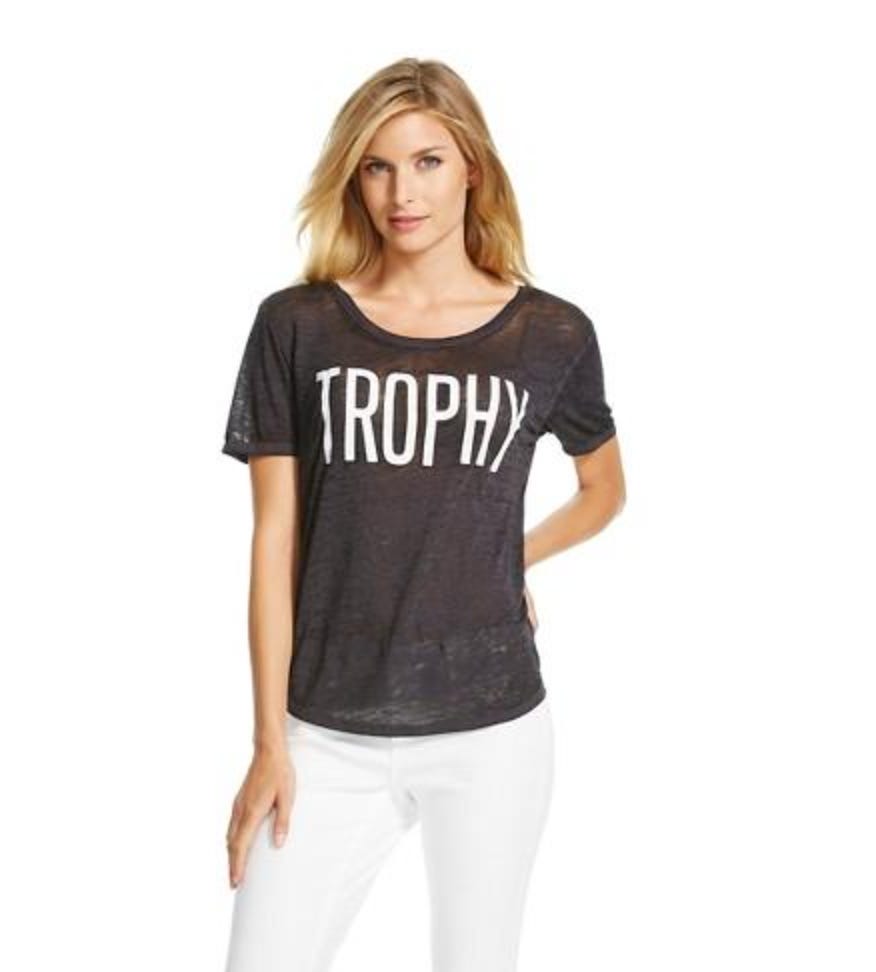 (Source) — A T-shirt being sold at Target’s stores and on its website has sparked a backlash online, as many customers are claiming the top is offensive to women. The black shirt, which has the word “trophy” in bold white letters across the front and costs $12.99, has many slamming the retailer for treating women and girls as objects. While the shirt has reportedly been on sale since June, it’s only recently gained steam on social media. “Dear Target, why are you selling shirts that describe women as obtainable objects such as trophies?” wrote one user on Target’s Facebook page. “It’s honestly appalling. I’m nobody’s trophy, and I sincerely hope that in your eyes, women are more than something to be won.” Plenty of women echoed those sentiments. “Losing outdated, ridiculous attitudes toward women could be helped if everyone, Target included, chose to stop marketing to women as though they were objects. When was the last time you saw a men’s shirt that said ‘provider’ across the chest? Let’s all do what we can to lose the stereotypes,” wrote one Facebook user. And in a tweet accompanying a photo of the shirt on display, one user added “@Target under what circumstances should any human being wear a T-shirt that indicates that they are a ‘trophy’?” One woman has even started a petition on Change.org demanding that Target stop selling the shirt. “The truth is that millions of women and young girls are taken as ‘trophies’ every year in war, sex trafficking, slavery, and rape,” writes Amanda R., the author of the petition. “The perpetrators see women as ‘things’ that are bought, sold, traded, and ‘won’ through force where they are then beaten, abused, tortured, raped, and murdered for the sole purpose of ‘victory.’ The word trophy should not refer to any person, man, or woman because we are not THINGS — we are human beings. Labeling any person as a ‘Trophy’ is demeaning their humanity and objectifying them as a tangible object that can be bought, used, and disposed of.” The petition, which was posted online in June, has received more than 700 signatures so far.

Come onnnnnn. I really don’t even enjoy blogging about this stuff anymore because it’s always so dumb, but this one is especially crazy to me. Why must this shirt be taken down? Feminists like this are so fucking insane. Like you guys understand you’re dictating what women can wear and what they can’t right? You know who else does that right? You want girls to wear burkas or do you feminists want to let them make their own decisions? Because no men are buying this shirt, taking it home and stapling it to their wife’s tits. Maybe there are some trophy wives/fiancees/hot chicks with a sense of humor? Maybe some women see this and laugh and think, “This would be sooooo funny to wear when I drink wine and take Xanax at noon on a Wednesday with Jackie and Hillary tomorrow.” Point is you can’t claim to be a feminist then decide what women can wear or find funny. There are no laws forcing women to buy this. There are CERTAINLY no people who see the word “Trophy” and think Oh I bet this is what sex traffickers make their captured girls wear when they sell them to a Saudi prince. I fucking hate those tshirts that say “The Man” with an arrow pointing to a guy’s face and “The Legend” with an arrow pointing to his dick, but as an advocate for men’s rights I let those idiots make their own choice. Give that a shot.