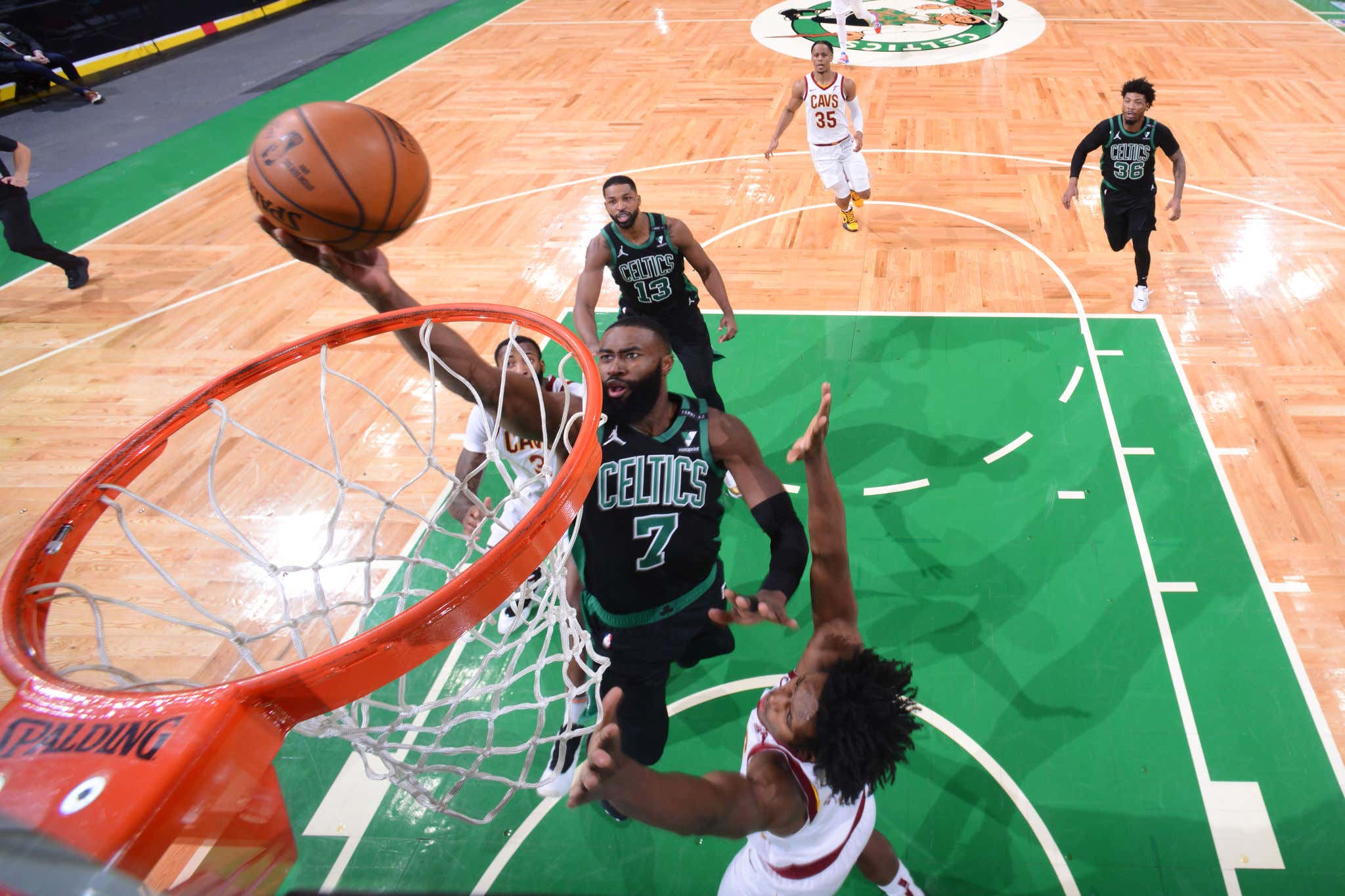 It's not often that we as fans get to experience a stress free evening of watching the Boston Celtics play basketball. In fact, I can't remember the last time it happened. It's pretty wild that it came against one of the hotter teams in the league at the moment, a team that had the #2 ranked defense in the entire NBA and just came off back to back wins against the new Nets superteam. I was fully prepared for extremely stressful two plus hours, and I have to admit this was waaaaaay better. It won't happen often so I want to make sure everyone appreciates this moment. Basically a wire to wire win with the largest lead ballooning to 41 all without your best offensive player is pretty cool, but personally I was more pleased with how we saw this team defend and the energy in which they played with through a full four quaters.

If you watch this team a lot, it's so easy to see when they are engaged and when they are just mailing it in. Everything with this team always comes down to effort. When they bring the right energy and effort on both ends, shit like this happens. When they don't, well just look at their previous 3 game skid. You cannot tell me that the effort and energy in those three games compared to last night is the same team. Let's be honest too, they needed this win. They were on the verge of having a little mini spiral and shit is too close in the East to have 4 or 5 game losing streaks.

Thankfully, they didn't. Oh and this Jayson Tatum fella is coming back tonight. I hear he's pretty good. But before we worry about how he'll look tonight, we first have to relive what was one of the best performances of the entire season.

- Year after year there were always a group of Celtics fans that were mad at Danny Ainge for not trading Jaylen Brown. Whether it was for Paul George, Jimmy Butler, Kawhi for one season, people loved to roast Danny Ainge for holding onto his prized asset. Well let me ask you something. Would you trade Jaylen, at age 24, for any of those guys right now?

This version of Jaylen is the exact reason why Danny Ainge never did. You know, the one who isn't even 25, is 7th in the NBA in scoring and is currently playing at an All NBA level

33 points in 19 minutes. How many of those previously mentioned players have ever done that? Oh, it's none of them? OK, well surely it's happened before in the shot clock era, right? Oh, wait, it hasn't?

Nothing gets my blood pumping like watching someone on my favorite team make a little NBA history. It's not just the scoring this season from Jaylen which has been tremendous, it's the efficiency that takes it to another level. Another 13-20 (3-4) last night, we're now up to 27.3/5.8/3.5 on 53/43% shooting with 2.7 3PM a night.

Jaylen talked about how he was going to do more after dropping 42 against the Sixers and a loss, and the man backed it up. There's just nothing defenses can do against Jaylen this year. He torched Ben Simmons in their matchup, and now here comes a team that's defending better than almost any team in the league right now and it made no difference whatsoever to Jaylen. He's taken on this huge offensive role this year and actually improved his shooting percentages. Last night it was everything from scoring in transition, to thriving in the midrange, to killing the Cavs with threes.

We are seeing the development of Jaylen Brown that is going to get him into the George/Butler/Kawhi class sooner rather than later if he's not already there. Again, he's 24 years old. We're basically a quarter of the way through the season, this is not a small sample size. This is who Jaylen is, and it's what Ainge and the rest of us were hoping he'd blossom into.

- I don't want to sound like a broken record, but Kemba looks so fucking good. I see this Kemba compared to the version in the bubble after the Sixers series and I don't even recognize him. His burst is beyond back and now his shooting touch is following suit. Things simply feel so much more comfortable on both ends with Kemba in the mix

If, and it's a big if, but if this is the Kemba we get all year and in the playoffs, it drastically changes the Celtics ceiling. It just does. He's the wild card for everything. The lift on his jumper looks great, you can tell he's starting to feel like himself again not just because of his splits (7-12, 3-5), but the types of shots he's taking. He's finishing at the rim over bigs like Drummond because he's too quick. He's comfortable taking his pull up threes off the high screen.

Better yet, he also didn't turn the ball over. I'd say this was about as close to a perfect Kemba performance as we've had all year.

- When Marcus Smart plays within himself and doesn't force things, he is such a joy to watch. When he puts his effort into creating for others first and then scoring second, it makes all the difference in the world. That is what we got in this game

Not once did I feel like Smart was forcing the issue. Not once did I feel like he was out of control. He finished with 12 points, 9 assists and 5 steals on just 5-8 shooting and no turnovers. It was his defensive intensity that really set the tone and helped this team build their big lead. This is the version of Smart I want at all times and hopefully, we'll be able to get now that Tatum is back in the mix.

There's no denying he was a huge part of why they lost their last game in Philly. It was a disaster stretch for him in that fourth. But we also have to give him credit when he does his part to severely impact winning, and that's what last night was.

- It's not often we're going to see this team shoot 55/50% from the floor for an entire game so I will not take it for granted. Last night was one of those nights where shots dropped. We've lived through games where its been the exact opposite. Call me crazy but if I had to choose, I'd go with what we saw last night. Then I started to wonder if Brad maybe never told his players to go with the make all their shots strategy. Could be big moving forward.

- How about this bench!!! One of the better parts of the blowout was the fact that we got to see the bench guys play some legit minutes and boy of boy was it wonderful. First, there was Carsen. I think Carsen has a huge opportunity these next two weeks with Payton Pritchard out. There are point guard minutes to be had and if he plays like this

he deserves all of them. I'll never give up on Carsen. He's kinda short, but he's strong as fuck. His burst looked great last night and he actually starting knocking down shots. It's hard to know what any of these guys truly are because their opportunities are so few and far between. I'll say this though, he absolutely has shown enough to warrant being ahead of both Jeff Teague and Tremont Waters during this stretch. I really think there can be a role for him as long as he's consistent on defense and knocks down his open looks. He looks great.

- Then there's Aaron Nesmith. The latest lottery pick people can't stop calling a bust. Well idiots, maybe lets just see what he looks like when he gets real minutes. That happened last night and guess what. He looked good!

Easily his best showing of the season. It wasn't just the 3-5 from three either, I thought Nesmith was active as hell. It always feels like he's around the ball. He crashes the glass hard, and defensively I see a player getting better and better as he continues to learn the NBA game. People need to understand that not everyone is going to have to the same opportunity. Other lottery picks are getting 30 minutes a night. Nesmith basically can only play in blowouts because of how the roster is constructed. But there is a role for him. They need a player like him and his skillset and right now it's all about building confidence.

With a B2B tonight, I really want to see Nesmith get another solid 15-20 minutes. Lets see if he can build off what was his best game as a pro.

- In 12 minutes Jeff Teague gave this team 0 points, 1 rebound, 0 assists and 2 TOs. At this point it's truly shockign. How is he not able to give them anything positive? It's forcing Ainge to have to ask a really tough question. Does he cut bait and try and replace that position with the TPE? Does Pritchard's injury change things? I just don't get it. I spent years watching Jeff Teague destroy the Celtics. Even when he was old and on the Wolves! Now he can't even play basketball? What the shit is that.

All I want is an efficient 8-12 points a night. I don't fell like I'm asking for a lot here. I'm being realistic. But that line from last night? That shit was bad.

- I'm starting to wonder if the team promised Tristan Thompson a starting role in free agency and that's why he keeps getting the nod. If we are going to play two bigs, can we PLEASE see the Theis/Timelord pairing to start a game? You don't have to keep it that way, just let me see it. Once. At least in this game TT was much better on the boards (12), but offensively he continues to be a complete non factor, even missing these bunnie hook shots that I'm pretty sure Rob can make.

- I am making a new rule. When Tack is in the game, the offense goes through him. I don't need Tremont stepbacks when I have Tacko on the floor ready to dunk on someone's head. Only 1 shot in 8 minutes is inexcusable.

- Grant has had a reaaaaaallly tough like 4 game stretch. It feels like every time he's on the floor he either fouls, or commits a turnover. Last night in his 12 minutes he went 1-4 with 1 foul and 3 TOs. They are black hole turnovers too where he tries to do something offensively, gets swallowed up and then turns it over. Then he complains about a lack of a foul. I'm sorry Grant but refs aren't going to bail you out when you have nothing offensively. You're not at that level just yet.

The Celts really need Grant to snap ou of this because he does have the skillet to help, but right now it does not look good. Unplayable even.

What I want to see tonight is a team that doesn't take one step forward and two steps back. I also don't want to see them force things with Tatum. Let him get his legs under him. The defense is going to have to show up, Zach LaVine is playing out of his mind, and this Bulls team is not a push over. I get it's a B2B but all the starters played low minutes so I expect this team to show up and show some actual progress.