CBS – South Carolina coach Steve Spurrier went through the ESPN car wash on Tuesday, as have all the SEC coaches this week, and in the morning he joined Mike and Mike for a 10-minute radio spot. Spurrier spoke on the South Carolina quarterback competition and changes to the SEC since he started coaching. He also pumped up his star wide receiver Pharoh Cooper.

The conversation also turned to the topic of discipline for domestic violence cases, something that has unfortunately become a common talking point in college football. Spurrier has discussed this issue plenty of times, including at the 2015 SEC Media Days last week, so the hosts asked him about his zero tolerance rule for hitting girls.

“I have had that rule I think every year I’ve been at South Carolina, so 10 years, and we have lost two players,” said Spurrier. “I tell the team when they first arrive on campus, all the freshman know right now, if you ever hit a girl, punch a girl, whatever, you’re finished. You can go somewhere else, transfer somewhere else, but you’re not going to be on our team.

“That’s just a rule I have, a personal rule. Some other coaches don’t have it. They think they’ll give a guy a second chance, but we don’t have second chances for that.”

Then he threw in this line about marijuana usage before concluding his thoughts on domestic violence.

“You can smoke pot and get lectured on it — three pots and you’re finished — and we have our rules for all our other things,” he continued. “We haven’t had anything happen [with domestic violence] in about eight years now, so I think it’s a good rule and if you enforce it it’s really helpful.”

Man, it’s reaaalllyyy tough to not love Coach Spurrier. Like I’m not sure how the other SEC schools do it, having to pretend they hate his guts for the sake of traditions and rivalries and stuff. Has to eat them up inside knowing they’re just faking it and can’t just throw their hands up and bow down to the crazy old shirtless bastard in the Ray Bans and visor.

The Spurrier Way: You hit a woman and you’re gone, no question. You get caught smoking some weed you get a little lecture, maybe you do a few extra reps in practice, an extra suicide at the end of sprints. Three chances until you’re gone. I mean that’s the way it should be. That’s just common sense. One is wrong on every level, one is a completely harmless drug that’s practically legal now. And if you’re dumb enough to get caught 3 times then you’re too stupid to be on the team any way and we’ll see ya later. Weeds out the brain dead morons, no pun intended, but intended. 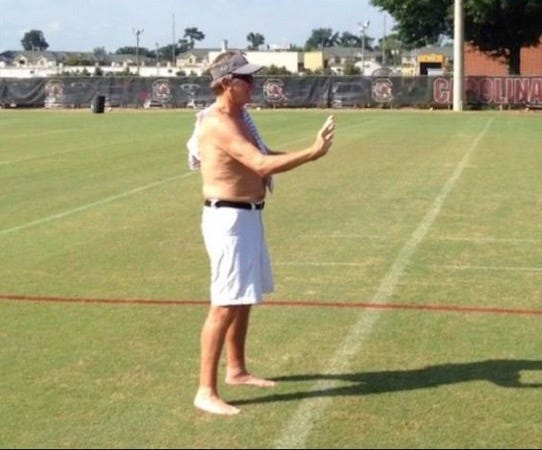