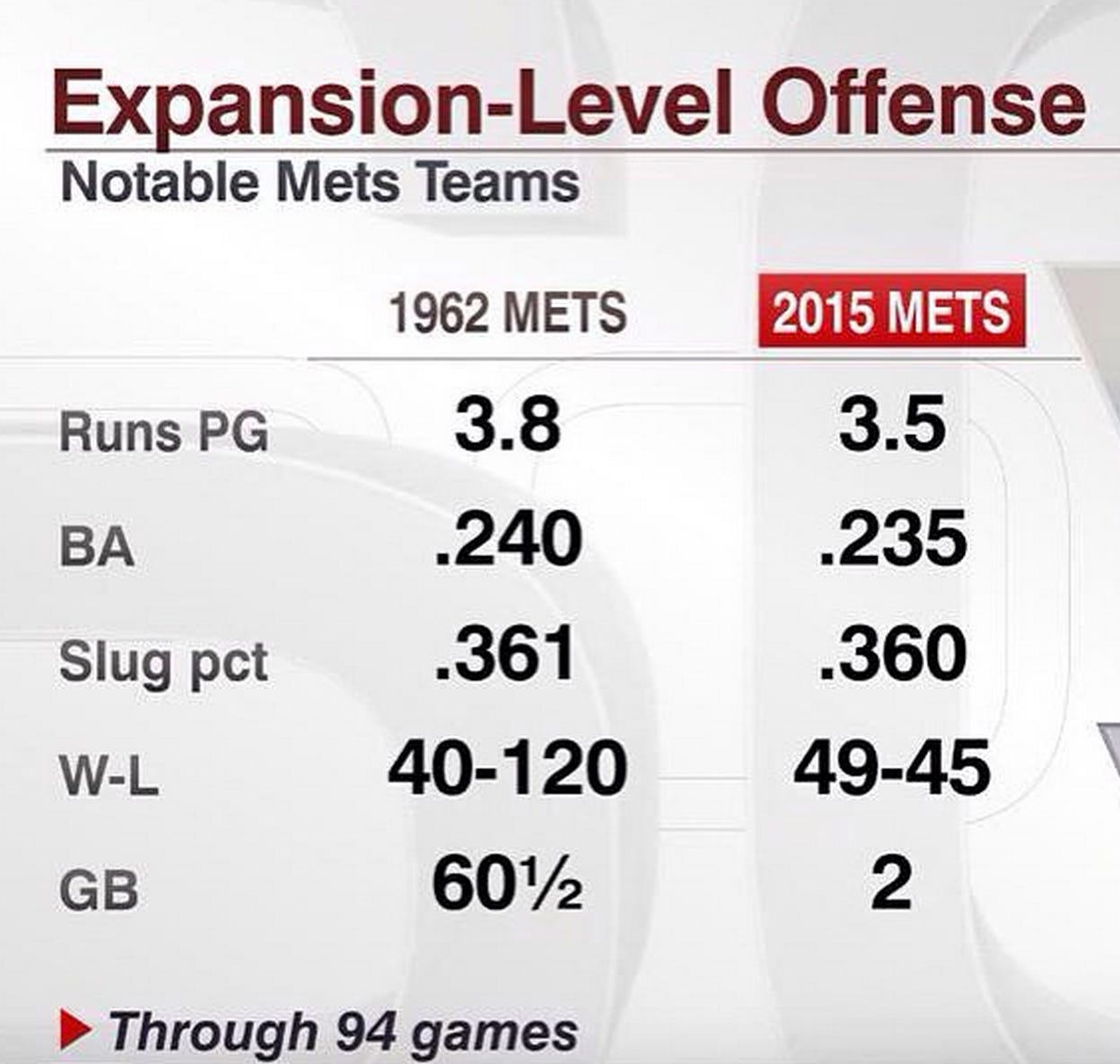 Now obviously the Nationals dealing with a lot of injuries has a lot to do with only being 2 games out. And the Braves, Marlins and Phillies all sucking helps with their division standings as well. But this graphic right here shows 2 things:

1) The Mets pitching is EXCEPTIONAL. It is next level good. And not just their starters. Familia as the closer is right up there as the MVP of this team at the moment making sure all these 1-0, 2-1, 3-2 games are wins. Every. Single. Night. you’re facing very high quality pitching. And even when Big Sexy doesnt have his best stuff its a weird stat line where he scatters like 10 hits and somehow only gives up 3 runs.

2) Its absolutely embarrassing that a big market team in New York can have an offense this bad. The 1962 Mutts are quite literally one of the worst teams in baseball history. Only the 1916 Philadelphia Athletics (36-117) and the 1935 Boston Braves (38-115) were worse than the expansion Mets. And here we are in 2015. The New York Mets are worth over a billion dollars. They have the 3rd highest regional TV ratings in all of baseball with SNY. Yet they are trotting out a historically bad offense. I just dont understand how that is allowed. Like I dont know all the parameters for making an owner sell a franchise, but the Wilpons really should not be allowed to own a team. I know the McCourt divorce had a lot to do with the Dodgers situation. But a big market franchise putting out a lineup thats worse than an expansion team from the 60s is downright criminal. I guess as long as they are in contention though, thats all that matters. Could potentially be one game out if they win today. How can you knock them if they’re only 1 game out, right? But theres just no way the Wilpons should be in control of a franchise. If this was some sort of grand plan based on the end of steroids and this dead ball era and offense not mattering and bolstering the pitching, I guess I could understand. But this is strictly because of money issues. The only thing holding this team back from legitimately being a 100 win team is offense and the Wilpons refuse to address it.

Anyway this team’s offense has been so bad I came up with a little Real Or Fake game with Mets offensive stats.

The stats that have been rolling out on twitter and during Mets broadcasts have been absolutely surreal. To the point that the beat writers and the broadcasters could say almost anything and I’d believe them. Like those Tony Gwynn and Greg Maddux stats from last year. So I took it upon myself to do just that. See if you can decipher which of these pathetic stats about the Mets offense are real vs ones that I just made up.

Steven Matz had 4 RBI in his debut 18 games ago. Since then no Mets player has more than his 5 RBIs Harvey has 4. Cuddyer 2, Murphy 2, Mayberry 0

Mets middle infielders have had more errors than RBI in the month of July.

Bryce Harper hit 13 home runs in the month of May. The Mets as a team hit 11 that same month.

Before last nights game, the Mets were 4-for-72 with runners in scoring position the previous 9 games

The last time Kevin Plawecki hit a home run, David Wright was still in the lineup

Mets pinch hitters are 1 for their last 43

Mets hitters have more strike outs than their pitchers

Wilmer Flores is going to the Hall Of Fame

J.D. Martinez has 10 homers with runners in scoring position this year. The Mets have 9

No Mets player has 40 RBI

(Scroll down for answers)

(NOTE: I wrote this yesterday and it didnt get published so I updated to include yesterdays offensive EXPLOSION! but some figures might be off)