I admittedly use the word awesome a little too much since the definition of it is "extremely impressive or daunting; inspiring great admiration, apprehension, or fear". But that video is fucking awesome, which is pretty much par for the course every time one of those bell ringing videos of a Bills Mafia video graces one of my screens.

It's no secret that a cancer diagnosis followed by the requisite chemotherapy is an absolute battle both mentally and physically. But you cannot find a place that fuckhead cancer could choose to go worse than Buffalo, which is filled to the brim with hard-nosed, blue collar people that prove their resiliency every football season.

So seeing Victor put on his Buffalo Sunday Best from head-to-toe then promptly put himself through a table and stick his victory right in cancer's eyeball was as on brand for Bills Mafia as it gets. Exciting. Entertaining. And fucking awesome. 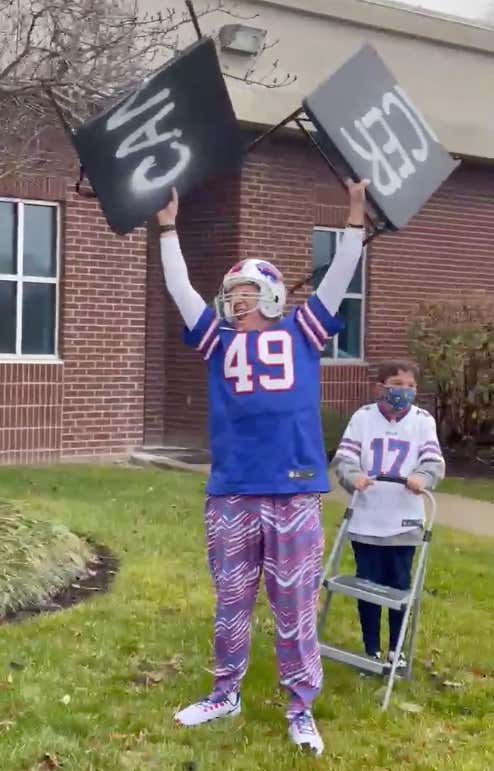 You can root for the Chiefs on Sunday if you are a Chiefs fan or have some cash on them. But if you aren't pulling for Bills fans to see their team win a Super Bowl, you truly don't have a soul. Congrats on ringing the bell and the picture perfect table crushing, Victor. Here's to millions of more tables feeling the wrath of Bills Mafia over the next few weeks and people battling that retched disease ringing the hell out of their bells because as always, #FuckCancer.

Speaking of which, I had to pass this story along because it is completely heartbreaking and is the closest thing to a real nightmare that I have ever heard.