FUCK OFF BONDS YOU CHEATING SCUMBAG!!!

Real talk - There're a lot of people that will say that Hank Aaron is the true home run king and that Barry Bonds' current possession of the crown is illegitimate due to his steroid use. To that I say nope! Hammerin' Hank himself acknowledged Bonds as the record holder and that is ALL YOU NEED TO KNOW:

And that's even if it was "hard to digest" for Hank himself:

But records schmecords. When you're as good as Henry Aaron Hank Aaron is an all time great any way you slice it. Take one peep at his Fangraphs' profile and stare in awe at how good he was for a LONG time: 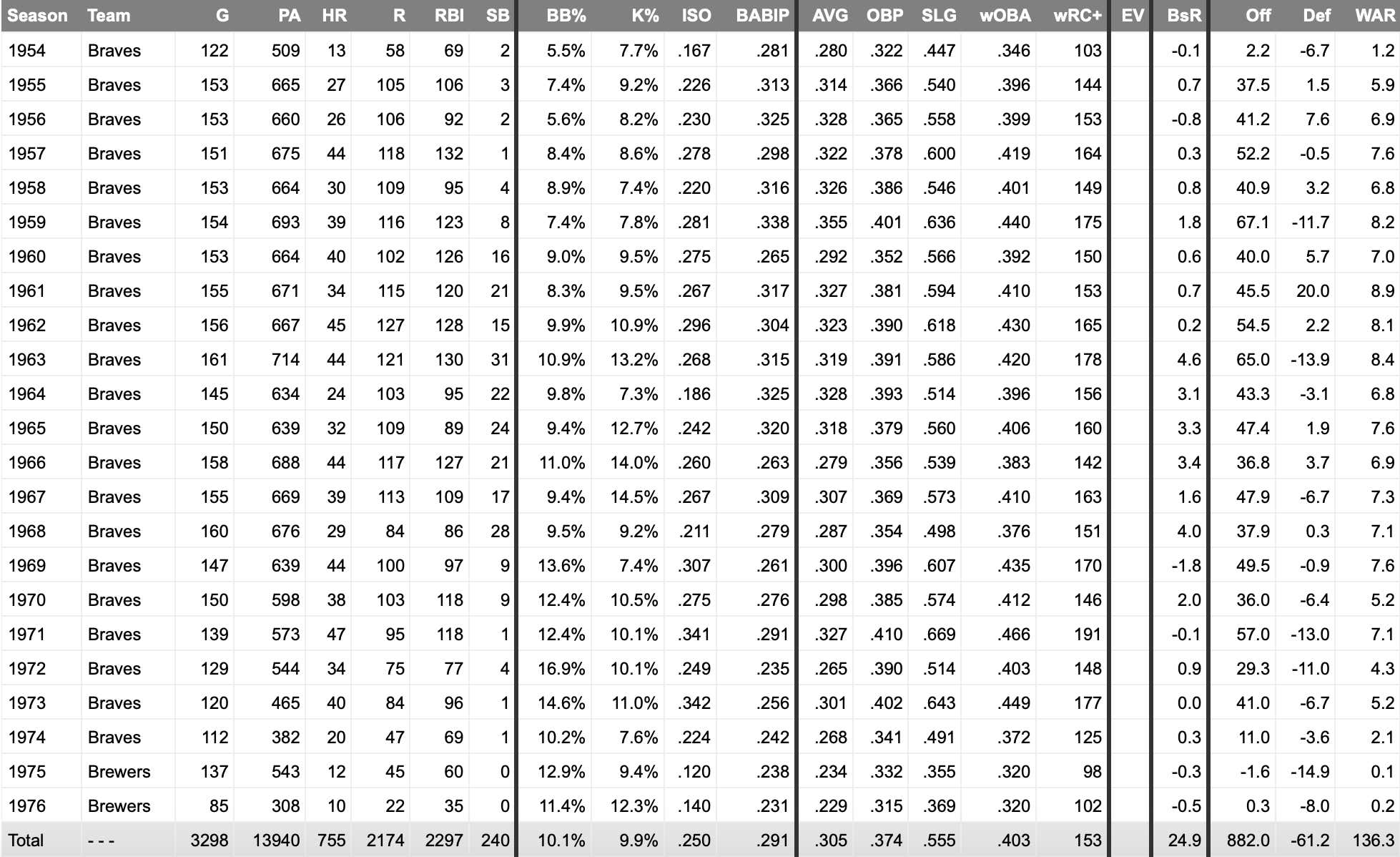 You just do not see that kind of longevity anymore. Not even CLOSE. If you're 30 years old, you're considered past your prime in today's era of baseball and really sports in general. Henry Aaron hit 413 dingers after he turned 30. The dude was a machine: he still is the all time record holder for RBIs with 2174 of them, went to a record 21 all star games, won an MVP, had 3771 career hits a career .305/.374/.555/.928 slash line, and 6856 career total bases, and he did so in the Deep South and shortly after baseball was integrated. Not easy, not easy at all. He had to have the mental fortitude of a goddamn marine to put up the freak numbers that he did while also battling everything he did because of his skin tone. They just don't make 'em like that too often anymore.

But back to the "who is the true home run king?" debate - it's a lazy, half assed answer, but who really cares? Hank Aaron is an all time great. Barry Bonds is an all time great. One has been enshrined in Cooperstown as a baseball immortal and the other should be and will be in due time. Forgive my Participation Culture bullshit, but that's my true and honest opinion on who is the true HR king. To me it just doesn't matter. It's all irrelevant, at least to me, because both of those players are considered two of the best players in the history of America's pastime and once you're that good, you're already a god amongst men so it is all meaningless.

Someone will break Bonds' record eventually, probably Luis Robert, Eloy Jimenez or maybe even Jose Abreu and maybe as early as this year for all three of them. Until that happens, let's pour one out for a true OG of the home run game - 33 years holding the most iconic record in American sports is an incredible lifetime feat. Hank Aaron willl always be a HR King. Maybe not the HR king, but definitely a home run king.

So rest easy King! You'll be missed. What a great life you lived.