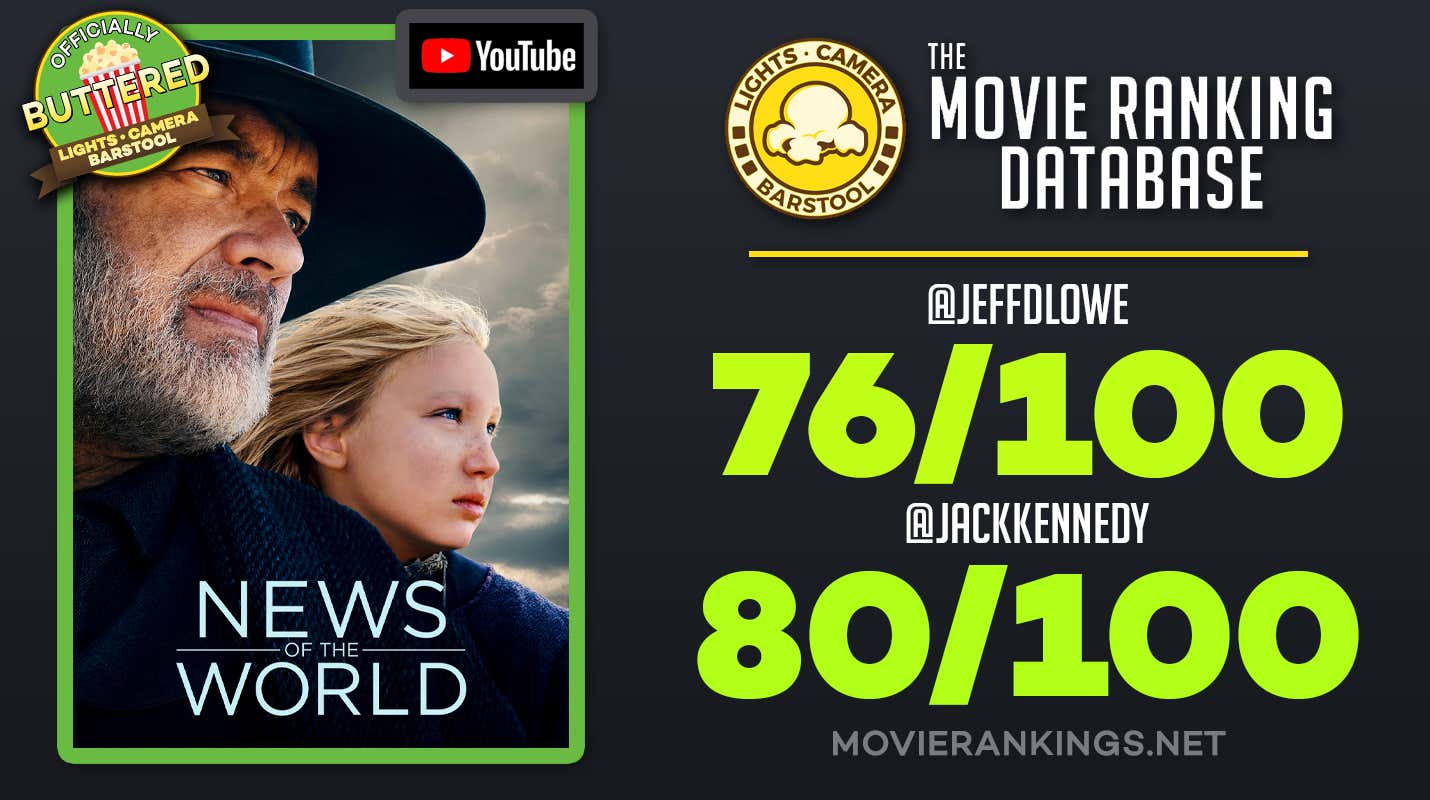 We are reviewing this movie in full on our newest podcast...

Five years after the end of the Civil War, Capt. Jefferson Kyle Kidd crosses paths with a 10-year-old girl taken by the Kiowa people. Forced to return to her aunt and uncle, Kidd agrees to escort the child across the harsh and unforgiving plains of Texas. However, the long journey soon turns into a fight for survival as the traveling companions encounter danger at every turn -- both human and natural. (via Google)

JeffDLowe (76/100): 'News of the World' looks the part of a grand, dramatic, Western epic, but ultimately treads water with a handful of interesting moments wrapped inside a boring movie. Unlike their previous release with the thrilling 'Captain Phillips', the newest collaboration between Paul Greengrass and Tom Hanks leaves little impact or impression when it is all said and done.

Avoiding letting hype ruin your movie-watching experience is key, especially in the social media era. But I'd be hard-pressed to not admit that I expected a little more from 'News of the World' solely based on pre-release Oscars chatter. This movie is worth sitting down and watching at some point, it's by no means terrible and the reviews suggest it'll grab some Oscars buzz, but it didn't close to clearing that bar of "one the year's best movies" for me.

There are enough elements that pop to keep the movie going, with some wonderful visual elements and a few scenes that will provide an emotional pull. Tom Hanks even brings home a solid enough performance, albeit not one that will blow you away, either. And there lies the issue I had with the movie, there isn't much there that truly stands out. It feels predictable, and, most of all, lacks any sort of freshness for the genre or this type of story.

I have no problem with a movie that can be a slower burn at times or, an epic tale with a wide lens story drenched in emotion and intrigue… but we just don't really get any of that with 'News of the World'. The least predictable thing about the movie for me was the ending, and I don't really mean that as a compliment. I expected that, despite feeling like a bore at times, the movie would stick its landing with a big punch to bring it all home. But, unfortunately, it doesn't. I don't really want to spoil anything, but I'll just say that "unsatisfying" is a word you might toss around when the credits roll.

There is certainly enough present to make 'News of the World' a movie that doesn't totally waste your time, but factoring in the hype, the big names involved, and much more, I expected much more from the latest Paul Greengrass-Tom Hanks release.

KenJac (76/100): What annoys me with ‘News of the World’ is that the pieces are there for an awesome movie. Tom Hanks gives a solid performance, there is a newcomer child actress (Helena Zengel) that holds her own against him. The set pieces look great and the soundtrack matches the scenic beauty of the old west incredibly well. The problem is that the movie is simply not that interesting.

Tom Hanks bears the weight of the movie on his shoulders, as you might expect. His acting fits the character, but more of the problem is that the character is just not all that interesting. Captain Kidd is this morally infallible guy with an immovable moral compass, which is partially a staple of old-timey westerns. But what those movies have which this doesn’t is intrigue. A sense of action and adventure which fits that type of character. This movie doesn’t have that and is more about the hopelessness of the old west. There’s nothing wrong with that, but this movie is just missing that extra something to take it over the edge.

On the technical side, the movie is undeniably gorgeous. You get all those beautiful old west scenery moments and the action we get is well shot. Paul Greengrass is obviously more associated with shaky-cam action stuff like the Bourne movies, so seeing him do more of a traditional-style movie was cool. The Soundtrack from James Newton Howard was also tremendous. The biggest and most pleasant surprise was Helena Zengel. With child actors, I usually go into it with a low expectation. As long as they don’t fuck up, it’s a win. Zengel was legitimately good, though, and had an individually stunning performance opposite one of the better actors of all time.

--
The movie is Officially Buttered, as it's not great, but certainly qualifies as an "okay" movie. You can head to Lights Camera Barstool right here to listen to our latest episode where we will be reviewing this movie for our mid-week review.