It wasn't all that long ago in actual years, but eons ago in terms of the culture, that one of the most commonly used cliches was, "Behind every successful man, there is a strong woman." I for one am glad we retired that one in my lifetime. I'm a much bigger fan of the idea that every successful man has a strong, independent, confident, badass woman (or man) standing shoulder-to-shoulder next to him ready to throw down any time someone comes after the man she (or he) loves. Someone who's ready to go mother (father) bear any time someone attacks her (his) own. Someone like Linda Holliday.

A few weeks ago, she posted a thoughtful, reflective look back at the previous year of challenges and personal loss on what around her dinner table is referred to as InstaFace:

Nothing controversial. Not taking sides or anything. Just the kind of pensive, contemplative ruminations we all did at the end of 2020. Only better written than whatever you posted on your YouFace December 31st.

But this is the internet. Linda Holliday has 61,000 followers. So by the laws of social media and math, someone was going to see an opening to stick a knife in her man and tried to take it. Only to pull back a bloody stump where their arm used to be: 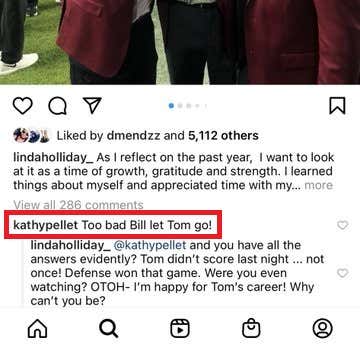 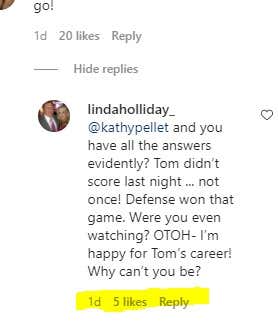 And the referee … STOPS THE CONTEST! You do NOT jump into Linda Holliday's MyFace comments and start getting all up in her man's business without paying the price. And while it's not technically true that Tom Brady didn't score, she circled back to clarify: 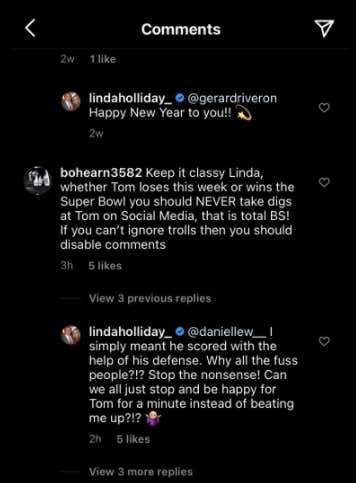 You can't argue she's wrong. All three of Brady's touchdowns came on short fields. Those drives were all set up by turnovers and started at the New Orleans' 3, the New Orleans 40 and the New Orleans 20. The fact she pointed this out doesn't mean she is not happy for Brady's success. She's just giving the facts and letting the @kathypellets of the world make up their own mind. More importantly, she's fighting for the man she loves, and that we all love, and you can't help but be grateful he's got her alongside, ready to throw haymakers at these ingrates who don't appreciate all that he has created.

I just hope Linda and Bill are saving these receipts. Because with a high draft pick and a large sum of money to spend in a depressed free agent market, there will be a reckoning. Then they'll be the ones making the fuss, not just Ms. Holliday's followers on Pandorama.