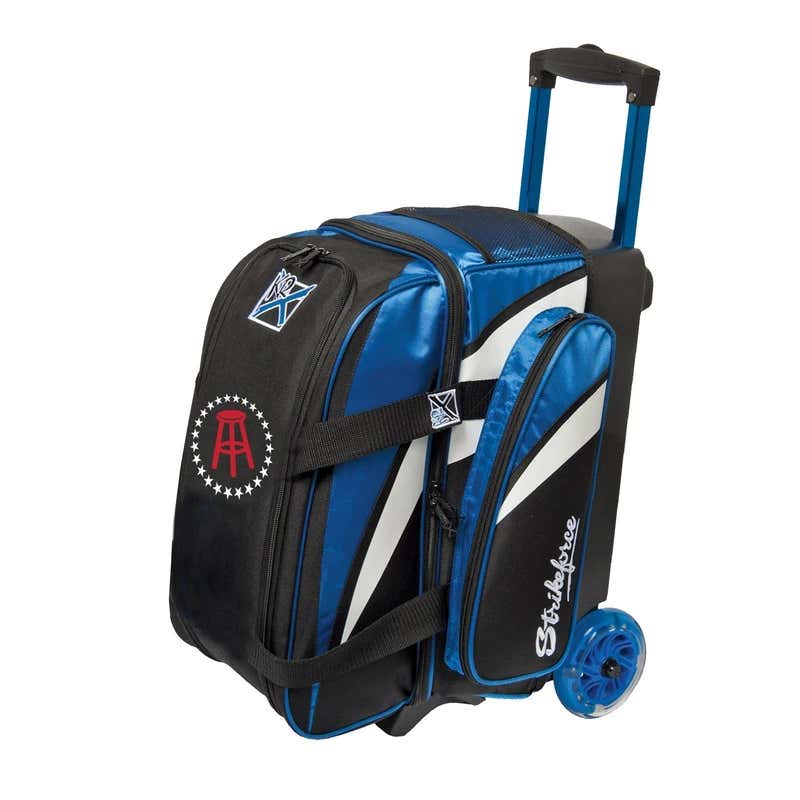 I know we throw some big time exaggerations around here all day everyday but honestly guys this is a no bullshit blog. I'm shooting you straight from the hip when I say this double barrel KR cruiser roller is the most beautiful thing I've ever seen. I'm talking urethane wheels for a smooth roll, separate shoe compartment for two pairs (tournament edition), large accessory pocket for essentials and of course the 36 inch retractable locking handle to maneuver the cargo. Embroidered Barstool alongside industry leader KR Strikeforce logo to let the babes know it's legit. I mean I could honestly go all night if you guys let me. I won't but you get the point.

Some more exciting news in the Barstool Bowling world. I was on site in Wisconsin for PBA Players Championship Regional play this past weekend and got a big bold taste of life on tour. New York Tom is chopping up the footage which means there's going to be a well edited video coming next Friday. For now I figure I can run back some highlights from the weekend the old fashioned way: black & white text.

(Btw I'm probably going to repurpose the following text as another blog tomorrow morning. Don't moan and bitch about it when you see it again please.)

- 2021 PBA Players Championship: Before we get to any observations, it's important we understand the setting. We're talking about the 2021 PBA Players Championship. It's the first Major Tournament of the season. Normally there'd be 100 guys at one location, but COVID forced it to a regional format meaning the PBA held 5 separate tournaments over the weekend spread across the country. And instead of 100 total bowlers, they had between 70-90 at each site, so about 4x the size of the field. While unfortunate for the top guys, I like it because there are a lot of great regional bowlers that don't compete year round. There's more bites at the apple and some quality seasoned veterans that end up in the mix. That's nice.

Under this format, the top-5 scores from this weekend at each regional tournament advance to a championship in Florida. Winner takes home $250,000. They're broadcasting that on FOX next month and you better fucking believe I'll be all over it. For now it's just important that we get our heads wrapped around regional play. Wisconsin had 72 guys vying for the top 5 spots.

- Tournament Set Up: This was my first major regional tournament set up so everything was brand new to me. I was lucky a couple weeks ago to meet up with Sean Rash, AJ Johnson and Kris Prather to do a practice session under tournament conditions and even then I still was extremely confused. After having spent my Saturday up there, everything makes a lot more sense. I'll do my best to break it down.

For starters there are 28 games. TWENTY EIGHT. That's an absolute staggering amount of shots, and they're spread out in groups of 7 for this tournament. Each group is called a Block, so there's four total blocks. You bowl 7 straight games Saturday morning then get a two hour break. Each game you alternate frames on two lanes, so a single block means you bowl on 14 different lanes. As we've learned before, each lane is different for a variety of reasons known as science and physics.

And as you probably guessed (no shot anyone guessed this), each block gets its own oil pattern, and each oil pattern varies in length. So you can technically think of these Blocks as playing 4 different golf courses, with each lane being their own hole. It's not exactly like that, but I'm not crazy for trying to make this analogy as relatable as possible.

- Quiet On The Lanes: I'll let the video do almost all of the talking, but I'd be remiss not to tell you guys that I fucked up so bad when we got there. I'm wearing a mask and doing the intro in front of lanes 1-2. Unbeknownst to me, I'm loud as fuck while some guy is in the 10th frame on the 5th lane. Not long after a mob formed behind me and someone told me to suck a dick/his dick. It was awesome. I apologized profusely and the next guy buried a strike. But still there's no excuses for mistakes like that just kidding those mistakes are what make life great. Iron sharpens iron.

- Beers: I was ordering Miller Lites at the bar and they were serving me. I was watching NFL playoffs in the background. I was knee deep in the best bowlers across the entire central part of the United States. It was a brief yet fruitful taste of the good life and I've never been more thirsty for its return. Yeah yeah yeah protocols this and that. Negative tests and temperature checks. Spare me your hole poking, this bird was Air Force One tight with COVID controls. I'm just saying it was good to just feel like a man in this world that so desperately wants me to be a flowering puss. Fuck that. The beers were delicious.

- Competition: Some of the absolute best dudes in the world under one roof. Then a lot of up-and-comers. Then some more veterans mixed with regional stars. It was a site to behold. Something about all these generations of dudes after the same goal just warms my heart. Like find me another sport where you have such transcendent competitive camaraderie. You can't.

To that end, super cool of Sean Rash to let me hang out with him during his 2nd block. We're talking about one of the greatest active bowlers. A slam dunk hall of famer and all around awesome guy. He's been helping me get my sea legs across the sport and he wants to give Barstool some credibility in a space we have exactly ahem zero of which right now. On Saturday that meant literally sitting with him as he bowled the 2nd game of the 2nd block. I've done some pretty cool shit in this job and across my life with sports. Doing a shot-for-shot strategy with Sean in the middle of a million dollar tournament certainly ranks right up there.

In that spirit, I have no problem being the team mom except instead of apple slices the cooler is loaded with miller lite. And instead of cheering you up I just talk relentless shit to you. That would be some funny stuff.

- Miscellaneous: Someone accidentally took another guy's shoes after the break. For a minute there was a big panic, but they were recovered. Another thing I found staggering was ball volume. Some guys brought 15-20 different balls to the lanes for the 4 different patterns. That's like 300 pounds of balls per guy which is a lot of weight to be hauling around for 28 games.

Finally I think it's safe to say I'll be doing some more stuff on the lanes in 2021. Looking to do the national tournament mirrored after the Barstool Classic. Looking to get some more merch out there and some video stuff with the PBA. Would be cool to maybe get one of you in a showdown against one of these guys for like $10k or something. I know a sportsbook that would probably be in a position to take action on it. The possibilities are endless if you really think about it. Going to be a fun journey.

For now go check out some of the stuff in the store. It's legit.