Welcome back #ReagsReaders. We're back with another solid Tuesday slate and honestly it just makes me miss the true old Big Monday days. We used to get loaded games on Big Monday with Raft/Bilas/McDonough (the best trio crew ever) on the Big East call. We need to figure out something because Monday's are too slow now. We get the ACC/Big 12 game and while the Big 12 tends to deliver, the last two years the ACC has been down giving us a mediocre game. That said, Florida State is a team we need to talk about more. The top of the ACC is weird this year. There's no dominant team. It's a debate if you think Virginia, FSU, Louisville,Virginia Tech or Clemson is the best team. For me it's either Virginia or FSU. The Noles were shut down and didn't play from December 29 until January 13. The star freshman Scottie Barnes has been banged up. But here they are at 8-2 with losses to UCF and Clemson, wins over Indiana, Florida, Louisville and UNC. What Leonard Hamilton has done, calling it a 'new blood' has been ridiculous. They are sending guys to the pros. They bring in these 7-footers that can move and defend. They run that press and jump while protecting the rim. This is a team we need to have an eye on as we get  closer to March. Onto today. 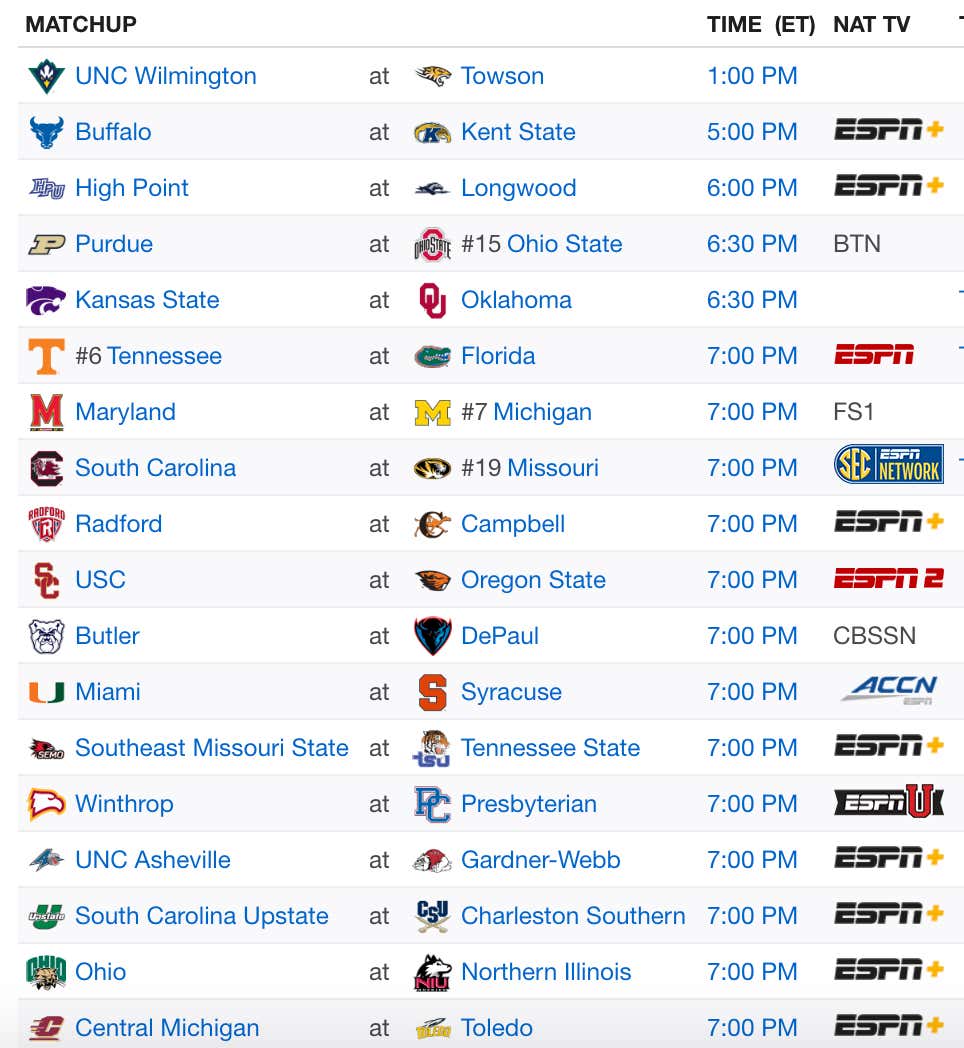 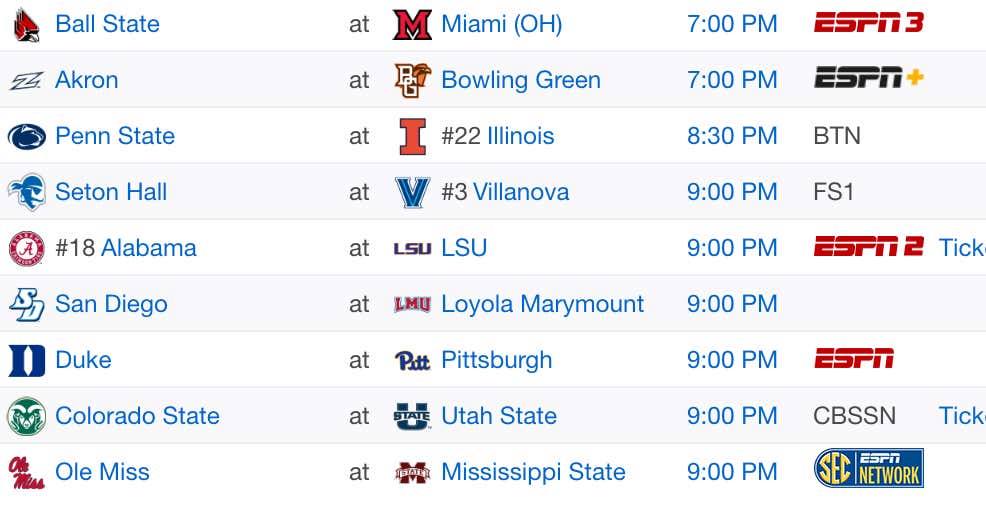 Reasoning: Two teams that are starting to make a push to the top of the Big 10. The main reason for Ohio State? EJ Liddell. He's a stretch big and we saw what he could do against Illinois on Saturday. His ability to step out and shoot, finish in the post and defend other bigs is huge. But if he's missing shots and the lane stays clogged, the Ohio State offense can be stagnant. That's what happened against Purdue earlier this season when they lost by seven and Liddell didn't play. Ohio State was just 6-for-24 from three and scored just 60. Purdue's defense is designed to give up shots from three (337th in the country in 3PA/FGA) but they challenge them. It's similar to what you see with the packline defense, but they don't run it. I'll take Purdue with the points here.

Reasoning: These two teams played earlier this year, Michigan won by 1. The biggest reason? Maryland really struggles defending bigs and Michigan has one of the best in the conference/country in Hunter Dickinson. The other big reason has been the development of Franz Wagner. He's turned into one of the best 2-way players in the country and does an unreal job of breaking up PnR defensively with his size and ability to switch. Defensively, Michigan is 3rd in the country in 2pt percentage. Do you trust Maryland to make enough threes here? Not to mention this is a prime bounceback spot for Michigan. They got their ass kicked by Minnesota and now come home to Maryland. If Michigan is a dominant team, they blow Maryland out.

Game is at 7pm at Syracuse

Reasoning: Syracuse's defense is an absolute disaster. Don't believe me, how about from the mouth of Boeheim?

Seems positive! Miami might have the worst injury luck in the country too. They just can't get to full strength and despite that they still have wins over Purdue, Louisville and at NC State. Miami should be able to kill Syracuse on the offensive glass. Cuse is 291st in the country in defensive rebounding percentage and Miami is an above average offensive rebounding team. The other key is Miami doesn't foul defensively. That lets them run with the short depth and keep guys like Isaiah Wong and Harlond Beverley out there. Cuse is 3-3 in its last 6 games with an OT win over Buffalo, a 6 point win over Northeastern and a 5 point win over Georgetown. Something isn't right with this team so I'll take the points.

Game is at 9pm at LSU

Reasoning: Is it terrifying betting on Alabama? Yep. They rely so much on the 3pt ball that one cold shooting night and you're cooked. Not to mention LSU is a damn good team. But here's what Bama has going for them. Herb Jones, who might be the best defender in the SEC, is playing. That means you can put him either on Cam Thomas or Trenton Watford and really disrupt what LSU likes to run. LSU is just 0-2 in top-40 games this year. Their best win is Arkansas at 42. In just conference games, Alabama is the No. 1 defensive team in the SEC. They take away the 3pt line and protect the rim. Both teams here will crash the offensive glass and give up rebounds defensively. Bama is shooting 39% from three in SEC play and that's in large part to Josh Primo and Jaden Shackelford. They can beat you with 5 guys. So, yes, it's terrifying but we'll take the Tide one more time here.

Game is at 9pm at Pitt

Reasoning: Are we sure Duke is better than Pitt? I'm not even trolling, it's a legit question. Looking at the numbers here, the advantage Duke typically has - the 3pt ball, getting to the free throw line and offensive rebounding are gone. They rank 328th at getting to the line. They are shooting just 34% from the three point line as a team. They are rebounding the ball well - 37th in the country, but Pitt is a good defensive rebounding team. So where's the advantage for a team giving points? Look on the other side of the ball. Pitt is the 13th best offensive rebounding team in the country and they want to get to the paint. Duke really struggles defensively inside the arc. They run teams off the 3pt line which works, but Pitt wants to slash. They also don't have a great matchup for Justin Champagnie, the 6'6" star for Pitt. He's got the height over Wendell Moore and the quickness if they try to put Hurt on him.

Game is at 9pm at Villanova

Reasoning: We're going back to the well here. Nova hasn't played since December 23. Are they better than Seton Hall? Without a doubt. But a team with that long of a layoff is someone I'm going to fade in the first game back. They were actually shut down in quarantine too. It wasn't where they could still practice, not play, etc. That makes me go to the fade quicker. It makes you wonder just where Nova's conditioning is, especially with a shorter bench. Nova can take advantage with JRE in the PnR, but will they be able to defend the spread out offense Seton Hall with Mamu? Seton Hall is also pretty good at running you off the 3pt line, something they'll have to do against Nova without giving too much help in the post.