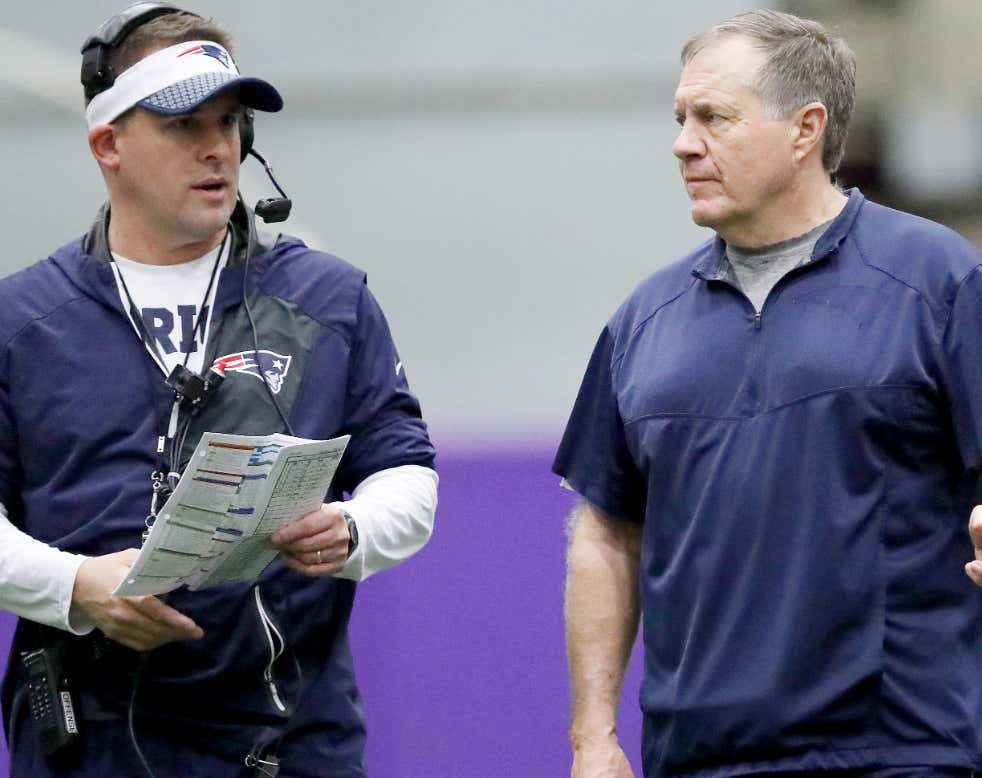 One, it seems like Josh McDaniels is a bit of a late entry into the Philadelphia Head Coach Sweepstakes. Two, and more importantly, is it remotely possible they'd pass on him after marathon interview session like this one?

Let's look at this conservatively. "Mid-morning" is sort of vague so we'll say it started at 11 a.m. With an end at 9 p.m. we are talking about a 10 hour conversation. And that's on the low end. Think about that for a hot second. When was the last time you talked to the same person for 10 straight hours about anything. There are peace talks among warring nations that don't last that long. Richard Nixon's interview with David Frost lasted almost 29 hours, but they broke it up into a dozen meetings over four weeks. With colleges back in session the beguiling Irish Rose and I are empty nesters again in a world where everyone's social life is on hold. But between the football playoffs and the US Figure Skating Championships on this weekend, I'm not sure we talked for an hour total. For certain it wasn't for 10 (or more) uninterrupted hours, I can promise you that. At most we have a hard time cracking the 30 minute barrier over dinner because by then I get distracted by her complaints about work and start referencing other comics' old stand-up bits and she tunes me out. And she's my favorite person in the world. So I can't imagine how hard it would be to engage with another human being for that long a period of time unless you were really, really smitten with each other.

Seriously, what could be worthy of that much talk? I admit the job of a head football coach is a complicated one. But not that complicated. Ten hours is equal to an entire season of "The Boys." You could learn the basics of a foreign language in 10 hours. Listen to an entire John Grisham audiobook. Have my old boss at the courthouse start one of his lawyer stories and actually get to the point. (Possibly. It's never been attempted.) The point is, that's a long time. Unless the Eagles and McDaniels took long breaks to watch the playoff games and possibly some naps, it's pretty damned unlikely they didn't connect in a deep, personal way.

Here's what my go-to source for Philly's coaching search Philly Voice has to say about McDaniels' candidacy:

McDaniels ruled with an iron fist, and his tenure with the Broncos was turbulent from start to finish. … He immediately clashed with a number players, most notably starting quarterback Jay Cutler, who was traded for Kyle Orton and draft picks. He also reportedly did not get along with some assistant coaches, including defensive coordinator Mike Nolan, who left after one season with McDaniels. …

He immediately clashed with a number players, most notably starting quarterback Jay Cutler, who was traded for Kyle Orton and draft picks. He also reportedly did not get along with some assistant coaches. … If the Eagles are looking to rattle the cages of their players, who may have become accustomed to a player-friendly approach taken by Doug Pederson and the majority of his assistants, then McDaniels would be a coach who is not afraid to do that kind of dirty work.

A fair take. And the idea the Eagles would give him the job because they think the organization need a major attitude adjustment is an interesting one. I don't buy that because I don't think that's how McDaniels is wired and the Denver situation had a lot more to do with the team being in serious financial trouble and guys not getting paid on time than him being a tough guy who alienated everyone. To the extent he did, I assume he's learned from those mistakes over 10 years. Like the Patriots always preach, you can make errors, just don't be an error repeater.

Assuming they do hire him - which I am - it'll be a blow to the Patriots but not one they're unprepared for. This isn't some guy who just got hired and left before he hung the diplomas and family photos in the office. This is his second tour of duty in New England and it began a lifetime ago. Coordinators who win three rings don't stick around this long. He took the Colts job two years ago and then famously untook it. Granted, after the way his offense struggled this past year it's a bit of a surprise he'd get a head job this year, but it's been overdue for a while. My guess is someone who's been in the organization before like Chad O'Shea would get the job. But there are a lot of twigs, branches and limbs on Belichick's coaching tree. But we'll see.

The only logical conclusion after an all day interview sesh is that McDaniels is as good as gone. Unless. Unless there's someone in the Philly organization with ties to the Colts. Maybe someone who was screwed over when he reneged on the offer or who cares about someone who was. And this whole day was designed to deliberately waste McDaniels time just to fuck with him and give him a taste of how it feels to think you got something only to have it taken away. If so, I admire the craftiness of it. Revenge is a dish best served cold and all that. But in all likelihood, he's getting the job.