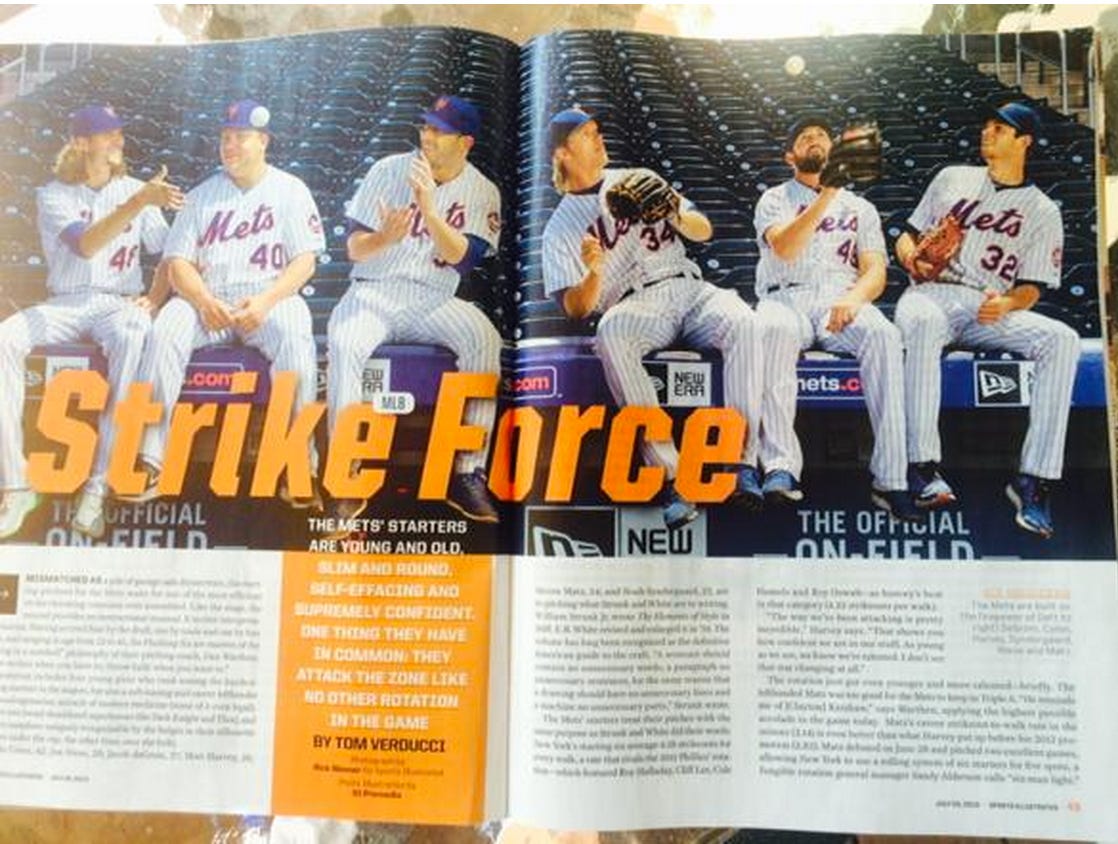 NYDN – It’s tough to put a ceiling on what the Mets’ pitching staff can achieve. Matt Harvey, Jacob deGrom, Noah Syndergaard and Steven Matz all combine youth and potential with hard, nasty stuff that, with some offense, could lead the Mets into an era of prosperity. And while the quartet has yet to produce any concrete results outside of a couple All-Star appearances and a Rookie of the Year Award, John Smoltz — who will be officially inducted into the National Baseball Hall of Fame next weekend and pitched on arguably the greatest starting staff of all time with the Braves in the early-to-mid ’90s — didn’t shy away from offering some serious praise for the Mets’ big arms. “They’re way better,” Smoltz said of the Mets in comparison to his Braves rotation, which featured five elite pitchers all under the age of 30, including Hall of Famers Greg Maddux and Tom Glavine. “They’ve got more talent than we could ever have.” Still, Smoltz questioned whether the Mets pitchers could compile the same kind of careers the Braves starters did because of the current climate of the game — from innings limits to Tommy John surgery.  “The opportunities that exist today won’t allow a lot of staffs to find out what kind of staff they can be. That’s the shame of the game. The injuries have taken over. The inability to learn how to pitch (and) fast-tracking a lot of kids,” Smoltz said. “There’s no doubt that the dynamic arms are way better than we’ve ever seen. And the issue is how long can we keep them healthy and how long can they stick together financially? What we did in the era that we did, we take a lot of pride in it. We worked really hard and we didn’t miss a lot of starts. “We’ve anointed people a little too quickly in this game. And they don’t have the ability to wait and learn and have a fair shake at the game. . . . Everybody wants quick results, expectations through the roof. And that’s what these guys are fighting today. They’re not giving them a chance to fail too often. And when they do, what happens?”

Nobody exalts this pitching staff more than me. Nobody says their potential is higher than I do. I genuinely think there are 4 #1 pitchers in the making and another returning from injury next season. It absolutely CANNOT be understated that with the offense the Mets have, they should be the worst team in the league. Yet because of their pitching their only 2 games out at the break. Its almost like Lebron in the Finals when people looked around and said “The guys hes playing with would actually be the worst team in basketball.” Thats how bad the Mets offense and defense is. They would be battling the Phillies for the bottom of the NL east and the bottom of the barrel for all of baseball. So I know if you dont watch the Mets or read up on them anywhere else but here, from me, on Barstool, you probably think its all dick riding and hype. Its not. Its really, really really not. They are that good. To be 47-42 and 2 games out with the slop that they have backing them is truly, truly remarkable.

But when you start throwing around comparisons to the 1990s Braves, you gotta tread lightly. I think Smoltz comments were more about raw ability than anything. All these guys able to touch 100 on the gun and mixing in an array of vicious breaking ball stuff. Their actual arms were better. But when you wanna start comparing careers, its obviously apples and oranges. I’m not saying Smoltz is absolutely wrong. I’m just saying theres no way to tell yet.  First of all, right off the bat, none of them are Greg Maddux. There may be another Greg Maddux. Greg Maddux is probably the best pitcher of all time. If he did it with a little more flash and pizzazz like Pedro I think it would be more of an open and shut case for him as the GOAT. But the way Greg Maddux operated is just on another level from any of these guys, no matter how good these Mets arms pan out.

Obviously nobody is coming near Mad Dog’s 355 wins either. 300 wins is probably dead. None of them are winning 300, period. Glavine (305-203) and Smoltz we know never reached 3 hundo but has that weird 150-150 record since he became a closer too (213-155 as a starter, 154 saves as a closer) Impressive in its own right but only a benchmark that unfortunately came about out necessity. Maddux has 3 Cy Youngs, Glavine 2, Smoltz 1. At any given era during their early to mid 90s run, the Cy Young belonged to them. Their accolades are incomparable.

The other thing to consider is the success these guys had. During the Braves reign of terror (We’ll start it in 1988 when Glavine and Smolz were there, Maddux didnt arrive until 1993) They lost the World Series in 91 and 92, lost in the NLCS in 93, strike in 94, won their one World Series 95, got back there in 96 and lost to the Yankees, two more NLCS losses (this time with NLDS sweeps to boot) in 97, 98 and then got smoked by the Yankees again in 99. Now for a team of their caliber they’re often called choke artists but thats a pretty goddam good run when you’re comparing them to a group of 5 kids who, even though they havent had the chance yet, havent even sniffed post season ball.

Its apples and oranges at this point. I guess the main reason I say Smoltz is wrong is because the Braves did it. The Mets talk about it. The Braves did it. They won a ring. They played playoff ball every year. They won the awards. They did it year in and year out and barely missed starts. The Mets rotation finally blossomed and it was immediately met with 2 Tommy John injuries. Not that its exactly their fault, but the thought of making the playoffs and winning a title right now seem laughable. The Mets rotation are doing their jobs – at an alarmingly high level given some of the age and experience these guys have. But you look around the rest of the league and there are a LOT of incredible arms out there. Its a “Dead Ball Era” or a Golden Age of Pitching and so theres a lot of pitchers out there just as good if not better. The difference with the Mets being they all wear the same uniform. You can compare any one of those guys to the Sales and the Kershaws and what not, and they all pitch one after another for the same team. Something OUTRAGEOUSLY special and now the mainstream world is starting to see it.

It will probably be squandered. The Braves staff gets shit for not winning enough but thats because they made it there and ran into some pretty good damn teams though. Probably should have beat some more of them, yes. But they made it there. The Mets will probably, maybe, make like the second wild card once, acquire some more shitty aging bats like that will fix the problem and then when these pitchers contracts start expiring they’ll walk. They’ve fallen ass backwards into what could be a legendary pitching staff – one thats drawing comparisons already to maybe the greatest of all time – and the Wilpons wont do anything with it.

Also, we upgraded our Thor shirt and it is dope: 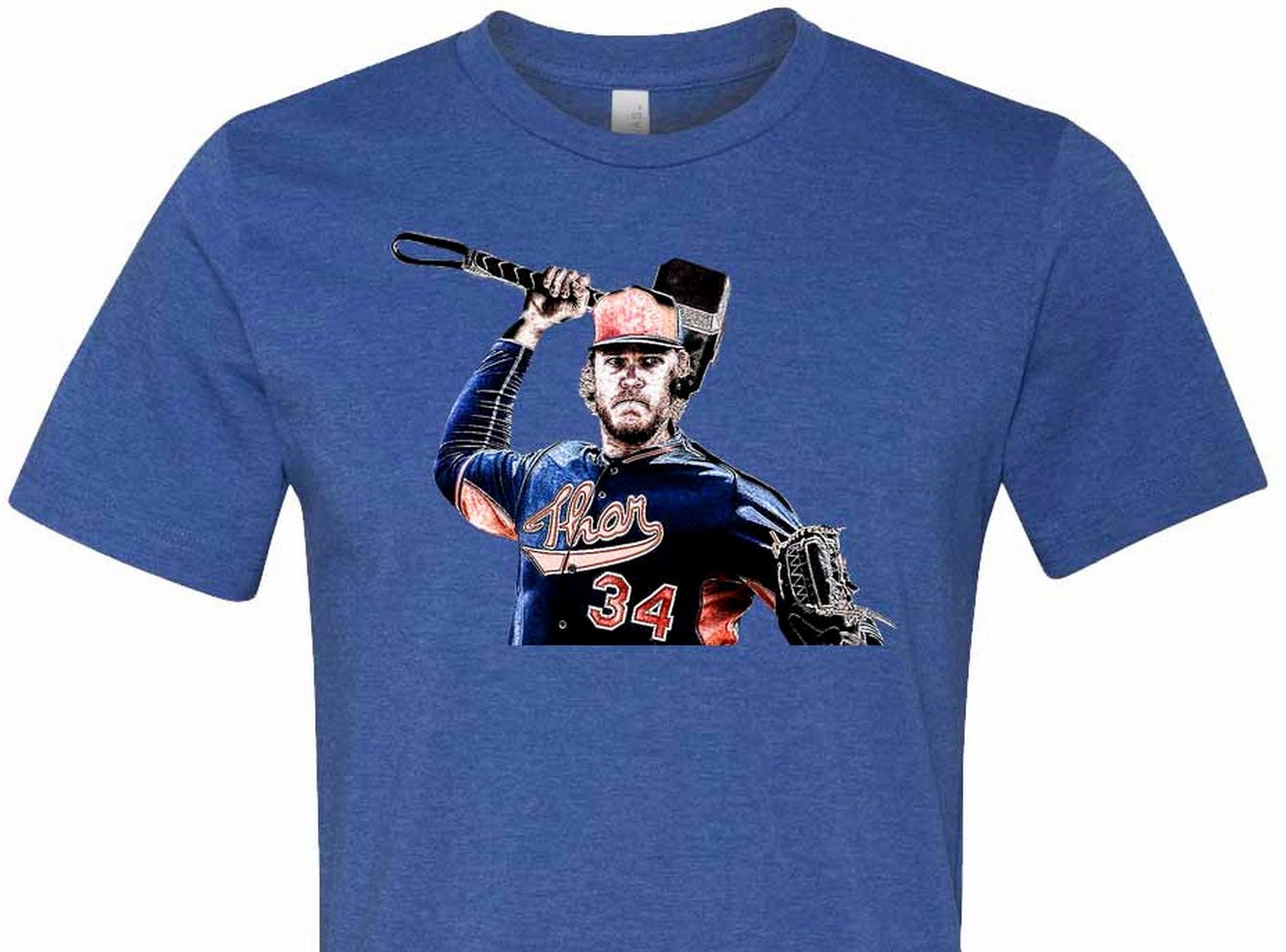