I was scrolling Twitter this afternoon when a quick little post caught my eye & made me question my morals a little.. 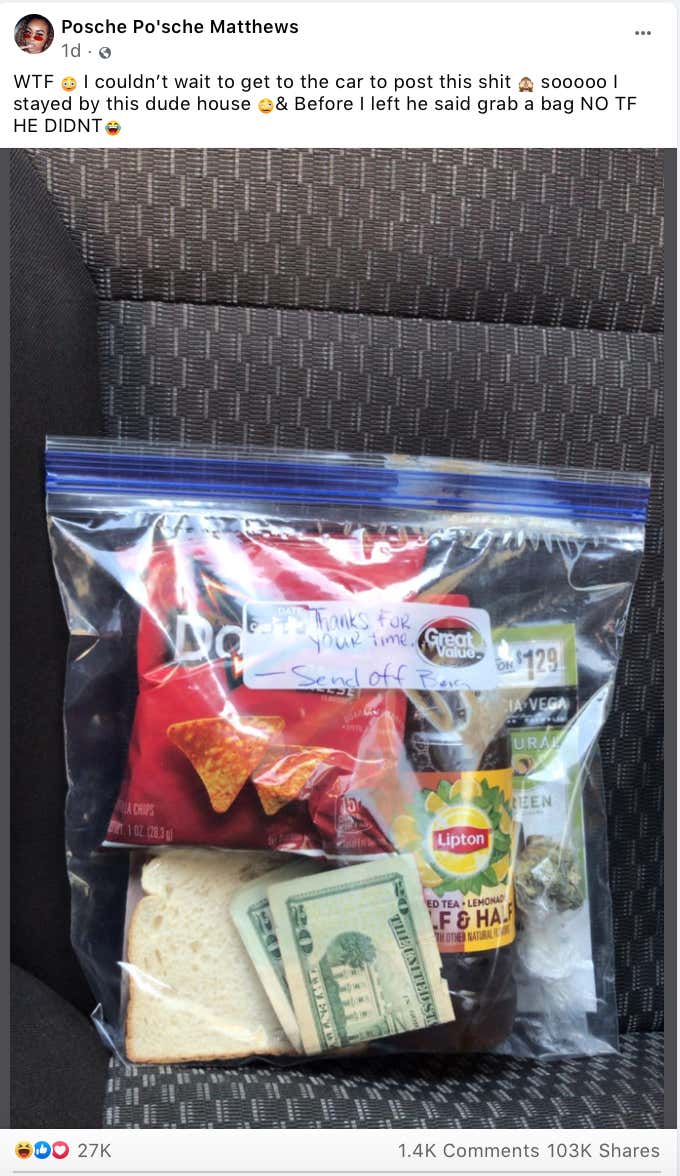 I went to the original FB source and it's got 27K likes and 103K shares after only a day on an otherwise normal, every day account. I loved that she knew this was too good not to share & I'm pretty sure it's genuine so let's take a closer look at those contents: 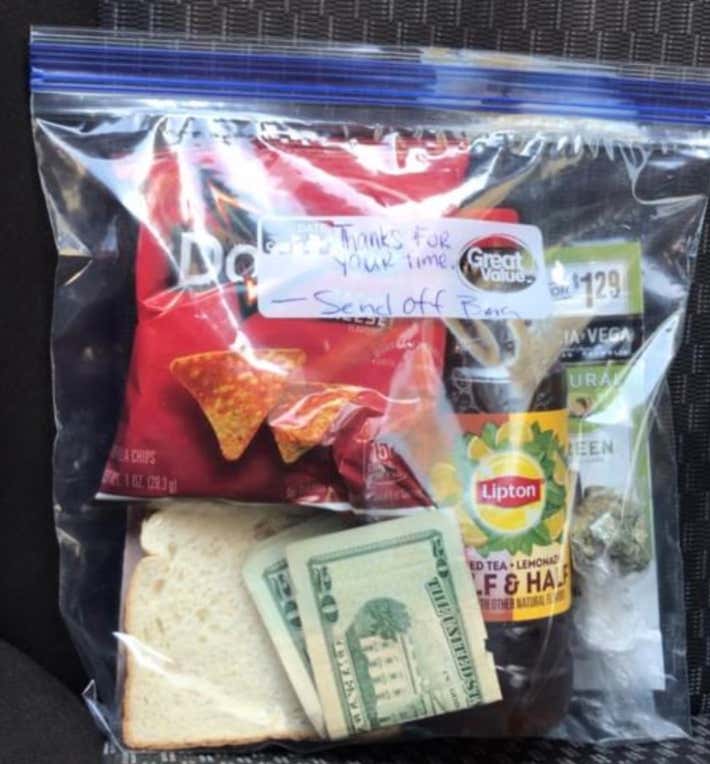 - 1 piece of white bread, crust on

- What I believe are pistachios

Back in my prime (a miraculous three month span in 2007 when there were plenty of beer goggles to go around) I recall it being an awkward 'wake up before they do & sneak out' sort of ordeal. No niceties, no goodbye, no acknowledging what had transpired the night before (a passionate evening of faking it to spare their ego because I didn't have a backbone) - just get the hell out of there before they or their roommates wake up so no one has to acknowledge what went down. It's weird.

So this 'send off bag' may not contain the perfect items, but I like the thoughtfulness! A true gentleman in every sense of the word who's not afraid to confront the realities of a quick hook up…

- Thirsty as hell because the end of a one-night-stand usually begins a hangover? He's got you.

- Piece of white bread in case you want to save that $40 so you take public transpo instead of a cab so you have to wait for a bus & there's going to be pigeons to feed at that bus stop to kill the time? Yup.

- Pistachios to let you know he's fancy & cares about your well-being? Love it.

- Plain Doritos that counteract the pistachios & let you know he knows you're still a little garbage deep down? Indeed!

I went around the office asking what the general consensus on this move was & much like my own reaction, people were supportive of it.

Big Ev & Marty Mush - "A little cringe but a little classy. It's a middle class Derek Jeter move." (They then went on to explain the whole Derek Jeter gift baskets thing.)

Kenjac - "It's more like the Fyre Fest version of the Derek Jeter gift basket. It's what Kurt Schilling would have ready to give women. If I was rich enough to give a good gift basket absolutely I would absolutely do something like this."

Marina - "I'd just be taking the $40. Please include I'm happily married now."

Jourdyn Berry - "I'd take the bag but ideally there'd be a small bible included because I'd be feeling guilty, too."

Zah - After a loud, enthusiastic 'whooping' sound - "It's incredible - I love that move. I might start doing that, too!"

So there you have it. Ladies, fellas, whoever you are - if you're a total Casanova with a revolving door of lovers but want to show you still have concern for them on some level as you whisk them off, get some Ziplock bags, some signature treats & have them ready to go in a tasteful basket. If I did this for guys I'd have a few sticks of gum, three Slim Jims, one S'mores Pop Tart in a smaller ziplock bag (sorry, you're not getting both), a small bottle of water, $5, a travel pack of Tylenol & a keychain with "Kate banged me & all I got was this lousy keychain & some Slim Jims" on it. Sadly I think those days are waaaaay behind me now, but if you have any suggestions please still let me know.

***UPDATE: It has come to my attention that it's cheese Doritos and me calling them plain Doritos has been upsetting to many, it's some sort of sandwich & not just one piece of white bread, and that what I thought was pistachios is a blunt wrap/nug of weed which shows you about how cool I am these days, and that I spelled Curt Schilling wrong, but I will not be correcting due to laziness. Apologies all around.