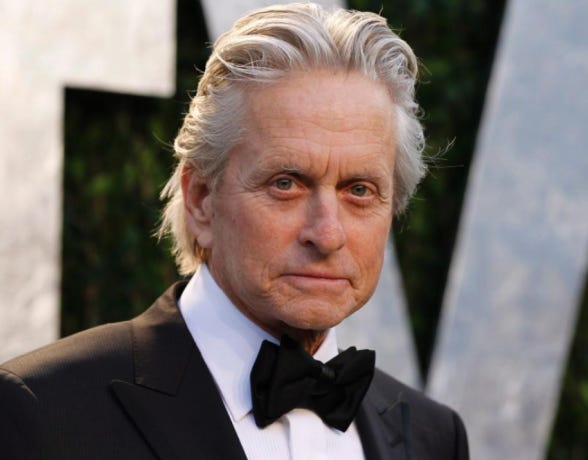 (Source) Well, now we really know what is lurking behind that candelabra. As a scientist in Ant-Man, Michael Douglas‘ character shrinks atoms and Paul Rudd, but in the bedroom there is nothing small about him. According to Page Six, while at the after party for Monday’s screening of Ant-Man, the 70-year old actor was asked by Vanity Fair about what famous feature has kept him in business for so long.

“Your father had his cleft chin. Omar Sharif had the gap in his teeth .?.?.” Vanity Fair’s George Wayne asked, to which a smiling Douglas responded, “I have a big dick.” Talk about ants in the pants! This isn’t the first time Douglas has talked candidly about his sex life. After staving off a scary battle with throat cancer, Douglas candidly revealed in 2013 that his cancer was caused by HPV [human papillomavirus] from performing oral sex.

You know how I know Michael Douglas doesn’t have a big dick? Because he goes around telling people that he does. Classic inferiority complex. Over compensating for something you don’t posses by brazenly telling everyone about it. It’s like real rich people vs fake rich people. Real rich people don’t walk around telling you how rich they are, they just know it, and don’t care. When you’re super rich, letting the world know how much money you make is the last thing you are concerned with. Fake rich people on the other hand constantly flaunt it. They flaunt their rental house vacations, or they take pictures of their super expensive dinner and hide the fact that they are drinking cheap wine. They tell you how rich they every chance they can, when in reality they’re just playing make believe for a month to over compensate for something else in their life. That’s the vibe I’m getting with Michael Douglas here. A wise man once told me “The loudest one in the room is the weakest one in the room”. That man was my grandfather. Just kidding it was Denzel Washington in American Gangster.