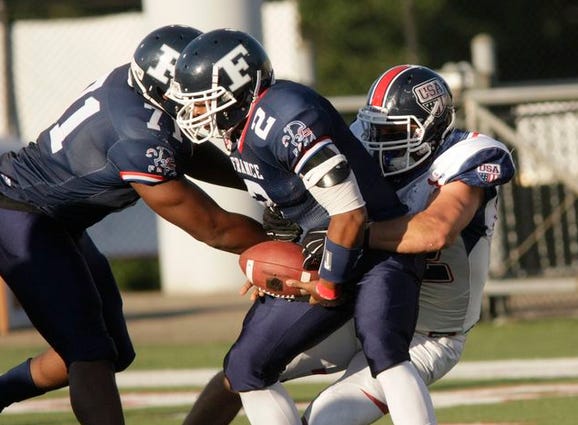 SB Nation - The United States played France in American football, and this might surprise you, but the United States won. By a lot. The final score was 82-0, with the United States scoring a touchdown on its first 12 drives before running out the clock to end the game. The game was part of the IFAF (International Federation of American Football) World Championship, being held in Canton, Ohio. Team USA had won its first two games of the tournament comfortably — they beat Mexico 30-6 and beat Japan 43-18 — but it was nothing like this. And it’s not like France is the worst football team in the world. They beat Australia 53-3, and Australia had previously beat South Korea 47-6. The French will go on to play Mexico in the bronze medal game. It’s worth noting that France’s starting QB, Paul Durand, was injured in the first few minutes of the game. America is 3-0 and will now face Japan in the gold medal game. The American team is comprised of recent college graduates not on NFL or CFL rosters, hoping to make an impression.

Hold mah dick, France! 82-0! Jesus. What a massacre. What a beatdown. I’m surprised halfway through the game we didn’t send in our own reinforcements to help France just out of habit. I will say I’m proud of France for even showing up. Can’t be a great feeling looking down at the schedule and seeing the US of A on there. I’m positive, like, 100% positive, we could round up us group of bloggers on this here website and beat France in Football. Give us a week to practice/for Pres to quit, and we’ll be golden. France should just stick to what they do best…uhhhhh…big long loaves of bread. They should stick to that.

PS: It’s about time to put American football into the Olympics. Just XFL it. Make it like they used to do with the other sports with no professionals. So sick of the argument that it’s not fair to the rest of the world because we are the only country that plays football. Well guess what, it’s not all sunshine for America either. China is over there breeding gymnasts in secret labs and nobody in this country plays cricket, so let us get football on the map. Maybe it’ll encourage those Euro countries to stop being such pussies and play a real sport.